how to aggregate from related issue?

Hi, the use case i have is:

there is an ORIGIN issue and some other issues (A,B,C) that are logically related (not linked) to ORIGIN.

i would like to run an automation that sets values A,B,C in ORIGIN.

been battling this for a while.

What do you mean by "logically related" for these issues?  Can you write a JQL statement to return those issues, based upon the triggering issue and some criteria?

If so, you should be able to use a JQL statement with a trigger or branch to get the issues needed for the update.

Please consider posting an image of the rule you are trying.  That may provide more context for the community to offer ideas.  Thanks! 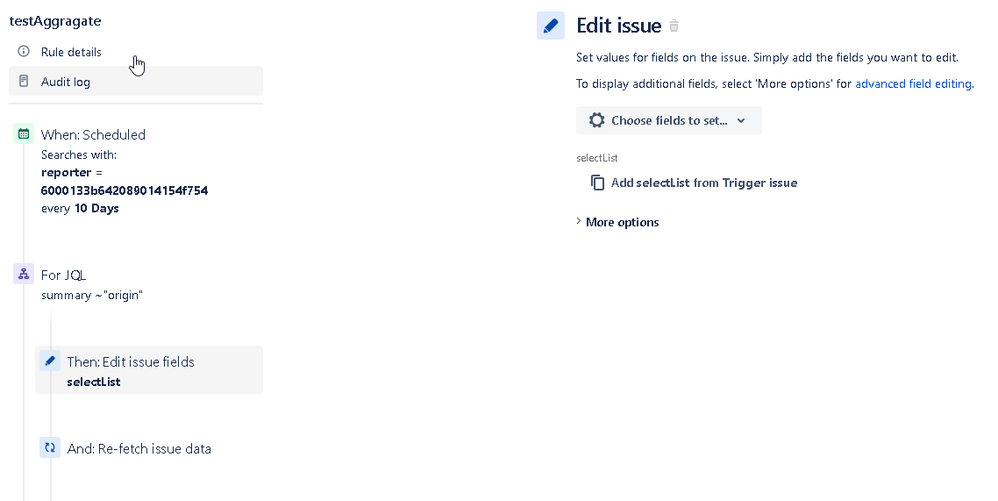 the issue where summary ~ "origin" should collect the value for selectlist from each issue in the scheduled query. i can only get to have an update from 1 issue and not all.

Thanks for the information, Ben!  I am still trying to wrap my head around what problem you are trying to solve, so I'll start with your posted rule.

Okay, back to your use case.  It appears you want to gather up some values from issues based on some conditions, and perhaps store that as comma-separated values (CSV) in a field in the trigger issue.  Correct? That is correct. The issues i gather from are in the scheduled query. The issue i aggregate to, is in the jql.

The issue also occurs with a simple text field. Lets call it 'country'. So the issue in the jql should contain all the countries from the issues that are under the scheduled query.

Lets say the scheduled query has issues A,B under it, and the jql references to issue C.

However, in the end, C's country contains only A or B.

Thanks for clarifying! And yes, that is what I would expect to happen...

Branch execution of more than one issue spins off separate processing for each issue, independent of the rule.  There is no guarantee of the order of processing or of when they will complete.  So a re-fetch inside a branch doesn't necessarily help.

Your "country" field sounds like it is a custom field.  So unfortunately you cannot use something like Lookup Issues to quickly solve this.  (Lookup Issues only returns a small subset of the issues fields currently.)

To keep your issue "C" updated, I think you have two options: