Automate based on country

I was wondering if I could build an automation rule that handles tickets coming from a specific region, country?

We have several customers that are located in different parts of the world. I have already an automation rule in place that ads the organisation based on the 'domain' BUT the problem here is that all countries have the same domain (eg. "xxx.com") hence I cannot differentiate based on that field.

What I want to accomplish is the following: 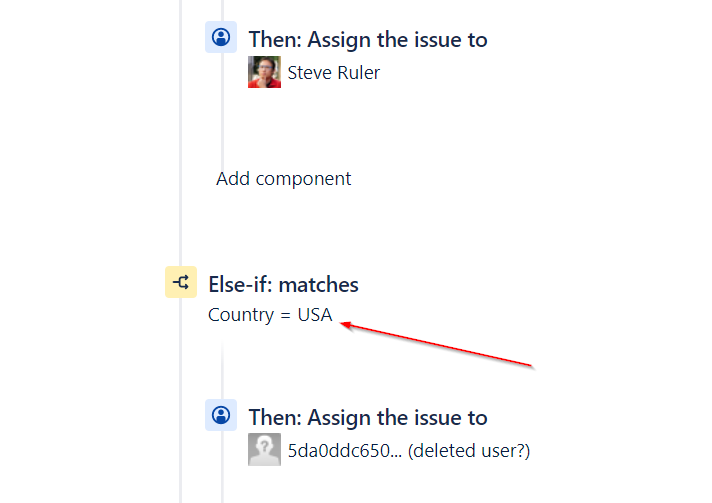 Thanks for the push in the right direction!

The first question is how are you storing the country in Jira?

If you want to automate something based on data, Jira has to have that data to work with.

How can we store the country would then be the most obvious question? Maybe based on the organization? The domain extension?

Thanks for guiding me in the proper direction.

Yes, now that's a good question, to which the answer is "what do you want to actually do with it?".  To that, "grouping issues together in a report or finding issues based on country" are the usual answer, but "use it in an automation", as you are is a very good answer.

I'd like to check that the country, wherever it comes from, is most useful to you as a field on an issue (that's how you're trying to use it in your Automation - "if the country stored on the current issue is X, do Y")

If that's right, then the simplest answer is "add a custom field to hold the country" - but that then begs the question of "where do we get it from?", which I think is the crux of your original question.

A simple custom field requires that the person entering the issue or request enters it themselves, which makes it easy to get duff data (number of times I've told people I'm in the USA or UAE instead of the UK... grr).  So it would be better if we could base it on something else.

For users, we might have access to some data about them, but I suspect this is limited on Cloud - the cleverest one I saw was a script that nipped into the LDAP directory, read a field off the reporter's account and put it into a scripted field - that meant the field was always right, even when the attribute (office, country, phone, whatever) changed.  But I don't think that can be done on Cloud.

You could do something like have a list of users (a people project with one issue per person) with their countries listed in a field, which you use in an Automation to copy to the issue, but that fields clumsy and you'd have to maintain it.

Thanks for your feedback Nick.

It's indeed a Service Desk thing that I want to accomplish like mentioned, so the idea to look at the organisation is probably the way to go...however here a problem occurred.