Fighting and learning at the same time. I want to set up an automation rule that when a customer updates comments on a JSM ticket, either by email or via the portal, the same comment gets added to the associated JIRA work ticket (assuming one exists).

It would also be fantastic if we could set this up the opposite way as well, so comments made to a JIRA work ticket that has an associated JSM ticket would update that as well.

Any suggestions would be gratefully accepted.

There are a couple of posts on this, do either of these options help?

You could look at setting up a custom link type between the JSM and Jira Work Management projects to limit the scope of the rule.

You can also do something quite cool in the workflows of either app called a "recursive transition" where the transition loops back into the same status, and this appears as an "Action" button on the Jira UI.  When you have this transition set up you could  add an automation rule to say when an issue transitions from STATUS to STATUS (following your recursive workflow) then create a new issue in Project X and copy the relevant fields across, and set the link type as (whatever your new link type is)

Thanks Mike - very similar - I actually found one five minutes before you post and after wrangling through the auditing process (damn! that's good) I managed to get it working. I'll post my solution below - I'm sure it will get refined as we go forward.

Cool glad you found a solution :)

I did wonder though, why would you want to have a duplicate issuetype in Jira Work Management?
Could you not achieve what you wanted by using collaborator "licenses"?

I used the recursive transition example when an organisation wanted to keep their JSM license count down and use a project in Jira Software for approvals from non-service desk agents (managers etc).  Is this the same sort of scenario you're in?

I don't think I explained myself clearly. All I wanted to do is to have any comments on a JSM issue be cloned into any linked issues in JIRA Software.  As shown below it works perfectly ,Appreciate your input.

I got this to work after realising that I had to "de-restrict it" to work across multiple projects. Thanks to @Mike Clarke  for the suggestions - this is what I currently have running. 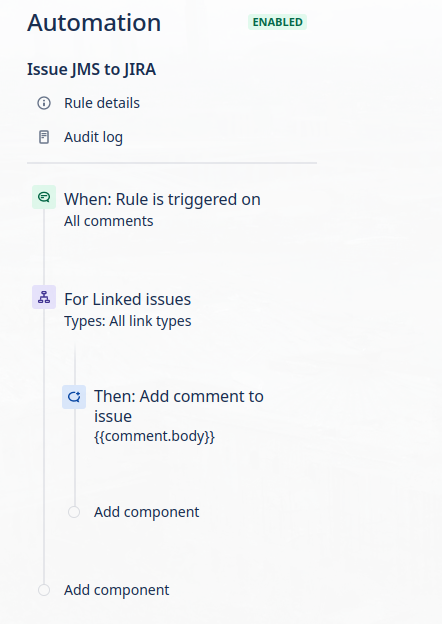