Why is my default priority not selected when I create an issue? (next-gen) Edited

The default priority I have selected is not the one that appears in the Priority field when I create an issue. Why is this?

Here is my list of priorities. "P2: Normal" is the selected default:

But when I click on the Create issue button, the Priority field is initially filled with "P1" instead:

In addition, any new issues I create inline in the Backlog view also take on the "P1" priority instead of the default "P2".

This problem is specific to a next-gen project. When I create issues in a classic project, the correct default priority is assigned.

With further testing, I have found that the default priority that appears in new issues is always whichever priority is in the second position in the list, no matter what I have set for the default.

Priorities set by the Issue Settings, are meant to be used only with CMP, rather than with TMP. To set a default priority on a TMP, try the following: 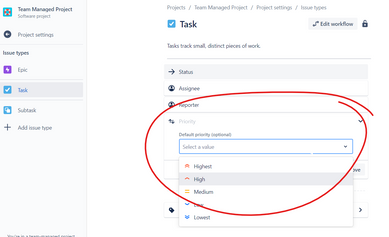 That is a good question. The default works fine for me. Do you have any addons.

The problem with the default is specific to my nextgen project. I also have some classic projects and those use the correct default.

I would go on the history of this ticket and see if priority's value changed after the ticket creation. If so, then this could be due to an automation of a post function on the workflow of the issue type. However, in case you don't see anything related in the history of this ticket, I would still search for an automation (project or global rule) as well as a PF on the workflow, since some changes could not be documented on the issue's history.

This is a Next-gen project. I don't have any workflows associated with it, not even a default one as is generated for classic projects.