Story points not appearing in sprint report for some issues

Let me describe the exact scenario below...

1. A sprint is created.
2. Stories are added to the sprint, all have non-zero story points.
3. Sprint started.
4. Added 3 stories during the sprint, again all have non-zero story points prior to addition.
5. All stories changed to different statuses. (Done or Resolved - both are green statuses)
6. Sprint closed.
7. Custom (Scriptrunner) script listener is triggered due to Sprint Closed event. This script does 3 things below.
a. Moved issues having Resolved statuses to the next sprint automatically.
b. Reopens the moved issues to To Do status.
c. Clears the story point value to zero for re-estimation in the next sprint.

After all, some issues have no story points according to the sprint report of the completed sprint. I'm wondering if there's a chance that Jira's report calculation begins asynchronously after the sprint is over and interferes with the scriptrunner listener. Could they possibly be working simultaneously and the scriptrunner's activities impact the report?

Below you can find some screenshots...

The first one is from sprint report. Issue is added after sprint start but has 5 story points already estimated before inclusion. However sprint report shows zero.

Second screenshot is from the history of that issue. You can see issue is added to the sprint and throughout the sprint, story point is unedited. After sprint is closed, scriptrunner's listener moves it to the next sprint, reopens it and clears story point value. (Last 3 changes) 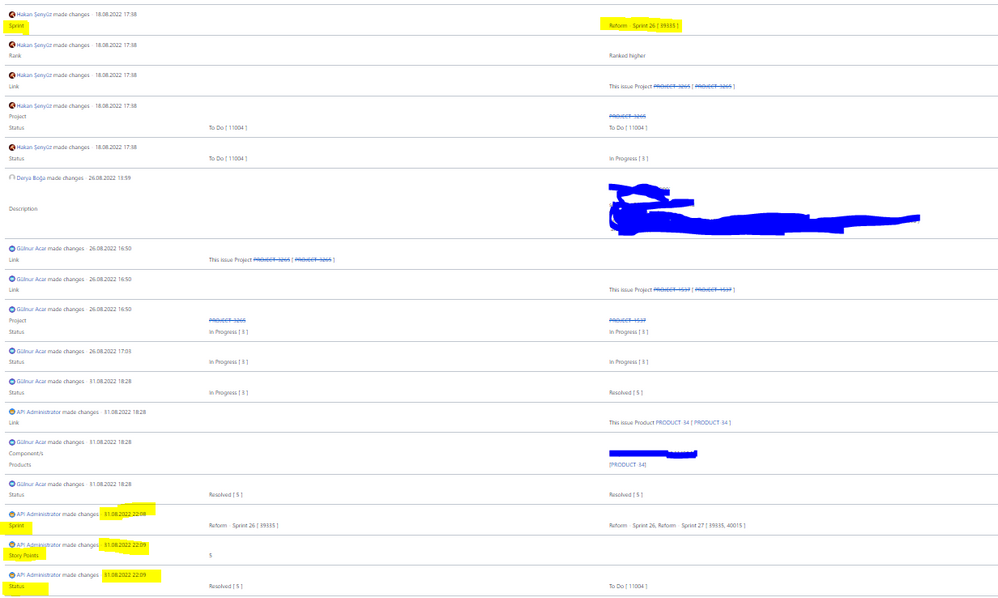 And below, you can find the sprint start and end dates.

The sprint report is reporting on the sprint, but you're botching the contents of it with your script, so it can't report accurately.

Why are you running a script that does the wrong things with your issues at the end of the sprint?  How is your process so broken that you think you want to do those things to your issues?

Thank you for your answer.
Yes, the sprint report provides information on the sprint, however I believe the script listener's activities are carried out after the sprint has ended. If so, I don't believe the sprint's content will change. Additionally, some story points—not all—of the issues appeared to be missing.

Yes, according to our procedure, it does not follow the advice of agile, but every business may have different needs.  It is a long story, but suits our needs.

Yes, it is partly your broken process that is breaking the reports.

You should stop using that script, delete it, and close the sprints properly (let not-done issues go into the next sprint, and stop editing the estimates on issues)  Your reports will start to work when you use the data correctly.

Our broken scenario is beacuse of how we run scrum.

Our teams creates stories but some stories can not be divided into more granularity to be finished within a sprint period. So, they estimate and write acceptance criteria only for the current sprint (like only development work should be finished etc.) and when they managed to fulfill it, they changed the status to resolved status, but it is not done yet, because it has more work to do like testing in the next sprint. You can advice us, not to change status to resolved if it is not completely finished. I am aware of it, but this is the way our agile office wants to happen for several purposes.

Thansk for your replies, I really appreciate it but I do not want to talk about our process, that's not why I asked this question. I want to know the internals of sprint report calculation.

You are not doing Scrum at all here, and it sounds like you aren't even vaguely Agile.  Your "agile office" is probably not agile at all.

Jira Software's Scrum boards support scrum, and the reports built off them need you to be entering data in the way Scrum does it.  Your sprint report does not work because you are not doing Scrum - you can't expect a scrum tool to arbitrarily support reporting and processes that are not scrum.

You will either need to move to doing something that fits in with scrum (if not Scrum itself), or you're going to need to admit that you're not doing Scrum, and write code for reports that work for your process.