I have created a number of issues for the project and assigned start and due dates for each task which are sitting in the "In Progress" category.

How can i assign a % complete against the progress to establish how much has been done or is there another means of establish extent of work complete whilst in progress.

Obviously, you will need to get people to enter data into Jira that you can use to report on a percentage, but the first question has to be "a percentage of what?"  Time elapsed?  Time spent working on it?  Number of sub-tasks done?  Movement through process steps?

You could just ask people to fill in a simple numeric field for a flat percentage (or, safer, a dropdown for say 0, 25, 50, 75), but that doesn't really tell you much because there's no actual measurement underneath it, your people are mostly just guessing, and worse,  it's a faff to have to remember to update it, so generally people won't bother - you'll end up with 0% for not started, 100% for done and mostly 0% for everything else unless you force them to enter something, at which point you can expect to see a lot of 50%s or random numbers that won't tell you anything more than "we're working on it"

Thanks for the revert. The intent was to look at % complete on an activity. ideally what i am looking for is physical % complete. Each task will clearly have an effort and time allocation to which we could be a 100% on the time but only achieved 50% of the work.

If there is no direct input area in Jira, its fine. New to Jira so had some expectations but will have to adopt other methods.

Thanks for the input.

"A physical % complete" is not any more descriptive than just "a %".  What are you measuring for completion?

If you're looking for a ready-to-use reporting solution for Jira Software, you can try the Analytics Plus app. It comes with several prebuilt reports like the one below that enables you to track the percentage completion of issues at a glance, and also gives you a forecast of issues that will be completed in the future. 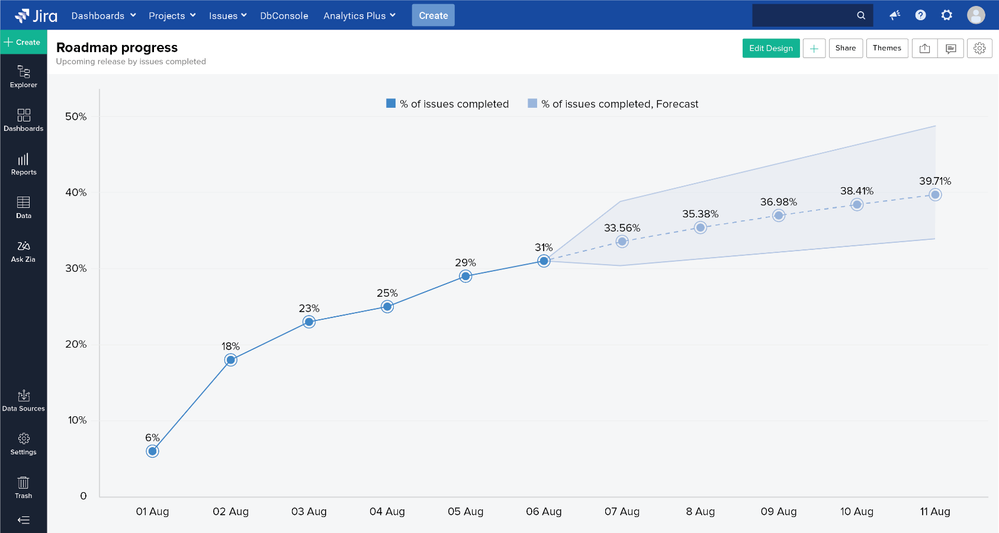 Using Analytics Plus, you can,

Disclaimer: I'm a product expert for Analytics Plus app.