How should we regain access to the Jira application without loss of data and downtime.

I understand you're having trouble getting Jira started after an upgrade from 7.7.x to 8.4.1 on Windows. I'd be happy to help you on the path to get the upgrade sorted out.

First, let's take a look at the Windows service. Re-running the installer is the easiest way to try and get the service re-installed; just be sure that the "Install Jira as a Service" box is checked as the installer completes.

If that doesn't seem to do the trick, we also have an article describing how to manually install the Service in Windows.

Next; the application not starting. It's possible that simply re-running the installer will solve whatever issue you're seeing at startup. But if it does not, it sounds as if there were modified files on your system ("Jira admin page reported server.xml file error.server.xml file edited"). The server.xml file is where you'd configure what ports/addresses Jira will listen on. The installer may not have merged changes from your old configuration successfully. You may need to modify this file to get Jira to listen on the address/port you're expecting to use it on.

One likely cause is that special arguments that are included in server.xml in later versions of Jira didn't get merged in to your file. We've got an article describing this problem here, and I've copied the resolution steps for your convenience:

Give those steps a try and let me know if that sorts everything out.

thank for the reply  I did opt to for reinstall and that put the service back and I was able to access the application as localhost.

new challenge is modifying the server.xml file to achieve external access. after the last change

This is the error I get now. 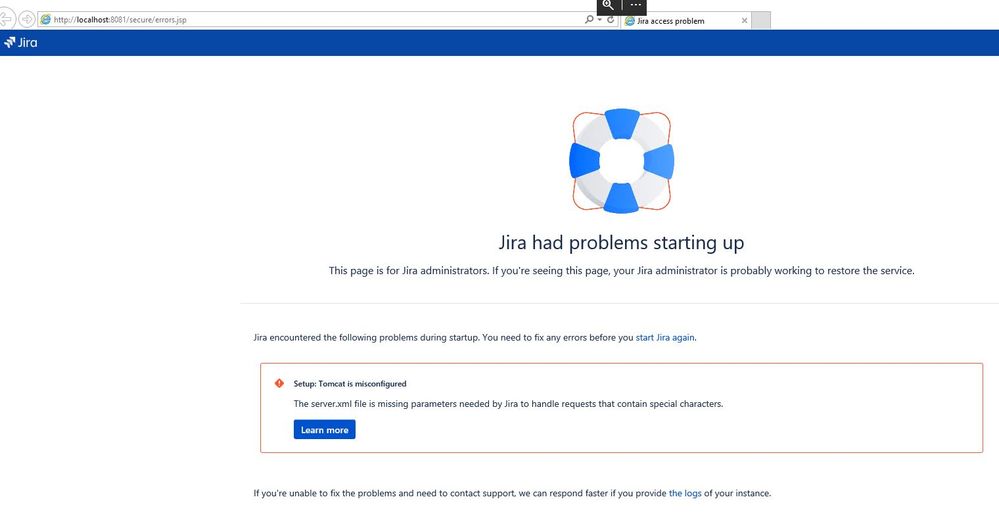 I'd recommend using a reverse proxy such as Apache or nginx in front of your Jira instance, and exposing the reverse proxy to the internet. This will give you some flexibility in the configuration of what you're serving externally. It's also easier to terminate SSL/TLS at a reverse proxy than at Jira's application server directly.

Given you're on Windows, I would recommend Apache (unless you have a lot of strong experience in either nginx or IIS). We've got a guide here that will help you through the particulars of configuring Jira with Apache. Or if you're ready to jump straight into HTTPS (I would actually recommend this for external access), we've got a separate guide for SSL/TLS configuration with Apache.