I have a requirement to filter the value of the Time log minus (-) original estimate or vice versa.

Please let me know if there are any alternatives to achieve this.

Note: We are hosted on Cloud instance and not using any Add-ons

Thank you in advance

There is a field called remainingEstimate that is set each time Time is logged. Does that fulfill your need?

Thanks for your response

I have an idea for you. Try using Jira Cloud's built-in automation feature to do the calculation and then filter over estimated and under estimated issues by the calculated result.

How to Do It

Create an automation to periodically subtract the original estimate from the time spent. Then either dump the response into a custom number field or flag the issue in some way. (Ex: add a label named "under-estimated" or "over-estimated") Then you can query/filter/report on the response, label, or whatever way you used to identify the issues you're looking for.

The smart tags (variables) you'll need to use are:

Here's the formula I used. Note: For math functions, prepend {{#=}} to open the calculation and append {{/}} to close it.

In this formula, I've converted both values to seconds, using "divide(3600)".

I created a simple (manual) automation, that just logs the result of the calculation, to test this idea. Here's what my super simple automation looks like:

And there's the result showing the number written to the log.

In the above screenshot, the difference between 4d and 5d is "8" meaning and excess of 8 hours over the estimate. If there was a surplus of 1d, the result would show as "-8".

If this isn't what you're looking for, I hope it leads you to a final solution!

This is what I'm exactly looking for, Can you help me with the configuration?

I want this to result in a custom field, How do I configure it can you please help?

Here's how I set up my automation. 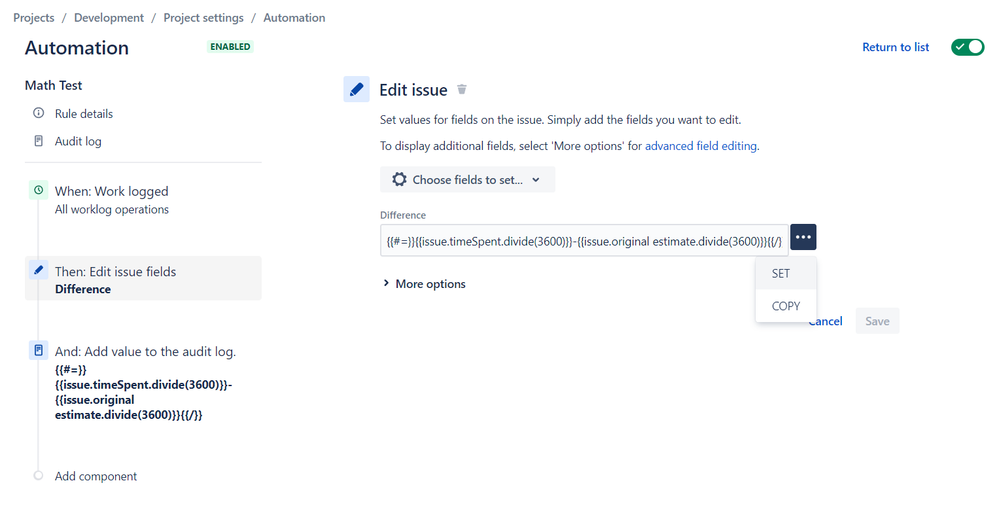 Additionally, I chose to post the calculated result to the log, just so I can check my math. The log action is is shown in the above screenshot and the result is shown in my Nov 29 message.