We're in the process of onboarding a huge new group of users from another system (Rally).

Due to the way their data was imported by a consultant, all of their projects were set up to use the simplified workflow, allowing them to create their own statuses. We do want to eventually clean things up and move to a managed workflow, but it's going to be a longer-term job. For now, they're struggling. All of our existing teams use boards "correctly", meaning 1) we use managed workflows that I've created, which include transition post-functions to set resolutions; and 2) we only have a single status that indicates an issue is truly done, and only that status is mapped to the final column of our boards. So I'm not super-familiar with what can and can't be done with the simplified workflows and boards.

I realize this isn't best practices, but is there any way to allow multiple statuses in the final column of a board to set resolution? Much of their imported data has various statuses that all equate to truly complete (Done, Not a Defect, Accepted, Completed), so they've mapped all of those statuses to the Done column in their board.

When I look at the board settings, I'm able to set the checkbox for all four statuses to set resolution, but when I leave the settings and come back, only the top one is still selected. This is causing issues when they attempt to complete their sprints, since even though the issues are in the final column of the board and show one of their "truly done" statuses, because they don't have a resolution Jira thinks they're incomplete and wants to move them to another sprint or the backlog. 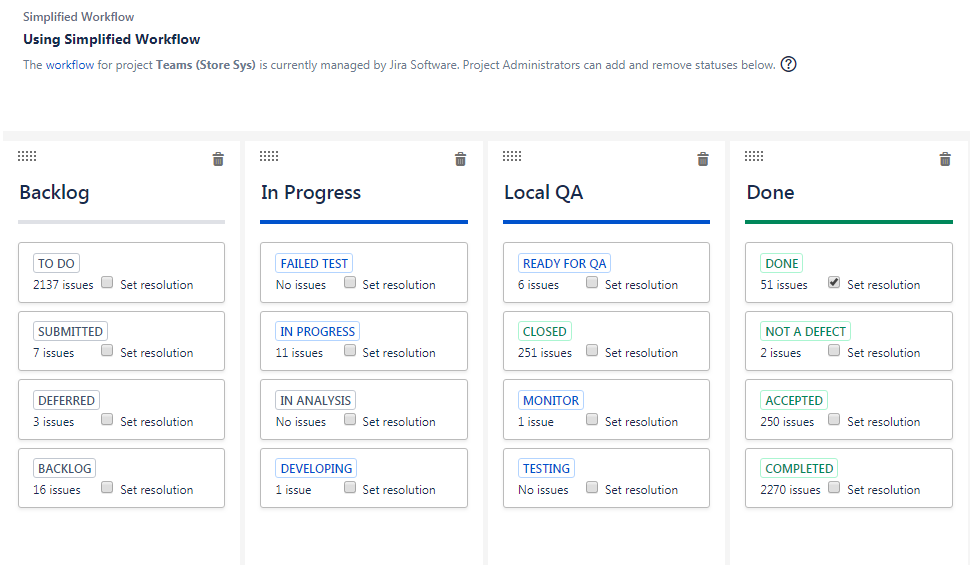 Sorry to hear you are facing this problem.

Indeed, the behavior you are facing where the "Set resolution" doesn't keep flagged once you refresh the page is a known bug with Jira Application. The mentioned bug happens only for the statuses that were not created by default in the workflow:

- Set Resolution unable to save

Feel free to vote and watch the bug to receive notifications about its fix implementation.

Although we understand this can be a little cumbersome, a valid workaround would be to:

2 - In the transition that leads to those statuses, add the post function "The Resolution of the issue will be set to ANY"

3 - Save your draft workflow

Let us know if you have any questions.

Thank you for your response, @Petter Gonçalves

We've never used the "simplified workflows" that are "managed by Jira" before. My understanding is that if I edit one of those workflows (outside of the board), it will become a managed workflow. Is this not correct? That is unacceptable at this point for this project.