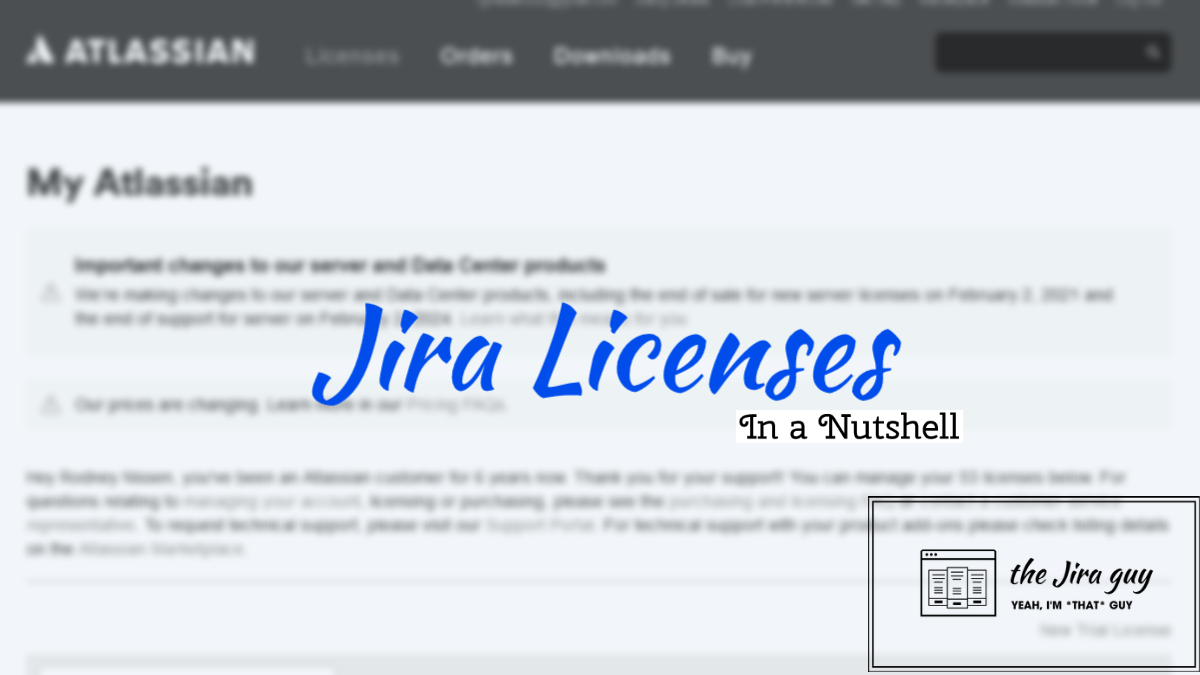 Honestly, I had just assumed that everyone knew that Jira Core was a part of Jira Software or Jira Service Management. I honestly had never considered otherwise. Then I came across I reminder I set for myself - that Tuesday (2/2/2021) was the end of new Server License sales by Atlassian. Of course, I posted about it and got a question about how App Licenses work in this regard.

Given there are obviously questions about this, we will go through Jira Licensing, how each license works, and what happens when each type expires. We will, of course, include Apps for each type of license, as well. So, let's dig into this.

So the first category we have is Server Licenses. This offering was Atlassian's first (and for the longest time only) License type. This type is also what is being phased out starting next week.

The Key to Server Licenses is that they are perpetual. That means once you pay, you don't have to pay Atlassian again to keep running your instance. "So...why keep paying Atlassian then?" you may ask. Well - the tricks are in the fine print.

Likewise, if your license is expired, and you experience any problem where you need Support, you are on your own. No, really - Atlassian will only offer Support for a currently licensed instance. This policy is because each Server renewal isn't a new license - it's just Support on the existing license.

The biggest downside to Jira Server is it can only run on a single instance. If you try to run another server against Jira Server's Database, Both servers will lock up until the offending server disconnects. Ask me how I know that one! 😉 So - if something happens to your only Server - goodbye uptime! Honestly, this is the biggest reason to consider Jira Cloud or Data Center. They are much more resilient than Jira Server can ever hope to be.

Another Downside is that Jira Server is often the last to get the cool features - if at all. Sometimes you can live without those features or get an App to supplement the functionality, but be aware that this will likely be the case until Atlassian sunsets Jira Server.

The first offering for Jira Server is their Jira Core package. This is a no-frills Jira - just the bare necessities to make a Business Project. No boards, no Portal - just the purified extracts. Honestly, this used to be all Jira was, and the elements that makeup Jira Software or JSM were purchased as Add-Ons. However, when Jira 7.0.0 was released, they changed how Jira Agile (Now Jira Software) and Jira Service Desk worked. If you don't need the extra features, this might be an excellent option to save some money. But if you have Jira Software or Jira Service Desk, no need to get this - as I'll explain in a moment.

As I noted, this offering was once called Jira Agile and was an add-on. However, Atlassian made a move to integrate it more tightly with Jira Core and rebrand it. If you have this offering, congratulations, you also have Jira Core Automatically as part of the Package - meaning you do not need to license Jira Core separately. However, this Package also gives you the ability to create projects that Support Kanban and Sprint boards - which are significant. Honestly, it's how I choose to organize my work even though I don't work in an Agile framework.

Like Jira Software, this is a package offering with includes Jira Core. The added feature for this Package is the ability to set up a "Portal" - or a website Customers can come and interact with your team. This offering is also different in that you pay for "Agents" - with other non-licensed users being free - so long as they interact through the Portal. This is geared towards ITSM Teams, but as with Jira Software, a creative Jira Admin can expand it for any team that needs to interact with and take requests from a larger population - such as Legal or HR.

This one was tricky, but Apps licensed to a Server instance appear to be perpetual - best I can tell. However, I cannot find any hard documentation stating that - only a couple of Community Posts are stating they are.

However, the same rules would apply - if your license expires, you can no longer upgrade your App's version, nor can you go to the vendor for Support. However, you can still use the App as-is.

Jira Server has a unique offering here - a Starter Tier. These are low-count offerings meant to either introduce Jira teams or give Admins a low-cost alternative to test functionality. For Jira Core or Software, you get ten users, and for JSM, you get 3 Agents. All for $10 USD each - and again, if you get Jira Software or JSM, you don't need to get Jira Core.

Most Apps also have a starter tier, and like Jira itself, most are $10 USD. However, this is not a hard rule, and I have seen some Starter Tier licenses for Apps be as much as ten times that cost - so do your research.

As stated at the start of this article, Atlassian is phasing out Server Licenses. Your last chance to buy a New Server License is Feb. 2, 2021. After that point, you will only be able to Renew or Upgrade your license. As I understand it, this is for both Jira and Apps.

Furthermore, Atlassian will be removing their Starter Tier on Feb. 2 as well, meaning any renewals that take place after that date will have to be the vastly more expensive 25 User license. I view this as a mistake and have stated as much to Atlassian - but I'm just one opinion on a sea of them. So get or renew them now!

The next "flavor" you can get Jira in is Data Center. The Largest added benefit of DC is that it gives you the option to run your instance in a cluster rather than a single server, which would dramatically increase availability and uptime. However, there are several additional features on Jira Data Center, including built-in SAML SSO, Zero Downtime Upgrades, a Custom Field Optimizer, and more. I suggest you look at the documentation for a full list - it's more than I can go over in this post.

If Jira DC is so great, why doesn't everyone move there - especially now that we can run DC in a single server configuration? Well, there are gotchas. The first one is Price. Data Center is generally more expensive than Jira Server licenses, especially after considering that the lowest tier Jira DC license you can get is for 500 users.

Then there are Apps. Not every Server App can run in Data Center - and there are even a few that will break your DC instance if you try to run it. So, you might have to find a new App for functionality you need - and that's assuming it's even available.

But the biggest Gotcha is the fact that a DC license is an annual subscription.

Yes. Unlike Server's perpetual license, if you don't pay your Data Center license every year, you don't get to use Jira. Everyone here knows I'm as Pro-Atlassian as anyone can be, but this still rubs me the wrong way. But here we are all the same.

Unlike Server, there is no DC Version of Jira Core. So if you need just this, I'm sorry, you're going to have to choose to get Jira Software or Jira Service Management. I'd lean towards Jira Software, but I suppose that decision would be influenced by what features your teams can use.

Nothing really to add here that I didn't say above. These are more or less the same offering on Server - just on a Subscription license. Most of the features you get with Data Center are attached to Jira Core, meaning you get them no matter which of these two you get.

Apps here work just like the DC licenses - they are subscriptions. Meaning if you choose not to renew a License, you lose that functionality.

The last offering I'll speak of is Jira Cloud. Honestly, I only have moderate experience with their Cloud Products, though I plan to dig more into it this year as I prepare to take the ACP-120. As Atlassian is also pushing Cloud, you can generally find that Cloud is cheaper than Data Center for most user-tiers. There is a break-point where DC is cheaper to run than Cloud - but that's at a vastly larger tier.

Cloud runs on Atlassian's platform, outside your network. This fact means you don't need to mess with setting up a system to run Jira and that you can set up a new instance in mere minutes and have it ready for users almost immediately. That can be an extremely attractive proposition - especially compared to Jira Server and Data Center. My record time to stand up a new Jira Server instance from scratch is about an hour - so Jira Cloud has me beat.

And because it is hosted on the open internet, integrations with Jira Cloud are MUCH easier. No mucking about with firewalls or convincing the Network Team to make some change. It's just there, ready to go.

However, there is a trade-off. Jira Cloud is a monthly subscription - usually per active user, so you need to know that the bill is coming. Atlassian does offer a reduced-feature Free tier for Jira Cloud, that they are touting as their replacement to Starter Licenses. I feel it doesn't help you learn the back-end of Jira, but if all you need to learn is the front end (which is most Jira Admins), it's definitely an alternative.

I can easily see how you would get that idea. But, no - I don't hate Jira Cloud or Data Center. In the right circumstance, these offerings are a perfect fit for some organizations!

But I am NOT a fan of Server's End-of-Life Announcement. The way I see it, there are teams out there that don't fit cleanly in either Jira Cloud or Data Center. They may be a small team, so something as large (and expensive) as Data Center doesn't make sense. But they need to have their data locally, so Jira Cloud doesn't make sense. Jira Server would have been this team's natural home, but that's going away. So, where does this team go now? That is still an open question in my mind.

That being said, I want you to have all the knowledge: The Good, the Bad, and the Ugly. If you are on Jira Server, you've got some work, decisions, and conversations ahead of you.

And that's it for this week!

If you are interested in seeing more from me, I post these articles a week earlier at https://thejiraguy.com. Otherwise, I'll see you right here next week! And until next time, Have you updated your Jira issues today?

Good summary. Eventually all on-prem plugins (apps) will need to be Data Center approved (and priced) or become dead ends

nice article and does a good job at summarizing the product comparisons and pros/cons.