during build stage we just needed done as last status in the workflow. Now in run we want to use a new final status after done called deploy prod.

It was no problem changing all the previous issues marked done to deploy prod with bulk operation.

Can anyone help please?

Sorry to hear you are facing a problem. I understand that you have recently changed your done status to a different one (deploy prod) and bulk updated it in all of your issues, however, the Sprints closed before that change are displaying in done status and returning as not resolved in the Sprint Reports. Is it correct?

But if you open the issue navigator all these issues have the status deploy prod and the resolution done. It seems that the change hasn't been synchronized with the reports.

The Sprint report will always consider the status that the issue was added to when the Sprint was closed, not mattering which status you added posteriorly to the issue. This is an expected behavior to track what issues needed more than one sprint to be completed and properly identify in which Sprint it was completed.

In the Sprint report documentation, you can see the following sentence:

That being said, the issue will only appear as Resolved in the Sprint that it was transitioned to the last status in the board columns. Can you check if this is the case?

Also, Could you please provide us more details on how you changed the bulk operation and how the previously done issues (Issues moved from done to deploy prod) are appearing in the Sprint report?

thanks for reaching out.

It's about issues that had as last status done when the sprint was closed. In the sprint report they still are labeled done but appear as not completed instead of completed and are mixed up with those issues really not completed.

The bulk operation: project -> issues and filters -> done issues -> advanced search -> in this view over the 3dot menu I chose bulk change all XX issues.

If you open one of these issues or open the issue navigator from the reports all of them really have the status deploy prod what makes me believe the bulk operation worked.

The board and its columns are also configured correctly I think as you can see on the screenshot: 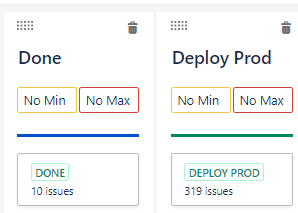 Could it be that there is a problem with the bulk opartion and the reports? I did the same last year with a way smaller project with the only difference that I changed the status manually. This projects reports look fine.

I hope these details can help.

Thanks and kind regards

Thank very much for your screenshot and details provided.

Now, I was able to exactly identify where your problem is happening:

You still have the Done status in your board column, however, it is not configured as the final status of your board.

An issue is considered to be 'To Do' when it is in a status that has been mapped to the left-most column of your board. As you can see in the column color, the Done column is set with the blue color, meaning the status category is In progress instead of Done: 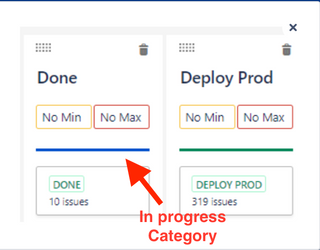 Unfortunately, it's not possible to have multiple Done columns in a single board, as mentioned in this feature request.

That being said, I recommend you to map the DONE status together with the DEPLOY PROD in the Deploy Prod column and create a different status (Maybe RESOLVED) in order to fix the problem.

Let me know if this option makes sense.

thanks for your respond and sorry for my late one. I still think the problem lies somewhere else. In our workflow Deploy Prod is the last status instead of Done. 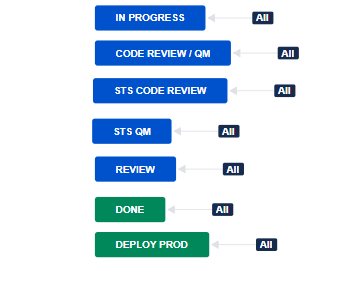 Can you recunstruct the problem?

I did some tests doing the same steps you described to me and I was able to reproduce the problem but under other circumstances.

Basically, I believe that the old "done" issues are not being displayed as complete in your report by the following reasons:

1 - When the Sprint was closed, the last status of your board was "Done" and not "Deploy Prod"

2 - When you added "Deploy Prod" as the last status of the board and bulk changed the status, the Done status was moved from the last column, causing your issues of the previous sprint to be considered "not Done" at the time that you closed the Sprint

Performing both steps above, I was able to reproduce your problem. Of course, the problem only reproduces in the issues of the Sprint that was closed with the "Done" status in the last column.

All the issues that were moved to "Deploy prod" after that sprint appeared just fine in the report, no matter if I change the status manually or by Bulk operation from done to "Deploy Prod" (I tested both).

Can you check if this is not the behavior you are facing?

thanks a lot for reproducing it. I did it as well and you are right: It's not about the bulk operation, it's because a closed sprint and its report aren't effected by the status change.

Do you have any idea for a workaround? I mean you can see in the report which tasks are done. These are the ones completed in the sprint of course. But there is no way to filter it in the report view, right? And if you switch to view in issue navigator the new status is already set :)

Thanks so much for all your support so far.

Thank you for confirming.

This is the workaround I was able to achieve with your scenario:

1 - I added a new status in the workflow (Resolved) and mapped it in the Done column of the board, together with the "Done" status

P.S: If you would like to keep the Done status as the status previous to the "Deploy Prod", you can simply rename the Resolved state to Done, And done to something else once you perform the steps.

Let me know if these steps make sense to you.

awesome, your workaround works totally fine! Thanks a lot for the great support!

I only have to think about if I really want to change names of status because they are settled on system level. So I can destroy other projects if I change status e.g. renaming done to deploy prod and deleting the former deploy prod. And I need new status names every time we move from build to run.

But that's not your problem, I will think about it ;)

Have a lovely day

You are welcome, Yvonne.

I'm glad to know I was able to help. Have a nice day!