I setup two plans, A and B. Plan B with scenario enabled.

Both plan have say three issues, Issue a, b and c

The rank order of my issues in plan A are:

However, the same issues on my plan B are:

Is it all plans should share the same ranking as it is global?

Also I tried to switch the ranking on plan B to the same as plan A but after I commit/update, nothing actually change.

And I also tried to perform a search with above issues in Jira sort by ranking. My plan A matches with the ranking in Jira as well.

So i'm really not sure why plan B behave so differently.

Predominantly I would recommend against having two plans looking at the same issues, as the two plans will be attempting to change the same content and is a duplication of effort.  Rather than using two matching plans use multiple scenarios on one plan to do data comparisons then commit the scenario that you want to follow.

However I attempted to replicate this behavior you are seeing and cannot get the ranks to become miss-aligned unless there are uncommitted changes to the rank values on one of the plans which would be expected as the Plan is holding onto the rank data change in the uncommitted order to be added back on commit of that rank value data change. Basically two different rank value changes that directly oppose each other.

As an exe the only way I can get a discrepancy between the two plans ranks is if there are Uncommitted changes on Plan B after committing changes to Plan A like this: 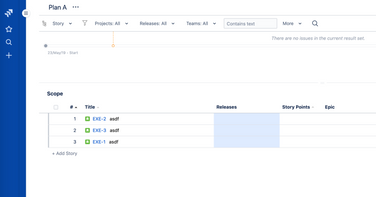 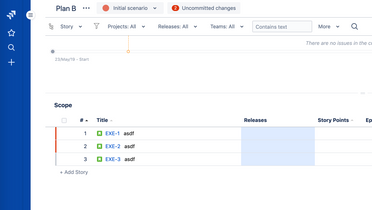 If I commit Plan B, Plan A will show the re-rank to match and if I discard changes on Plan B it will also line up the rank with Plan A.

Thanks you for your help. The reason why I have two Plan is because Plan A is a test which we no longer use. We are only using Plan B currently. I only use Plan A as reference after I notice that Plan B is not showing the rank correctly.

I don't have any uncommitted changed. Like I mentioned, I did try to change the rank by moving my issue a on top then commit but it will always move back to its original position. What is even weirder is that when I check history of change on that issue (after commit), rather than saying issue ranked up, it actually said issue ranked lower as if I move rank down somehow.

This is odd, I would say as a next step let's check the rank fields integrity to see if there is anything going on with the rank field itself that could be causing an issue in the issue re-rank.

Navigate to the Lexorank Management Console and run the Integrity check.  Let me know if any of the values come back with a "Failed" message, and Grab a screenshot of the "Database status" section  that shows the Rank field distribution.