How to reorder a subtask card in a column on the board ?

There is a JIRA issue in the backlog. A subtask of that issue is in progress status on the board in a column.

The subtask is at the end of many cards in the column.

The subtask couldn't be dragged and dropped in a different location in the same column.

When the card is dragged and dropped somewhere above , the card doesn't move to the new location.

Can the subtask card be reordered ? How ?

The problem is not for just this subtask. It is the same for all subtasks on the board.

The answer is unfortunately no.

The subtask displayed in the board should have a small header above it that identifies its parent issue, like this - SDP-1225 is the parent and SDP-1912 is the subtask

Since the parent issue is in the backlog , Will its rank be always lower than the issues that are already on the board ?

I'm not an expert, but I think the answer is no. Rank is a relative position compared to other issues regardless of status.

If you have issue ranked thus in your backlog:

... then ranking records that Issue-3 has Issue-4 below it and Issue-2 in above it. When the issues change status that rank information remains the same unless you change the issue's rank after changing its status. I don't think I can explain relative ranking adequately or provide a good example that would explain it clearly, but I'll try.

If Issue-3 is changed to In Progress and there are no other issues In Progress, then it will appear to be the highest ranked issue In Progress. But if you then change Issue-2 to In Progress, the relative ranking will automatically put it higher than Issue-3, because that is how the issues were ranked overall.

If you then changed the ranking of those two issues so that Issue-3 was higher than Issue-2, I believe all the affected issues get re-ranked. So then regardless of the status the overall ranking becomes

As you move the issues between statuses, the overall ranking is maintained and that determines their ranking within a given status.

Do you know a way to change the rank of issues when some of them are in backlog and some are on the board ?

You might use a separate kanban board based on the same filter, but without a backlog screen and with all not-Done statuses mapped to one column.

That would put all your issues into one column where you could re-rank them, and those changes should be reflected in the ranking of issues in your primary board.

For me, I when I hover over RON-546 number/title the mouse cursor does not change to a cross-hair cursor and is not drag-able. I can't see a Rank field (number?) to edit it manually to rank it in relation to RON-510 & RON-372.

I can successfully drag & drop a Bug issue with subtasks but not a Story issue. 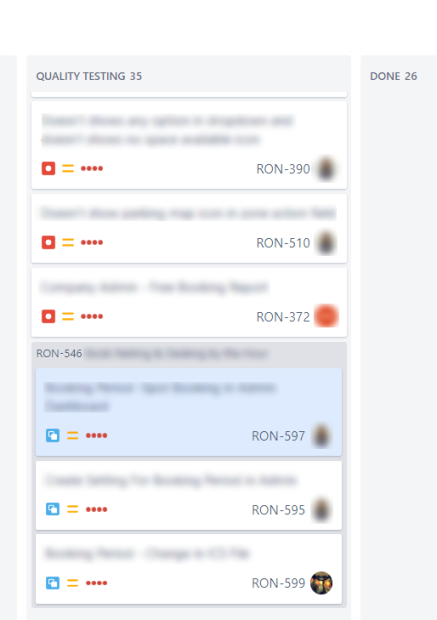 If it is not appropriate to change the parent issue's Status to match the column, then you would need to consider the option I suggested in the final comment I made on this thread previously - use a separate board where there is no Backlog screen and all statuses are mapped to one column.

That's exactly what was happening, I am now able to order the items correctly.