My task is in the "Stuck" status and cannot be started (transferred to the "To Do" status) until all tasks blocking my task (which are indicated in the "Linked issues / is blocked by..." lines in my task) are completed ... After all blocking tasks are completed (they will be transferred to the "Done" status), it is necessary for the status of my task to be changed from "Stuck" to "To Do"

How do I set up this automation correctly?

May be you need Automation for Jira Plugin.

We previously done based on Epic Status based on Linked Stories statuses.

1. If all stories are closed  then Epic must close

I'm not sure about , issues linked using "Links".

1. Our Jira (cloud) subscription includes all automation features. I don't think I need to buy anything else...

2. It seems to me that your answer is about a slightly different situation - tasks in one Epic, and not tasks linked by a link "is blocked by.."

I'm pretty certain this can be done through automation.  Having looked briefly, I think the below (amended for your own status names) would fit what you need: 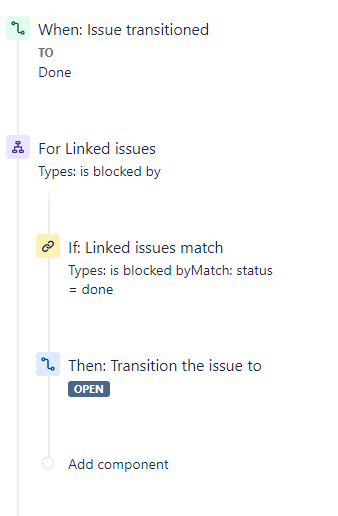 Maybe I poorly explained my problem ... Once again:
My task is in a "Stuck" status because several other tasks that are linked to my task and are blocking it have not completed.
When all of these linked tasks have been completed (their status will change to "Done"), the status of my task should automatically change to "To Do".

Explain to me, please, in your automation to which of the tasks (to the main task or to the blocking tasks) does each step refer to?

You can see this nicely as the entry point is the trigger "When: Issue transitioned TO Done". If this "event occurs" then Automation will act upon the linked issue.
Cosmetic thing in the screenshot: The transition is intended to change to "To Do". "Open", as shown, is also common but not your status name actually - like I said, minor but probably the source for irritation.

You could test if it works.
I have seen scenarios where it was enough that one issue which were blocking "the issue in stuck status" came to done whereas it is required that all issues would have come to done.
I cannot see this from the rule itself - therefore a test would be a good idea.