I have a problem with cloning an issue from the type Test Execution through the Jira Automation. The original Test Execution issue that is cloned has already the required tests inside. By cloning that issue manually the tests are copied as described in the documentation of XRAY:

Test Environment associations will be cloned as well.

However, when I set a rule to clone that original Test Execution issue it doesn't include the Test issue associations. The rule is triggered by a version created and a set of issues are automatically created. One of them should be the cloned Test Execution issue. I set a condition first to branch rule/related issues and set the issue key equal to the original one followed by a clone action.

It is important to figure out what I'm doing wrong as adding manually tests is really time-consuming. Maybe I'm doing something wrong with setting the rule. Please let me know if you have any ideas as to how to solve this problem.

Jane from the automation team here. Are you able to please send a screenshot across of your rule so I can have a better look for you? It sounds like you're doing the right things, but without the configuration of your rule, it's hard to tell if there is a misstep somewhere.

thanks very much for getting back to me. Here's a screenshot of the rule. 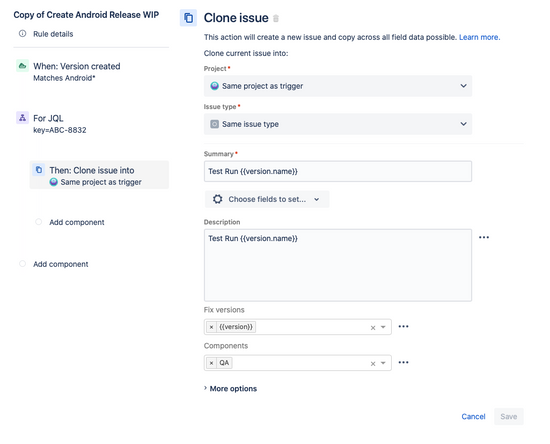 Thanks for that Evanthia!

It looks like we will need further investigations into this. Are you able to raise a support issue at support.atlassian.com with:

They may also ask you for further details, depending if they were able to suss out what's going on.

Sorry I couldn't be of much help! I'm hoping we can get to the bottom of this for you via support.

I asked my Jira administrator to reach out to support for further investigation. I really appreciate your help!

Did you get closer to a solution?

unfortunately it was not possible to clone a ticket with the tests through the automation. So the ticket would always be cloned empty. We just continued cloning manually. Hopefully, this will be enabled in the future.

Thank you for your quick response.

After my comment here, yesterday I found this ticket: https://jira.getxray.app/browse/XRAYCLOUD-3165

I don't know you found it too or not but maybe it worth a vote from you as well :)