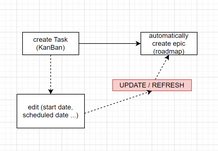 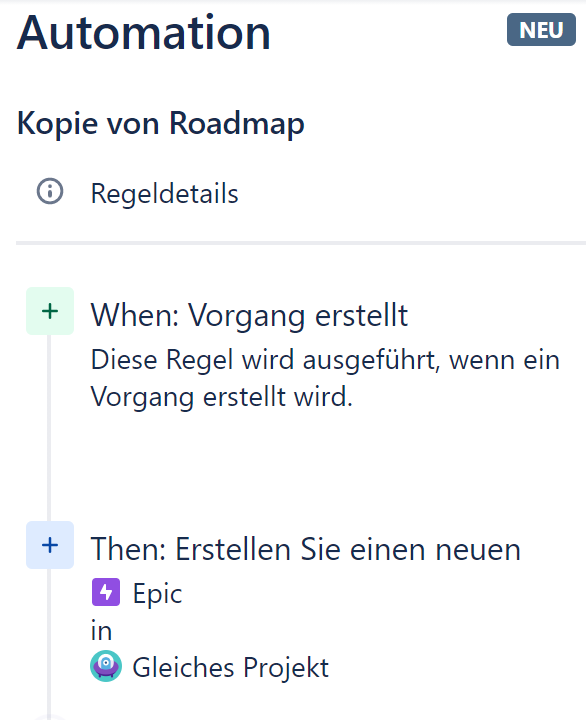 I would like to get my roadmap automated. I have already created a rule that creates an epic from a task. Unfortunately, the details are not provided.

Since I need to add the details AFTER creating a task (meanwhile the epic was already created), the details are not mentioned in the epic. Therefore, I can't see the start and end date, for example, and I have to manage this action manually. I have tried many options but to no avail. If someone could help, that would be great.

I am unclear what you are asking...perhaps you could answer some follow-up questions to help the community give you suggestions.

Hi Bill, thanks for the warm welcome.

the Epics should be created automatically from the tasks.
At the moment, as described above, I have created a workflow that creates an Epic from a Task and thus transfers it to the Roadmap. However, the core data is then missing in the Epic, as this is generated immediately when the task is created.
Thus, I have to enter the data manually.

current workflow:
Step 1: I create a task
Step 2: the task generates an Epic by a rule - WITHOUT the core data (see second screenshot).

Intentional workflow:
Step 1: I create a task
Step 2: the task generates an Epic by a rule (WITH all contents from the task, like start and end date, owner etc.).

I already tried to work with updating the tasks and also tried to generate other rules.

I would like to respond directly to your points once again

I hope I made myself a little bit more clear :D

Thanks for that information.  You describe using an automation rule to detect the task creation, and the task contains the data you need to set the epic dates, so you could set those dates when the epic is created by the rule.  Have you tried this yet?

Also I wonder: you note keeping the task and epic dates in synch after they are created, implying there is a 1-1 relationship between tasks and epics.  If that is accurate, why not just use epics and ignore the tasks?

JSM June ask me anything (AMA)

Hello Community members! We’re wrapping up the end of JSM June with an Ask Me Anything (AMA) with the Jira Service Management product team. This is your chance to ask all your ITSM questions to o...