The same status appears multiple times on a dashboard I'm trying to rationalise and reduce the number of statuses used across our projects.  To first get a handle on how many issues were associated with each of the different statuses I created a filter showing everything and used that in a dashboard inside the Issue Statistics gadget. 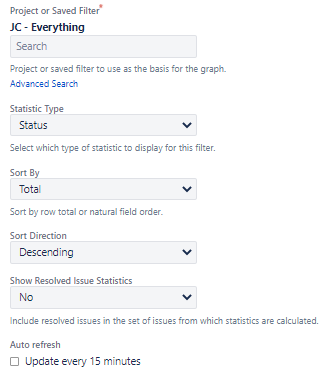 What is  strange is that whilst I only have a single 'To Do' status, on the dashboard I have a total of twelve rows for 'To Do'.  For example:

There don't appear to be any other duplicates in the list.

This can happen when you've been creating projects that are independent of each other, not sharing workflows, but that will create multiple status, and you say you haven't got duplicates.

I'd still want to check that (and you'll be doing the next debug step in the same place anyway) - go to Admin -> Issues -> Status and check the list.  If there really is only one "to do" status there, try nipping into edit it and change the name.  Something simple like changing it from "to do" to "to-do" or "to do.".   Go back to the dashboard and see what names have changed there.

Next, staying with the gadget, I'd want to compare two of them.  Taking the pair of to-dos near the bottom of the list, one is saying 6 issues and the other 5, open both numbers in a new tab or window and compare the list of results.  Does the 6 include the 5?  If so, then what's different about the missing issue?  Or are the lists totally different (e.g. different projects)

I have checked, repeatedly for my own sanity, and there really is only one 'To Do'.  What is strange is if I select any of the issue counts to the right of 'To Do' in the gadget I'm presented with a filter

The results of that makes some sense, actually answers the next question I was going to ask, and rules out a load of problems we could have waste time chasing down.

But it also confirms that you've run into a massive bug in Jira's team-managed (next-gen) project implementation.  One of many that contributes to my instinct to disable them in every Cloud system, or at least educate people that they're not really ready for use yet.

There's a technical essay on how team and company managed projects do workflow and status, but for this question, it can be summarised as "each team-managed project creates a status marker that looks like a separate status to the filter statistics gadget, despite the name"

So, I can't say where the bug is.  It is either that team-managed projects create isolated status with the same name, or that the filter statistics gadget looks only at the unique id of a status, rather than the name.

Either way, the bug is that the gadget can't handle team-managed project status properly.  Your filter is working properly, finding all 261 to-do, but the gadget does not understand the to-dos in the next-gen projects.

I do not know if there is a work-around or fix, other than giving your team-managed project status different names.

You're 100% right Nic.  I can tie back the individual rows: one for every Team project with the exact same number of To Do issues plus one with the sum of the To Do's across all Company projects.

Will Atlassian pick up the existence of this bug from this forum or do I need to raise it elsewhere?

Thanks for your support.

Hi John, it's a fair thought but why:

i) Would the filter content presented by the dashboard be different to a 'raw' filter? In the filter view there is only one To Do;

ii) Only the To Do status has multiple rows on the dashboard.  If it were an issue due to the different behaviours of Team and Company projects then wouldn't all 'shared' statuses be duplicated, potentially multiple times?

I don't know why the Dashboard is different than a regular filter query but I suspect that only the single shared status value of To Do shows up there - unless you include the project value of the Team-managed project.