Time to first reply/resolution time not being set

I'm monitoring first reply time/time to resolution SLA, but I have an issue where the times aren't being set on many tickets and thus the SLA Breached true/false flag is also not being set.

The Times are set on some tickets and this is correctly causing the SLA Breached flag to be set to true or false, but I can't see why there are so many with blank entries even for tickets that have a resolution and have been completed.

The Jira built in report that shows breached/vs met number is very very low because it's missing the tickets with 'blank' entries.

I've confirmed this by using PowerBi to do my own reports and I can see in the raw data that a high proportion of tickets that are resolved simply do not have any times set against them and have a blank SLA Breached field.

This means that resolved tickets are in a state of neither breached or not breached.

Does anyone know what could possibly cause this?

What trigger populates the first reply/resolution fields because that doesn't seem to be happening. 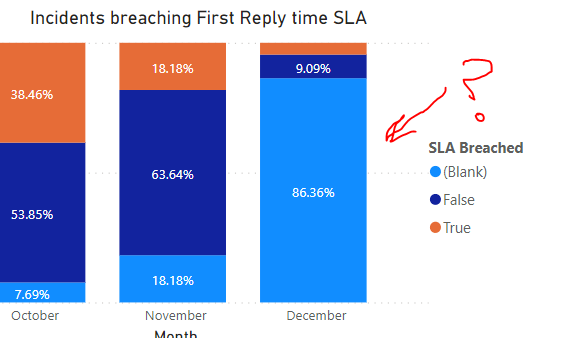 Hi @paul_creedy please share the goals and metrics of your SLA.

When does it start, pause, stop?

You may be onto something there because my SLA's are based of ticket priority and whether it's a service request or incident.  I don't have SLA's on low priority tickets, just medium, high, highest ones.

Looking at the raw data the tickets that don't have SLA fields set are ones with low and lowest priority.

So this seems to be the issue, there reason so many are blank is because there is no SLA trigger set for those ones due to the priority level of the ticket.  There is a catch all SLA but as there is no target time set against it, it will never trigger.