We have GitHub organization integrated with Jira via the GitHub for Jira app but I am not seeing github as a Git provider when attempting to create rules around PR created/merged etc. Has anyone else run into this issue and have some advice for us? @Donald Green The rules are Git provider agnostic and are triggered by Git events from the linked repository when a Jira issue is mentioned in the Commit or PR comments. Let us know how you go with it.

@Shilpa Airi Ah okay I see now. Thank you for that clarification and for responding so quickly ;D. After mentioning a ticket using smart commits I can see the Automation rules now allow me to setup triggers based on repo activity. I will definitely be experimenting with this to help improve our flow ;D. Thanks again!

At this stage, there are no plans to add these triggers to Data Centre / Server.

Where can I get a list of smart values for this activation?

Please refer to https://support.atlassian.com/jira-software-cloud/docs/smart-values-development/ for smart values you can use with these new triggers.

Regarding the smart values, I'm missing the possibility to determine which user created the branch. In my rule I can transition the issue on branch creation, but I haven't found a way to determine the user that did it, so I can assign the ticket to them.

I have tried "User that triggered the rule" but this doesn't do anything. And if I activate the board rule to assign the ticket to the current user when moving to a certain state (column), then it assigns to Automation for Jira, so I had to deactivate this simple feature and replace it with an Automation rule that excludes Automation for Jira from the assignment list.

There was a discussion about this use case but we have not made a decision yet. There is no easy way to securely map the user identifying information tied to DevOps events to a Jira user. All of this information can be faked so we have to approach this carefully. Of course one solution may be to pass on the raw author username and email as smart values but maybe we can do better than this.

I'll pass on your feedback to the team for further consideration.

For anyone using GitLab who wants to learn more about how these new DevOps automation triggers work, we are running a co-hosted webinar with GitLab in a few weeks. Register here if keen: https://www.atlassian.com/webinars/software/automate-across-gitlab-and-jira

Note: it will be equally valuable if you use BitBucket, Github as the use cases are pretty much the same :) really nice feature, thanks a lot.
We often have the scenario, that someone creates a pull request in bitbucket and adds a reviewer from our team to this pull request.

Is there a way to use the pull request created trigger and automatically assign the corresponding JIRA issue to this reviewer?

Unfortunately I did not find the reviewer as a smart value in the list.
Has someone an idea to solve that?

Thanks and best regards
Ole

Good news! You now have double the amount of DevOps automation triggers available to you.

We have just shipped support for Build and Deploy triggers so you link up tools like Jenkins, Circle CI and more. Read more about it here:

More good news - we have added an extensive list of smart values that will work nicely with all of these DevOps triggers. You can find them here.

Glad you are enjoying these new triggers!

Unfortunately, at the moment, we don't support any user-based smart values but your use case makes full sense to me. It is also not the first time I have seen this request since we shipped. I have created an improvement request in our backlog so we can hopefully add this support down the line :)

@John McKiernanAny reason why these aren't on the server roadmap?  I'm seeing more and more lack of support for server and its really frustrating because I bet there are alot of us who cannot use cloud solutions but fully support the tools.  Could solutions are just not possible for the work many large companies do.

I hear you. The Server team has a list of priorities they are working through but I don't believe this is on the list at the moment. I can update this post if there is any change. Sorry I know that's not the answer you are looking for!

Thanks for great new features. Have tried it with  "Pull request created" trigger, and it looks like to be working with "master" branch, although we use "dev", in which we merge all the ticket branches. And it doesn't seem to be informing me about pull requests for other branches than "master". Maybe it is configuration thing?

Very sad that this feature (among many others) is not available for Jira Server - 2.000 users missing out on it on my end.

I agree with you, @Braden It is indeed frustrating. Many enterprises are legally bound to on premise solutions because of customer regulations. I hope Atlassian doesn't expect us to move into the cloud, because we simply can't.

Hi this looks like a great feature, thanks. I want to implement the following flow:

Maybe dumb question, but this will only affect linked issues correct? 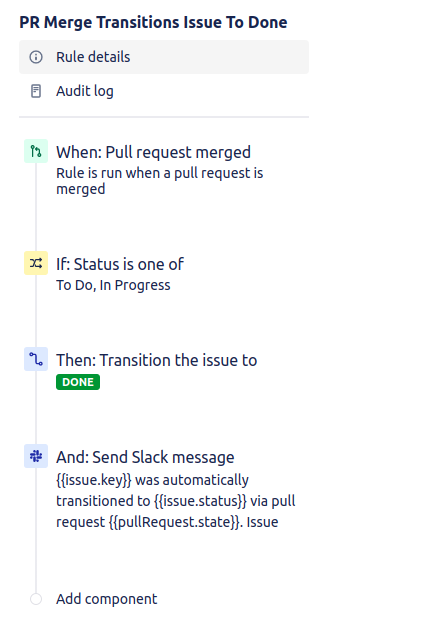 Glad you are enjoying these new features! Not a dumb question at all. In fact, I had to check it with one of the engineers!

So as you have your rule set up now, this will run for each associated issue. If you want to get more granular you can use the branch / related issues block 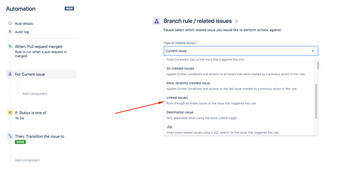 I'm looking at hooking Jira to GitHub. What is Atlassians position on best practice for doing this?

Is it via Automation for Jira or GitHub for Jira (https://marketplace.atlassian.com/apps/1219592/github-for-jira?hosting=cloud&tab=overview). As far as I can tell automation does everything the app does and then adds a load more flexibility for customization.

I think I should just go for automation, but didn't want to spend a load of time going down that route if the marketplace app is complementary. 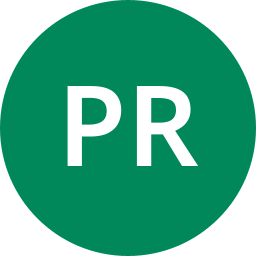 Whats about the trigger Pull Request approved   for Bitbucket  ?

Apologies for the late response. Just back from paternity leave. You should use both the app and Jira automation in tandem as both complement each other. I'm sure you have figured out by now but just in case you haven't :)

@Peter Reiser - at the moment, we don't have a trigger for PR approved but I'll let you know if that changes!

DevOps Triggers are not available in our Jira automation.

@Dean Comiskeylast I heard it was only supported on Cloud :(  Server gets no love any more as its been killed off.  Our company is migrating to data center, I suspect this feature will not be available there either but im not really sure.  Any idea @John McKiernan ?