I have a card on board ONE.  A Butler command moves the card from Board One to Board Two when the due date is one day before.

On Board Two all cards added are linked by using a further Butler command.

I've recorded a screencast which I hope expains it a bit better which you can view at this link.

Thank you for that video, it really explains the problem and it was great to hear a voice with a question!

You can set up another Butler command that would mark the linked card due date as complete, and it would look something like this:

Of course, you can pick the list/board etc that you want this rule to work on, or only set on specific boards, but this would mark the linked card as complete each time!

You're a star thank you so much!

No, you're a star for putting a video in your question! Utterly wonderful!

If you're satisfied that my answer answered your question, worked and does what you want, could you mark it as accepted, please?

That way, when other people have the same question and search for it, they are aware that this is an acceptable solution and can implement it themselves!

Feel free to reach out to the Community if we can help further! I'm a bit of a self-confessed Butler Nerd, so I'm more than happy to help with anything else you can think of!

Thanks Esme - I do have another query - one that I don't think can be solved as its a bit more complicated but here goes!

I essentially want to know can you set up a Butler command which says when the card above is marked complete send the card below it to board [board name].

Again, utterly amazing video! I know exactly what you mean and what you want! It's such a fantastic way to explain everything! Thank you so much for the link!

I'm just about to dish up dinner, give me a bit and I shall see what I can think of! At the moment, there's nothing that will do what you want, but I'm going to have a fiddle with Butler after dinner and see what I can create! I'm thinking that it might be 'doable' if each card is linked to the one above it, but let me munch and have a thinkie!

Right, I have a plan! Woohoo!

Can you screenshot a picture of what the original Butler command does, or if it's the same as mine let me know, because this is going to be a little bit creative! :)

Right, this is what I would do if it were me!

Stay with me here, this is gonna get messy!

We need to give Butler something to work on in the secondary board, you’re right, there’s nothing that we can do in Butler to make it pick the next card in the list...unless...we make a new Butler command in the secondary list to take actions when the original trigger on the first board does something within the second board.

What you already have:

So this is what I think you want:

In the Science board, I want you to link each card to the one before it. It’s a bit of a palaver, but it’s the only way that I can think of to make this work! Because each card sequentially runs from the one before it, we know that the next card is the next task that needs doing. I know it's going to be a bit of a bind to do this at the moment, but I would hazard that once you get used to it, it'll be a breeze!

You’re right, having a due date command won’t work because of the changing deadlines and changing start dates and some things take longer than others and things happen that mean that what a due date WAS doesn’t necessarily mean that’s what it’s going to be. So what you want is that the minute she completes one task, the next one automatically appears in the Home School board for her to work on.

What we need to do is tell Butler that in the Science Board, when a due date is marked as complete on a card, we want it to find the first card in the attachments (which will be the card underneath it) then copy the card and link the two together (hence linking each card to the one before it). 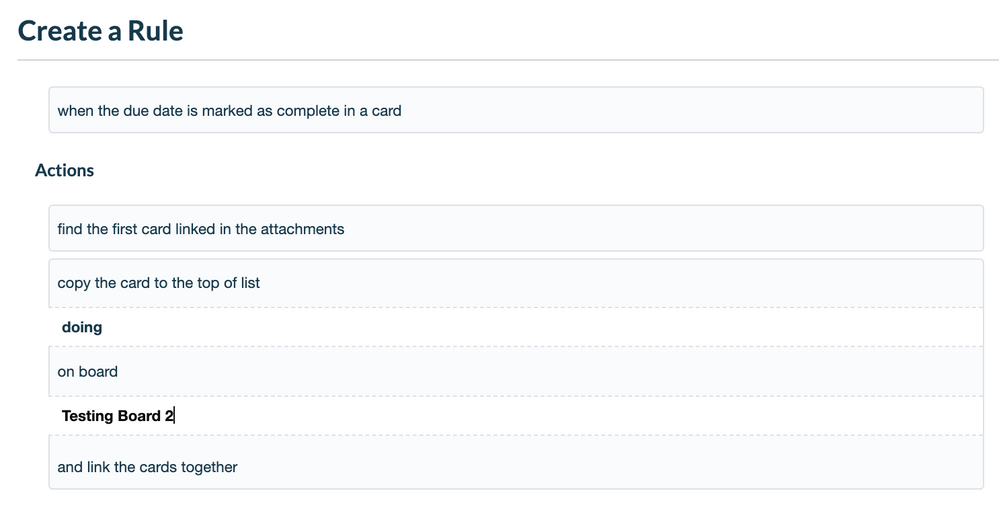 So the original rule on Home School will tick the due date in Science, then the second rule will kick in on Science when that due date is marked as complete. One rule follows on from another. This would also mean that anything you add to the Science board would automatically get copied and linked when it was ready to be worked on (as long as you link it to the card before it), hence, the Butler rule in the Home School board would already have a linked card to act upon.

I remember that you have already linked cards together so that might need to be changed because you don’t want to run a Butler command twice to do the same thing because that’s using your quota unnecessarily.

If you have multiple boards, for multiple subjects, you’re going to have to enable it on all boards, but once you’ve done it once you just need to go to each subject and enable it through Butler.  If you wanted to have specific rules per list, then you would just need to set the list name in the trigger. If you pick the less specific one (the picture above), then it’s just a case of enabling it on as many boards as there are that feed into the Home School board. Should you want to have separate ones for each list or board, you can always ‘copy’ a Butler rule and make changes to the copy. Say you have 10 subjects and you want the rules to be subject specific, then you would need to have a ‘master’ version then just copy into each board and change the list names.

This rule won’t run unless the original rule in Home School runs and triggers it, and it won’t run unless you link each card to the one before it. I know it’s a bit of a pain, but it’s honestly the only way that I can think to be able to get the ‘next up’ card into the right place using Butler automation.

Please let me know if this made any sense whatsoever!

Wow that was such a lot of work - I really appreciate it.

I've been super busy today so I'm going to set this up tomorrow and let you know how it goes.

Thanks again for all your help - I could never have done this by myself.

The only thing that might go wrong is the attachments. I don't have a clue how Trello organises attached cards when there's more than one; numerically, alphabetically, chronologically, not a clue!

If you run across a problem (I would do a few tests with test cards to see how it's attaching and organising) then see if the rule is good, or needs to change to 'find the last card linked in the attachments'

Please do let me know!

Solution worked fine but it revealed an issue that I had not anticipated.  Basically lets say we have Maths > Geometry > three lessons a week for two weeks = total of six lessons.

I would need to forward the original card six times so she can schedule it six times - such an idiot can't believe I didn't think of that.

So my work around is to create a Lesson Overview, lets call it Geometry Overview.  Then I set up inside Geometry overview a checklist called Lessons and I created a Butler command that makes a new card from each item of the checklist.  So I make six lessons inside the card which makes six cards linked to the overview card. I can then schedule all of those lessons to push to Fifi Home School page and that works great.

I found out that for Butler to work to sync the Due Dates you need to say its the last card because even though it looks like the first card in the list it's the last card that was added.

Let's go back to my six lessons inside geometry...

You should be able to use a 'trigger card' to make the magic happen!

This is just a rough draft, but this is what I think it should look like! 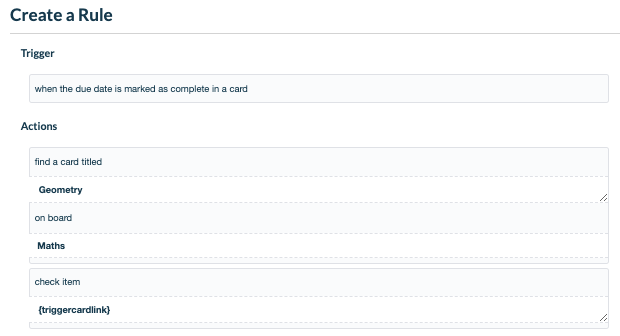 Of course, you'd need to add the list name or board name or something like that to the rule trigger, otherwise it'd be searching all over the place, but you know best how you want the board to work. You could even have specific rules for each 'subject' and keep the cards for a whole subject, with different checklists for each topic which would keep the rules down, but it's totally up to you!

I've never used a triggercardlink before, so I think this might be a bit of trial and error to see what works! I found all the variables and triggers here so they might be helpful for you.

I honestly have no idea if this'll work! Maybe try a testing card first and see what happens?!