Maybe I have too much time on my hands.... or maybe my ability to observe and be open to childlike curiosity indicates genius! Or, maybe, it's just a question!

What's the deal with that something-other-than-human toon figure in the Trello logon screen in the lower right? No nose, poor thing! Is that an imbedded screen in its chest and abdomen, making it a being of combined cybernetic and genetically engineered parts? .... Or is that just an area bare of hair? fur? feathers?

Clearly of giant proportions compared with the humans in the picture-scape. Is that Big Foot? Clearly friendly. If it had a beak, it could be a flightless bird-person, with those possibly wing-like, but not-ready-for-prime-time-flight upper limbs (maybe a genetically engineered penguin?). Is it gender non-conforming, with they/them pronouns? Do they have a name?

What was on the mind of the artist who created that screen... and the manager who approved it? WHAT'Z THE STORY!!!??? 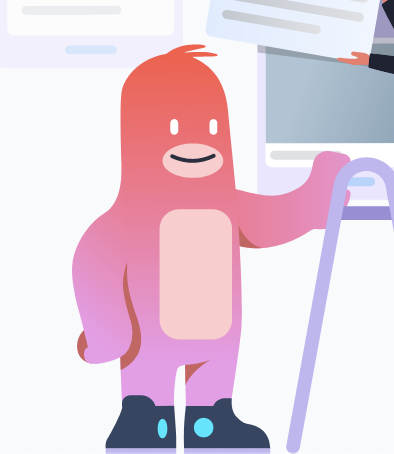