I'm using Trello to outline a story. Imagine each chapter is a LIST. And within each list, each CARD represents a SCENE. But sometimes there are, say, scenes within scenes, like a flashback. And I want that scene within a scene to "roll-up" into its parent card, so I only see that flashback scene/card once I open its parent card. In other words, it doesn't appear on the LIST unless I open its parent card. I basically am looking for indents, nesting cards, roll-up functionality.

I tried adding the "Hello Epics" power-up but that does NOT give me the functionality I'm looking for, which is a streamlined/neat/uncluttered/top level view of the organization, not all the details within. Is there a way around this???

Welcome to the Community! It's great to have you here!

Ok, so what you're asking for can't be done in Trello, but there might be a workaround.

If you have a list at the end of the board for flashbacks or scenes within scenes, you could put all of them as cards in there, then in the card for the 'proper' scene, you could have the cards attached and linked (so that both cards are connected with each other. 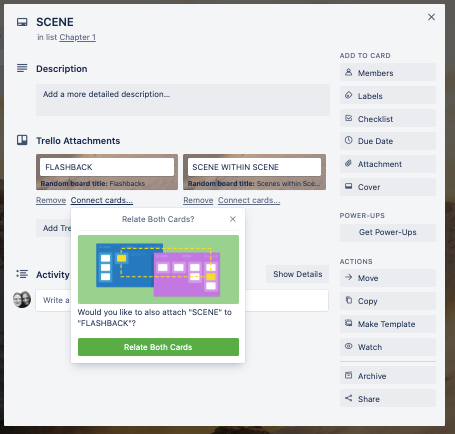 So the main SCENE card would have 2 attachments (Attachment > Trello > search for the card names). 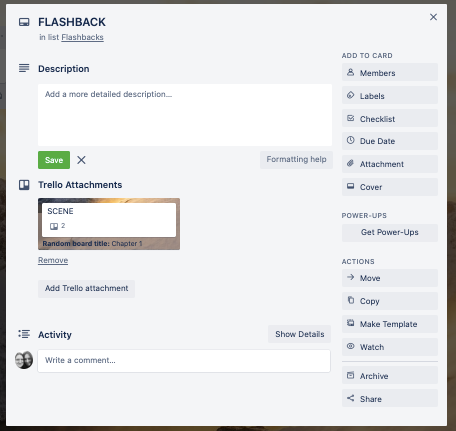 Then because you've related both cards, the 'child card' the sub-plot/flashback, would also have the relationship to the SCENE it comes within.

You could even have Chapter 1 Flashbacks as a list name, and have the same for all the chapters - that would mean that they stayed organised, but weren't in the way of the main SCENES. You can relate as many cards into the SCENE card as you like!

Am I making any sense?! Please let me know if I'm talking utter waffle and I'll try again!!

I really appreciate the quick reply! This is going to take my brain some time to grasp. Doesn't mean it's impossible, will just take me a bit. The reason I picked Trello is so I can drag and drop and make decisions on the fly, unsure of structure, wanting to decide, where to put a scene for example, or when to move a flashback, different chapters, scenes, etc. Just trying to use it for structure, for lesson plans, for organizing ideas and being able to see the structure visually. If that makes sense.

From one author to another, it's no problem at all!

When I started using Trello for my writing, I tried to have it all in one board, but that didn't work, so I ended up having a board per chapter, and a list in that board per event/scene or sequence. It really helped me to visualise what I was trying to do.

Basically I tried to have a beginning middle and end, so that I could move the cards around in the board in a way that made sense, rather than condensing everything down into 1 board and having lists per chapter.

Doing it that way meant that I could move things around, see what worked and what didn't, as well as having an 'extras' list at the end for ideas on the go, or things that I thought I might have bit might not! Once I'd written a chapter and everything was in the right order, then I could see it properly!

Maybe having a board per chapter might work better? Then you can have the SCENE cards as the top card in each list, and the sub-scenes/flashbacks underneath it, then when you hop back to the main scene you can have another list?

Basically the only difference is that you go across several lists, rather than trying to put everything into one list going down.

Don't forget as well, if you put a card in the chapter 1 scene 3 list and think "Actually, that needs to be in Chapter 4 scene 12" you can hover your mouse over the little pen in the top right of any card and click move and pick the board and list you want it to go into.

You can have a separate board for random thoughts that you can add on the hop, just to get them out of your head, you could use labels in that 'ideas' board so when you add a card you can label it with Chapter 1 if you think that's where it might go, so that you remember the context when you come to look at it again?

This is what I was trying to explain! 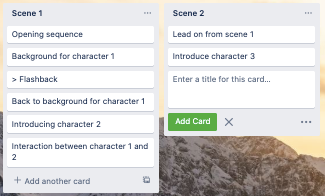 You could even have labels for the different sections. So the intro could be green, main bits could be yellow and flashbacks or cut scenes could be purple.

That way, you'd be able to see instantly which bits were which!

Not that I've done this at all you understand! 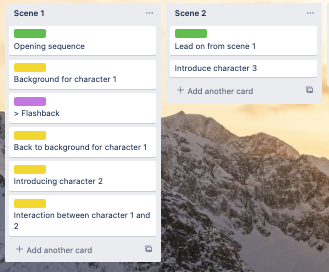