10 ways to get started with the Team Playbook

Ever since we launched the Atlassian Team Playbook in 2016, we’ve been peppered with questions from customers and members of our own teams. Most of them are addressed in the Team Playbook’s “about” page, but there’s one question – one I’ve been asked many times – that doesn’t have a one-size-fits-all answer: “What’s the best way to get started with the Team Playbook?”

For some people, it’s simply a question of which play to run first. Others are concerned they’re not the right person to suggest running a play because they’re not the team lead. And still others are curious how the team Health Monitor session can fit within their existing team rituals.

I can think of at least 10 ways to get your team started, depending on what kind of work your team does and whether you’re already running some of the basic agile ceremonies. (And, as you’ll see, I strongly recommend starting with a Health Monitor session). I’ll get to these 10 tactics in a moment. But first, a couple higher-level considerations for you to ponder:

Consider whether your team would respond better if the message comes from you, or from your team lead. To be clear, the Team Playbook is not intended as a resource for managers. It’s by the team, for the team. We strongly believe everyone on the team should “be the change they seek” – or at least catalyze that change. But that doesn’t necessarily mean every member of every team at every company on the planet feels empowered to do so. You know your team best. Do what feels right.

If you decide to send the message through your manager, bring it up at your next 1:1 meeting. Suggest starting in one of the ways listed below and talk about when you can get it on the calendar. In a perfect world, your team will dig the Playbook, and next time you want to try a play, you can just suggest it directly.

Take your team’s appetite for adventure into account. Some people are up for any thing, any time. If that’s your team, you could suggest, for example, running the Disrupt play to (finally!) come up with solutions to a problem that’s been on your mental back-burner for ages.

If your team isn’t naturally adventurous, make sure their first experience with the Playbook is highly relevant to what’s already going on. Maybe your team struggles with decision-making: you all know it, but aren’t sure what to do about it. Next time a group decision comes up, suggest running the DACI play to help get through the process more efficiently.

Ok: enough with the high-level. On to the tactical stuff. Here, dear reader, are 10 ways to introduce your team to the Team Playbook.

1. Start with a Health Monitor session.

Getting your team together to meaningfully challenge and improve the way you work is at the heart of team collaboration. The Health Monitor walks you through eight attributes we’ve found to be common amongst healthy teams and prompts you to discuss how your team is doing on each of them. Framing the conversation this way pulls your brain away from whatever project you’re focused on right now so you can think about the bigger picture.

You’ll give yourselves a red, amber, or green rating to reflect whether you’re weak, so-so, or going strong in each area. From there, you can refer to the list of plays that help shore up your weak spots. 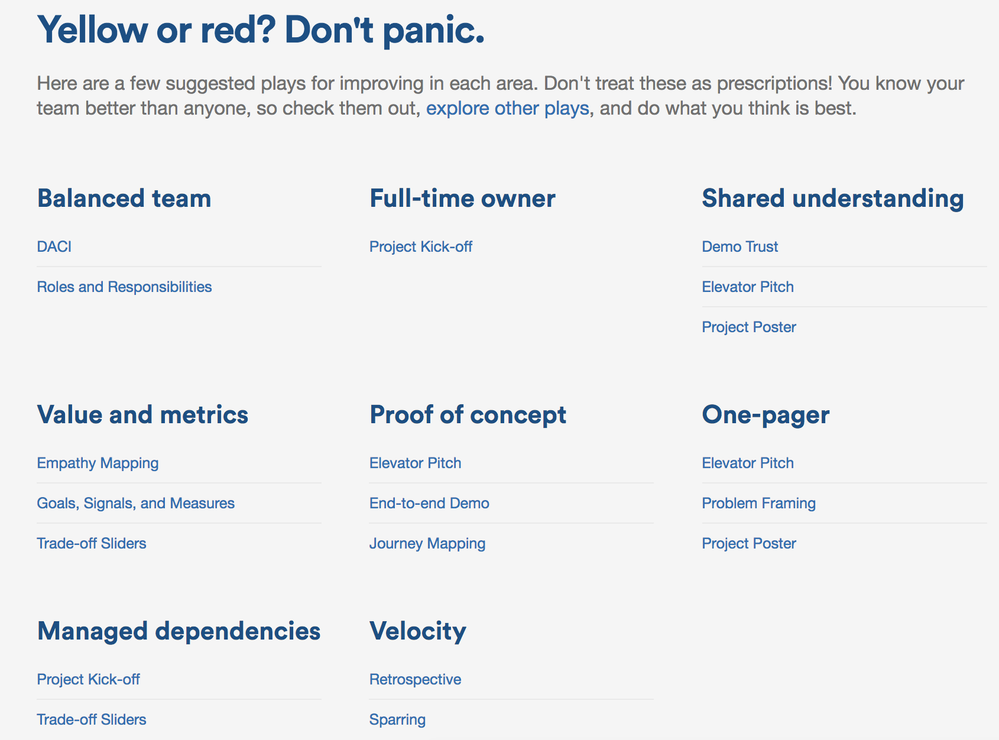 If the idea of rating your team’s cohesion, balance, customer-centricity, etc. (in front of your teammates, no less!) makes you break out in hives, take heart. I’ve facilitated over 150 Health Monitor sessions, and I’ve never seen a team who is green on all eight attributes. Never.

Even teams that are incredibly high-performing have one or two areas to work on. And if an attribute that was green in your first Health Monitor goes amber or red the next, that’s ok too. Ratings naturally fluctuate as your team’s membership, goals, and environment shift. The beauty of doing the Health Monitor regularly is that you’re keeping tabs and adapting to the changes around you.

2. Add retrospectives to your regimen of agile ceremonies.

Even if you’re not, strictly speaking, “an agile team”, retrospectives are a great way to reflect on a project or release you’ve just completed. They’re also great for generally reflecting on what’s working and what’s not. Plus, it’s likely your teammates have at least heard of retrospectives, if not participated in them. So you’ve got familiarity going for you, which is nice.

3. Kick off your next project using the Team Playbook.

Project kick-off is a play with a twist – sort of a play of plays. We lay out a set of core activities to include in your kick-off meeting, and suggest a handful of others to choose from based on the needs of your project. (New team working together? Add a 10-minute icebreaker exercise to the agenda.) Don’t forget to check out the new “Game Plans” sectionof the Playbook, too. There’s a project management game plan that includes our top four plays for delivering a project without losing your mind.

4. Kick off your next product feature using the Team Playbook.

Got a new product feature in the pipeline? Run the feature kick-off play with your devs, testers, designers, stakeholders before development starts. This play is a variation of the standard “get everyone on the same page” meeting you’ve probably participated in in the past. But instead of building out timelines or backlogs, you’ll use the hour to walk through the feature you’re intending to build, discuss how it fits into the overall user journey, and hold a mini-premortem. In return for your 1-hour investment, you’ll have a shared understanding across your team that will make the rest of the work go smoother.

5. Hold a premortem for whatever project you’ve got in progress.

Despite the morbid name, a premortem is actually a lot of fun, which is why I recommend it as a getting-started play (sort of a “gateway drug”, if you will). In a premortem, you get to imagine all the ways your project could go down in flames, as well as ways it might be successful beyond your wildest dreams. In other words, you visualize risks and opportunities before you execute on your project, when you can still do something about them.

6. Experiment with stand-ups for a month.

If you’ve been an Atlassian customer for a while, you might remember this guy:

So… just don’t do any of the things he suggests. If you’re doing stand-ups already, try the variations at the bottom of the play, or put your team’s own spin on it. If you’re not doing stand-ups now, then simply doing the basic version is your experiment. I hypothesize that your team’s communication will improve by the month’s end.

7. Level up your OKRs game.

Lots of companies use the OKRs framework for setting quarterly goals. It’s pretty powerful, but let’s be honest: there are a ton of details and nuances. So this quarter, challenge yourself to improve one aspect of your OKRs using the Team Playbook as a guide. If your team is like mine, you’ve been articulating your KRs as a glorified task list instead of the effect you’re going for. Rephrase them as measurable outcomes, and watch how much easier scoring is at the end of the quarter.

When the pain is acute, the source is often obvious. Browse the pain points on the Team Playbook home page (e.g., “Leadership deficit disorder”, “Analysis paralysis”) to see if any of them are what’s ailing you. Click on any pain point, and we’ll show you a handful of plays that can help remedy the situation.

9. Include a mini-sparring session at your next team meeting.

Peer feedback helps us deliver our best work, and sparring is a great technique for getting structured feedback. Try setting aside 30 minutes in your next team meeting to spar on a problem definition, solution options, or a design you’ve got in progress. Or, if 30 minutes is too much for your team meeting, reach out to a handful of the brilliant minds around you and put a dedicated sparring session together.

10. Start with a Health Monitor session.

I really believe a Heath Monitor session is the best place to start, so I’m mentioning it twice. Asking your team to open up and talk about *gasp!* feelings is intimidating, I know. So here’s a tip: bring up the Health Monitor at a moment when your team is talking about how you work together. If improving the way you work is already on the brain, the Health Monitor is more likely to be perceived as a natural next step.

And since it’s your “bright idea” (wink-wink), you’ll probably be asked to facilitate the session. Don’t panic. You got this. Yeah, it’ll probably feel a little clunky at first. But by the end of that first session, you’ll find your groove, and your team will thank you for leading the way.

There are three Health Monitor variants: project teams, leadership teams, and service teams. (And I’m working on a rapid-response team Health Monitor – watch this space!) Each variant has it’s own set of attributes to assess against because different teams need to be strong in different areas. Click that lovely green button below to check them out and familiarize yourself with the instructions for running a session.

My strong bias for the Health Monitor aside, the most important thing about getting started with the Team Playbook is to just start somewhere. Anywhere that feels right to you.

I hope my suggestions here provided some inspiration. Give it a shot, and let me know how it goes! Tweet up @atlassian using hashtag #teamplaybook, or share your story on the Atlassian Community site. Good luck out there.

I found my way back to this article while testing out the Community Kudos features. I recall reading back in 2018 but it was great to refresh my understanding of Team Playbook. Solid article! Thanks for sharing.