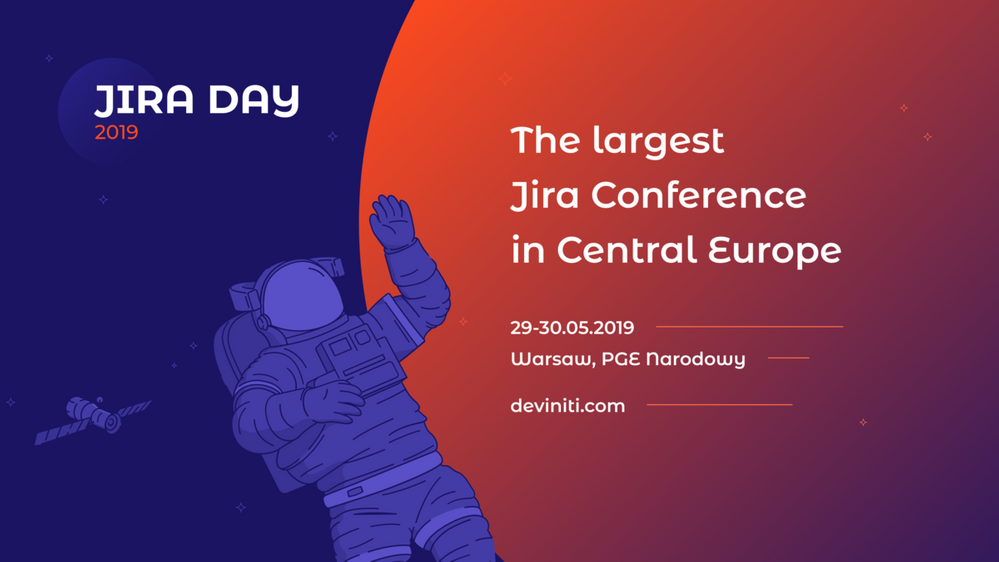 Over the last 5 years, we at Deviniti have organized over 20 events related to Atlassian products. Jira Day is the biggest of them, and it’s the largest conference of that type in Central and Eastern Europe. Well, some even claim it the largest non-Atlassian-owned event in the world! However, each year Jira Day is truly growing and becoming more international. During this year’s edition, which was seventh in a row, there were more than 400 attendees from 18 countries, 26% of whom were from outside Poland. 45 expert speakers and 15 Marketplace vendors added to our own 40-people crew at the PGE National Stadium in Warsaw with presenting their products and sharing knowledge from their experience, as well as the April’s Atlassian Summit held in Las Vegas. Here’s a brief report of what we were talking about.

Special guests from the Atlassian Ecosystem

Houston, we have Jira, we don’t have problems.

This was the motto of Jira Day 2019, presented at the event’s opening speech by our CEO Piotr Dorosz. Piotr showed how in the modern world, where technology accelerates exponentially, wonderful things are built with the help of software tools like Atlassian. The same idea was developed further by Feico Mol, Atlassian Head of EMEA Channels, who performed a kind of a time journey to track the way people used to work from the first industrial revolution in 1784 up to modern days. The process of producing goods transformed itself a lot over time: from manual production, through Fordism, it came up to the point where data is most valuable, and people build software to help other people build other software.

Teamwork practices changed accordingly. Even 30 years ago, most of us used to come to work for 8 hours a day and then leave, forgetting about it and becoming easily unavailable for the co-workers. Now that technology permeated our lives, we’re always online, often work remotely, and thus communicate through software tools rather than face-to-face. There are pros and cons to it, but to maintain a good balance, we need the right mix of people’s characters, tools they use, and practices to enable communication between all of them. Fordist approach to teams as conveyor belts isn’t effective anymore as well, because teams become cross-functional and often can decide about the comfortable pace of work on their own. Also, when knowledge is the source of work being done and not the physical effort, a touch of personality and autonomy becomes more valuable than strict standards and predictability, and energy becomes a more valuable resource than time. These changes also affect companies’ approach to leadership, which starts guiding instead of mandating, delegating responsibility and emphasizing the importance of communication across and between teams. The most important practices Feico mentioned were setting OKRs instead of KPIs, automating repetitive tasks and leveraging the Atlassian Team Playbook.

The keynote itself had an interesting twist, too. At some point, Feico proposed an exercise: he asked the audience to turn to each other and talk a bit about the current problems in their companies. Then he left the stage, and for a couple of minutes the attendees were left on their own, but they didn’t even notice it, so they were engaged in the discussion! 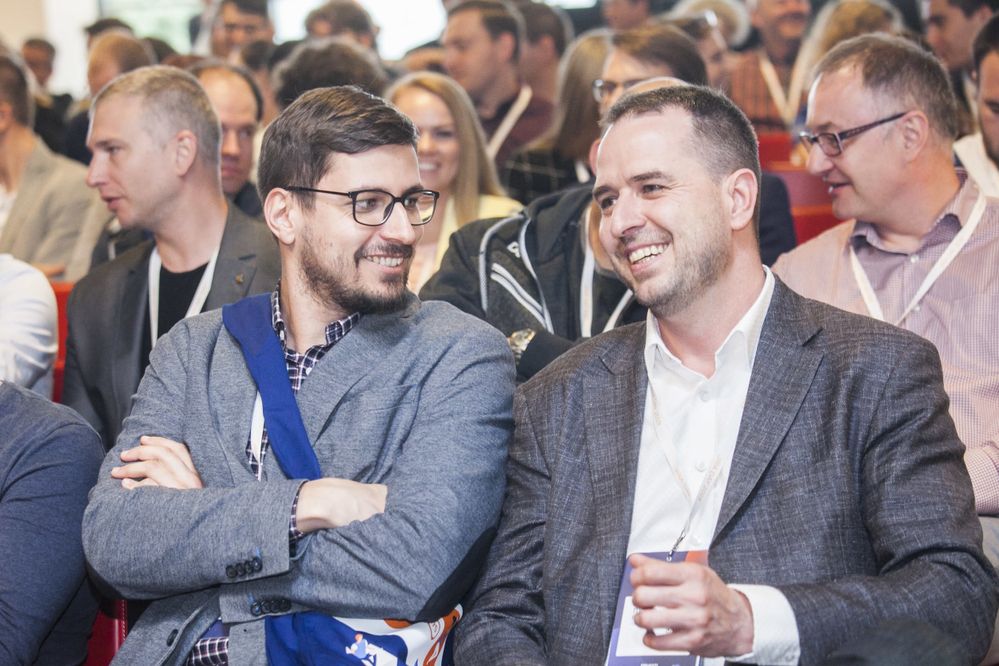 After the keynote, HP Indigo’s Atlassian Team Tech Lead and Israel Atlassian Community co-leader Tanya Gordon took over the stage with a story of how Atlassian software helps them implementing lean product development successfully. Shared project schemes, sprint cadences, and versions’ lists in Jira helped them streamline the production process and distributing tasks between working teams. The team also had to define clear permissions via project roles, extend the out-of-the-box default assignee concept and create a cross-team issue navigator with advanced JQL. To increase transparency and availability of project data, they make use of BigPicture boards and custom per role reports set up in eazyBI.

Proper knowledge management is of high importance as well for big LPPD teams. At HP Indigo, they’ve created generic templates for so-called organic teams’ and working teams’ spaces in Confluence. Each of those would contain different sets and structures of content. The next issues were automatic labeling and easier searching for pages, which they’ve solved with creating custom page templates and using Brikit Targeted Search for Confluence. 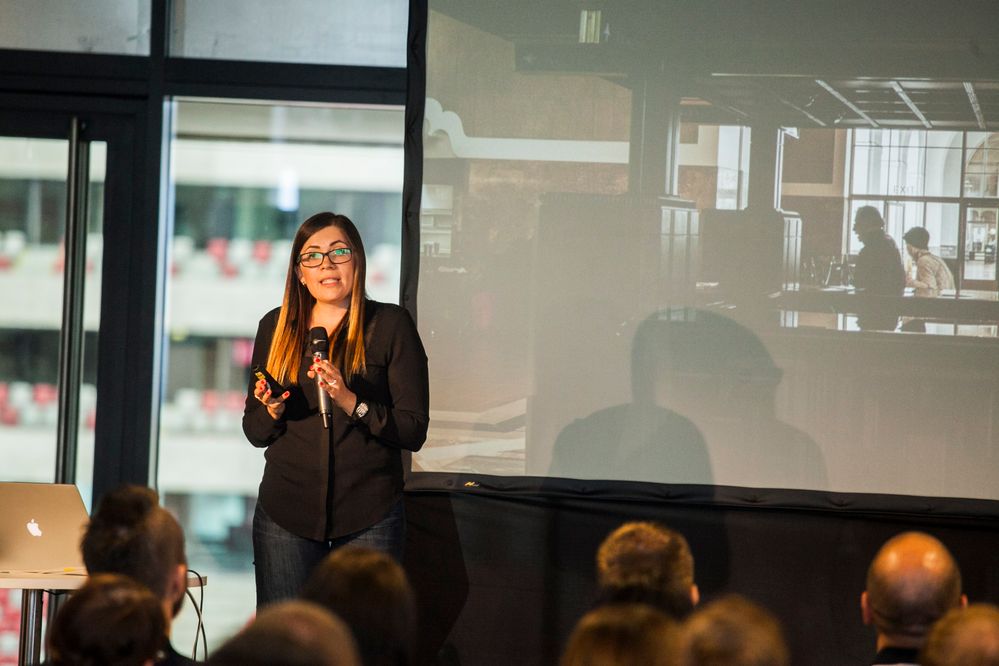 As we can see, even though our event is called Jira Day, it’s not dedicated exclusively to Jira, contrary to a common opinion. For another example, this time we managed to have the Ecosystem superstar Serhat Can as a speaker! The Opsgenie engineer and ambassador, who is now one of the most wanted guests at IT conferences around the globe, went on stage during the first day with a thrilling narration about incidents.

Did you know that even if we have 99,9% uptime, which is already a difficult task, it can still be not enough for our customers, because it is in fact 8,76 hours a year offline?

This is especially difficult if you’re serving someone like 911, who can’t ever have a single moment of an outage. Different sources provide different IT downtime cost, but the figures are always impressive, as the global estimations vary from $700 billion a year to an astounding $4 billion a day! What’s more, after a major data loss many businesses simply shut their doors and can’t go on anymore.

So the goal here for the Turkish team along with Atlassian was to build a centralized DevOps-compliant workflow for alerting, notifying, escalating, fixing and learning from incidents, which happen inevitably if a company works with or relies on data. To accomplish this, they had to make their software integrated with over 200 different tools used by both Dev and Ops teams at work, as well as allow to execute on-call alerting via SMS, phone calls or push notifications. Recently, the team has added postmortem reports, automated actions, and other features they announced at this year’s Atlassian Summit. 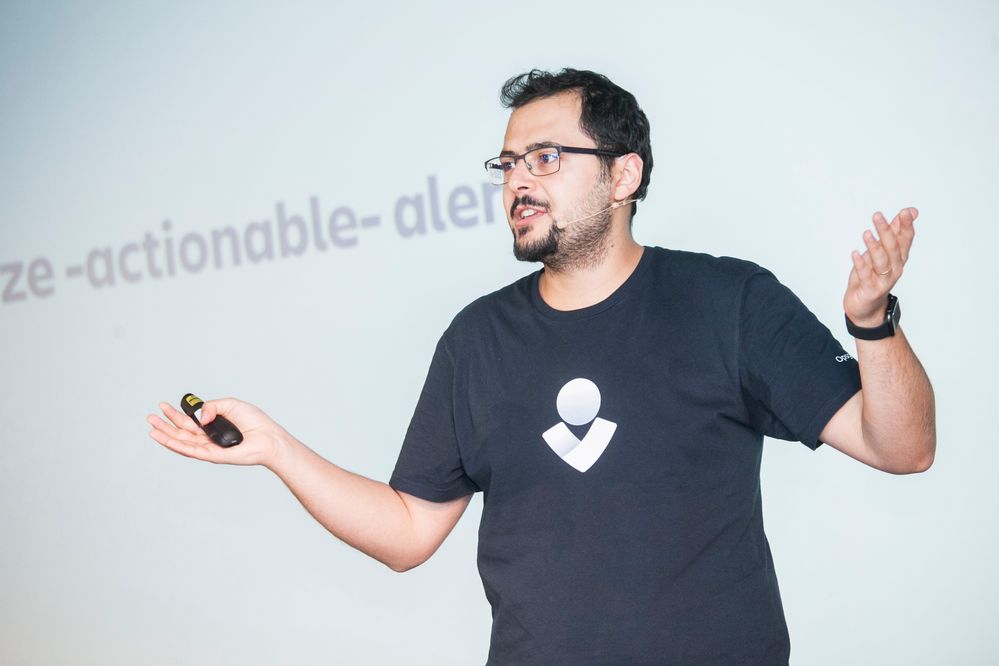 Nevertheless, Jira is still the king (or should I say the queen?) of Jira Day, mainly due to the continuous growth of this tool’s adoption. This shouldn’t be a big surprise, as Atlassian reports around 40% year-to-year growth and a total of 150,000 customers to date. Companies across all Central and Eastern Europe are still discovering better ways to track their work, so topics like implementation, migrations, or setting up such tools have always been a big chunk of the event’s agenda. For example, independent Atlassian Consultant Bogdan Górka described the most common pitfalls he comes across on each stage of greenfield Jira implementations. Among them are:

and many more. The general message of Bogdan’s talk was that when the decision of implementing Jira is made, it should be supported by people on each level of the organization to be successful. The topic is eagerly discussed among starting admins on the Atlassian Community as well. 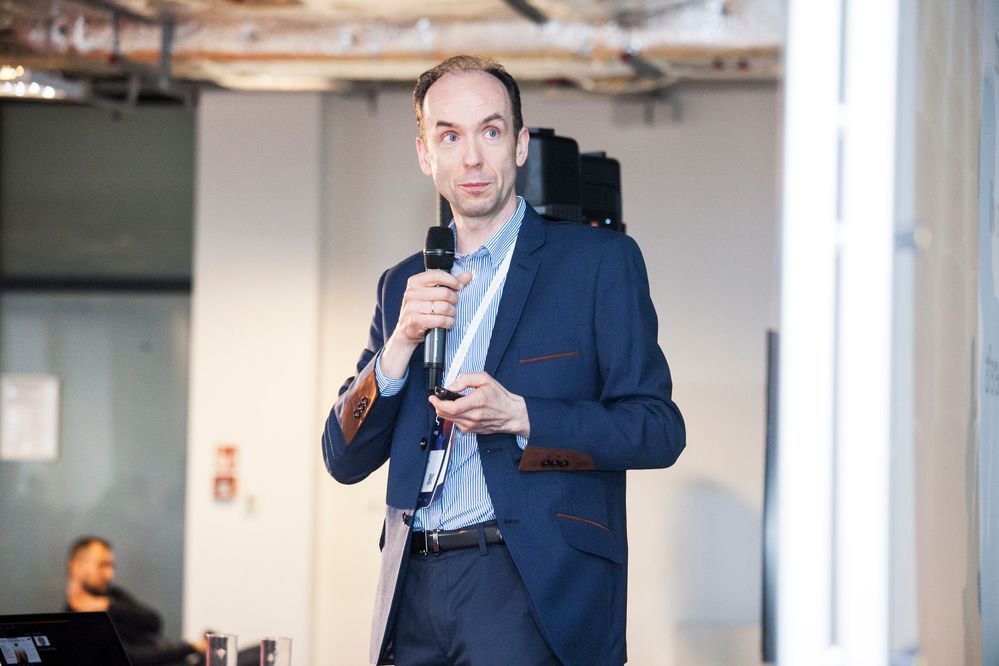 This year’s edition of the conference can be also marked as the one having most Atlassian attendees as well as speakers. For instance, Senior Product Managers Jakub Kurcek and Małgorzata Kowalska shared the news about Jira Software 8.0 and Portfolio for Jira 3.0, and Senior Software Engineer Ilya Zinoviev told the history of developing Jira Data Center.

The first-ever announcement of multi-node Jira took place at 2012 Summit. Back then, it was suggested that ‘people took Jira out from the server under their desk and put it in their Data Center.’ But a couple of years later, it turned out that not only the business giants wanted to benefit from availability during reindexing and higher performance of their large instances, but also their fast-growing peers, who could not afford or didn’t want to host their own data centers. So Atlassian redefined the mission for their enterprise offer in 2016, right after the idea of their infrastructure move to AWS emerged, code-named Vertigo. Since then, companies could deploy Jira Data Center to a cloud infrastructure such as AWS or Azure, thus achieving more flexibility. Other key features developed over time were zero downtime upgrade, project archiving and native SAML support. Right now, the team is working on full GDPR compliance of the product, archive browsing, and CDN integration.

Want to know how Atlassian team fixes bugs of Jira Software, how to set up a team workflow with 24h task turnaround and a 96% on-time delivery rate, and more? Read the second part of the article!