What is the best practice for managing epics per version?

I am interested to hear how other users are managing their Epics and versions.

I can see two approaches:

There may be other suggestions.

If you take approach 1, the drawback is that the Epic Burndown report and Epic Report may be of limited use. For example, if you have an Epic 'User management module' which contains some issues which will be completed in version 1.0, some for version 1.1 and then others which are just sat in the backlog, the Epic will never be definitively completed. You cannot filter these reports by version. Useful code change: Allow Epic Report and Epic Burndown reports to be filtered by version.

If you take approach 2, you get more control. You can run reports from 'User management module (1.0)' and 'User management module (1.1)' separately, and keep loose items in the backlog classified by epic, e.g. 'User management module (backlog)'. Once you release a version, you can close one of the epics off and move unfinished items into another one. The downside is that on the epics panel on the Scrum backlog view, ALL epics are always visible, just greyed out per version, regardless of whether you select 'All versions' or not. This facilitates moving them between epics but you end up with a high amount of clutter. 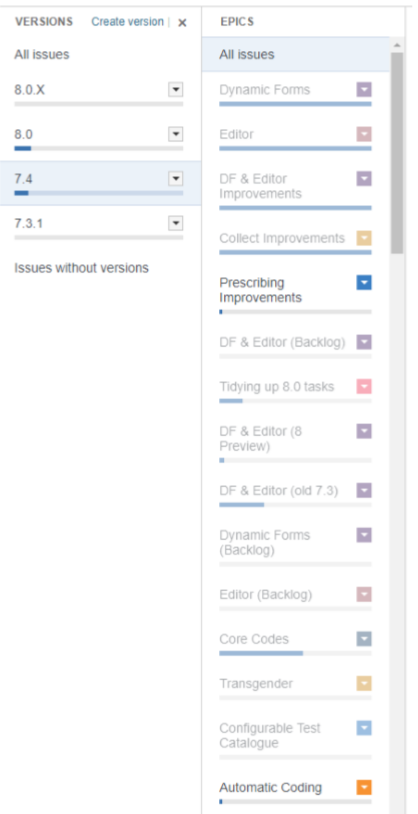 Useful code change: use Fix Version(s) field for Epic issues to control which Epics are visible for which version, rather than just greying them out if none of their linked issues exist in that version. Previously I got around this by adding some custom CSS in the announcement banner to hide them, but this is no longer possible in Jira Cloud.


How do people manage their Epics across versions?

Do they have Epics which could continue on forever, in which case it is more of a challenge to measure performance against completing that epic?

Do they have lots of smaller Epics but then just deal with the clutter in the epics panel?

Do they leave backlog issues unsorted and only move them into epics when they are planned for a release?