I have been working with Atlassian products for many years now. I started out with server solution for Jira and Confluence back in about 2011 and that carried me thru two different companies. In 2016, I moved to the Cloud for my new and current company. As many will likely agree, the Cloud can be a bit of a roller coaster with all the patience of climbing the hills to the excitement and sometimes scary dips and turns. While I have certainly been frustrated at times navigating thru sometimes daily surprises I will say that I love the Cloud warts and all. IMO, the benefits far outweigh the negatives. At the same time I am quick to acknowledge that Cloud isn't for everyone. At least not yet. ;-)

As an active Community Leader one thing is for sure, I get a great deal of exposure to how others feel about the Atlassian products. I thought I would start a discussion here about one of the more polarizing changes that has been introduced in the last year - Jira Cloud New Issue View.

My goal for this discussion is to create a thread where folks can share the things they love, hate and remain hopeful for where the new issue view is concerned.

I want to make this a positive experience for all but also want folks to share how the honestly feel. I want this thread to be something that Atlassian product managers can review and leverage when making decisions about the changes they rollout for the new issue view. With that in mind please consider the following when replying:

As this is cloud and changes are happening daily some of this will be dated by the time we post it. But that is fine IMO.

Thanks for starting this discussion, I think its a great idea.  Our company is very new to Cloud.  We migrated a 5 year old Jira Server in September,

The new issue view was a bit of a shock for us but not all bad.

I have also encouraged all of our users to provide feedback directly using the feedback link.

Great input Jimmy thanks for sharing. Agree that being able to turn off or switch back and forth is the right approach. Interesting note on the cascading fields. TBH I hadn’t even run into that but do have a few projects where that is used and will need to have a look. For sure that will be a big issue for those folks using this I expect.

your last point is a really good one and extends to Cloud challenges as a whole. That is - “As an admin and advocate for Atlassian products, it can be quite frustrating to have users stop by and inquire about some change that you aren’t even aware of and cannot immediately answer.”

Pretty much most of it - it's a lot cleaner and easier to use. It took a while at the beginning to get used to it, but having stuck with it I'm really pleased with it.

I find it really useful in backlog refining to have the Description showing as well as being able to edit the estimate and some custom fields we use.

The navigation extension, which puts the menu items across the top of the screen.

Having the estimate and remaining time rolled into 1 value - this is the situation where I need to revert to the old view the most. We sometimes need to change the estimate, once some time has already been logged - in the old view I can adjust the time for both the Original Estimate and the Remaining, whereas in the new view i only have one field available.

Another area where I need to revert to the old view is removing a date value. We have a custom field (date time picker) which we use a lot. If we've put a date in, there is no way (that I've found) to remove that date, apart from reverting to the old view.

Thanks for the discussion Jack.

Warren thanks for sharing. Yep time management isn’t what I would hope for either. To be honest the old view presented challenges for me too but got used to it and, as you stated, was flexible to allow all necessary adjustments. That is a very timely comment on the date fields. I was involved in a question in the Community just this week about clearing the Due Date. While I am able to revert to “none” it was a bit clunky and more importantly others in the thread could not clear theirs. By clunky I mean that I could click into the field and hit delete and enter and it would revert to None BUT when I hit delete the date remains until enter or defocus is initiated. I would expect the date field to be blank when I hit delete to make it obvious it did something.

regarding the Navigation extension I’m not sure exactly what you are referring to but intrigued and will investigate.

I had seen that thread about deleting dates. I tried following your steps using Due Date and I couldn't get it to work, plus it definitely didn't work for my custom field date picker.

The Navigation extension is a Google Chrome extension which moves the Project, Issues, Tempo menu items from the left side (vertically) to the top (horizontally)

Another item that is missing from the new view is the ability to configure what details show in the parent about subtasks. So in the old view, if I scroll down to the Subtask section, I can configure which fields get shown, but I'm not able to do this in the new view (yet, hopefully)

Better readability on smartphones and other devices.

Being able to Rank issues to Top or Bottom is something I regularly use, but is not available in the dropdown anymore in the new issue view. Yes, issues can still be ranked from the Project Backlog view, sure, but making a snap decision you can refine later is no longer possible, you have to do several additional clicks to Rank, if an issue is important or unimportant (or have a good memory which I try to save for other things than Backlog Ranking).

I also don't like the new JIRA issues view breaking attachments on issues created with the old view. I've attached an example. This is not dependent on loading as the error says "Failed to load", I logged out/in and reloaded cleared cache several times. nothing helped.

I was contacted by Giles Brunning when I gave feedback on the 1st issue, but nothing has been done to remedy. Now confronted with the 2nd issue I have no choice but to switch. Unlike other people commenting this thread, I do not feel JIRA is listening to their community, because I feel forced by JIRA. 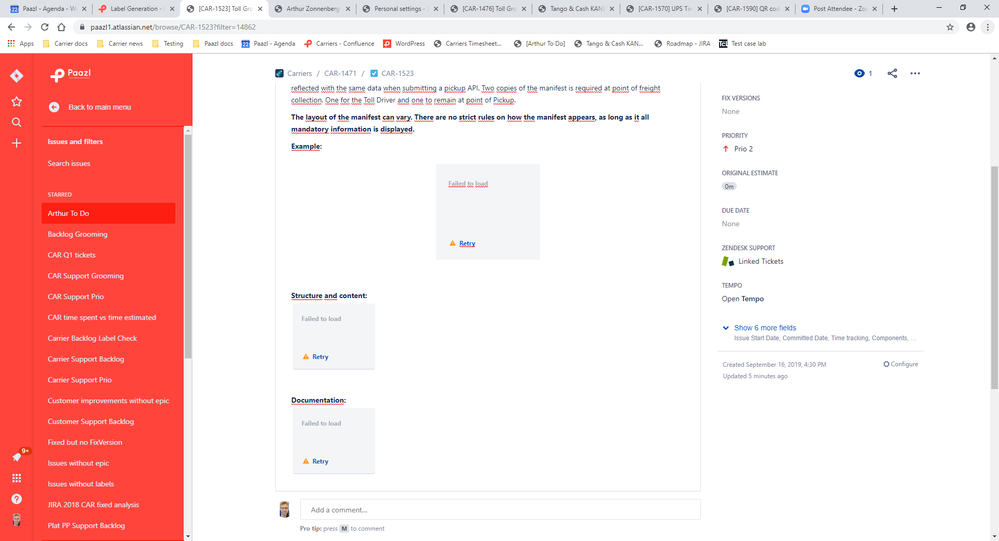 https://jira.atlassian.com/browse/JRACLOUD-73309 if you read this and also miss the rank to top / rank to bottom from the detailed issue view, Watch + Vote here :)