Kanban is a popular agile framework suitable for both operations and development teams. It does not matter if you are a support team handling issues reported by customers, an internal service desk team or a company that delivers pizza, Kanban helps you visualize both the process (the workflow) and the actual work passing through that process. Also, it helps you identify potential bottlenecks in your process and fix them so work can flow through it cost-effectively at an optimal speed or throughput.

A Kanban team that uses Jira for tracking the Kanban project should also have a team dashboard for tracking their project and work, for having all the metrics & charts centralized in on place. Then, this dashboard could be used as "information radiator" or being displayed on TV screens in the open space.

Here is a list of gadgets that can be used to build a powerful dashboard in Jira for tracking a Kanban project in an effective way.

Agile Wallboard Gadget – displays the Kanban task board of the team showing the current status of the issues and their current assignee. Also, it helps you determine bottlenecks – the columns that contains more issues as they should, based on the WIP limits.

This is a Jira native gadget.

Reported vs Done Chart – Shows the line chart of reported issues and done issues along the time. This chart tells you how your team handles the workload in time. It gives you a clear indication if your team manages to resolve issues fast enough for maintaining the backlog size in acceptable limits.

Such a chart is offered by Great Gadgets app for Jira. You can generate the chart not only by Issue Count but also by sum of Story Points, Original Time Estimate or by any other numerical custom field defined in your Jira instance. This is useful if the issues in your backlog do not have the same size / weight.

Control Chart Gadget – shows the issues done in a specified time period along with their cycle time or lead time in a scatter plot chart. You can use this gadget to identify the issues that took longer than expected – the ones that are over the average time or over the threshold that you set. Simply hovering the mouse over a point from the chart will display a tool-tip with the issue key, cycle time and the date when its cycle was finished. 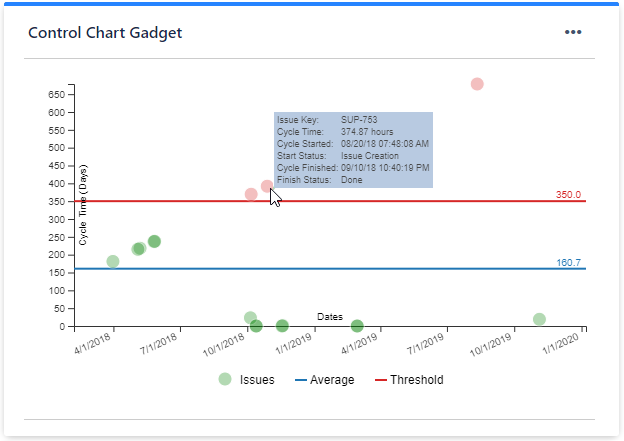 It can also display a data tab, with more details about each issue. Also, it can be configured to generate the chart based on cycle time, lead time or time between two statuses. This gadget is offered by Great Gadgets app for Jira.

Cycle Time Trend – calculates and displays the average “Cycle Time” or “Lead Time” for the past time intervals. Use this gadget to see how fast your team delivers in time, how quickly the issues are marked as done along the time.

It can also display a data tab, with more details about each issue. Also, it can be configured to generate the chart based on cycle time, lead time or time between two statuses. This gadget is offered by Great Gadgets app for Jira.

Cycle Time Histogram – calculates the average “Cycle Time” or “Lead Time” of the issue from a filter or Kanban board and displays the distribution of the values as a series of bars. It helps you determine how the team performs along the time, how many issues had their process time in acceptable ranges and how many did not.

This chart is offered by Great Gadgets app for Jira.

Kanban Velocity / Throughput – calculates and displays the team’s velocity (throughput) for past time intervals and the average in term of number of issues (cards) delivered in a given period of time. It helps you determine how the team performs along the time.

This chart is offered by Great Gadgets app for Jira.

Issue Formula Gadget – shows the result of a math formula (like COUNT, SUM, AVERAGE, MAX, etc) applied against the field of the issues from specified filter. It helps you calculate and display key-numbers like total unresolved critical issues or backlog size.

In conclusion,  by using a combination of the Jira native gadgets and the gadgets offered by Great Gadgets app you can build an effective and powerful dashboard for tracking your Kanban project.  Great Gadgets app by StonikByte - an Atlassian Gold Marketplace Partner - is available for both Jira Server and Jira Cloud.

Thanks for the article and add-on!  Several of our teams use your product to help make workflow issues more visible.  Here are a few, "yes, and..." items for dashboards using Great Gadgets: