I've always struggled to read the cumulative flow diagrams in our Jira. Today i read that the diagrams should never go down, however all of ours do - can anyone give me any clues or advice as to why this may be happening? 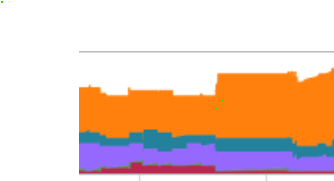 Cumulative flow diagrams work off the concept of "work" (issues) always being added to the backlog. If you aren't adding as many issues into the backlog as you are closing then then diagrams should be going down. So never is a strong word as it depends on the project. If this is a project that has a finite time definition of when it is ending and it is being wrapped up, then you probably do want the diagram going down. If the Jira project is a project that is constantly being used to track a teams work including future projects, then no, it probably should always remain consistent.

Let's give an example. You are rolling out SSO to a company so you create one project for rolling our SSO. Well, in this case as the SSO gets closed to being rolled out, the diagram goes down. At the beginning though, it probably sky rocketed up and for a period of time remained consistent.

However, here's a different example using the same SSO example. Instead of creating a new project to role out SSO, the IT team created an SSO component in their project. They also created another component for their next project, migrating Trello to Jira. As the Trello project is the next one, they just leave the component empty. All of the work for the SSO project remains consistent for the 3 month period they work on it but as they start wrapping down the project manager starts adding tasks in for the Trello project. Thus the board stays consistent. One person finishes their work for the SSO project ahead of another, now they can start pulling the work from the next project.

The latter description is how Kanban was initially designed to work, new issues constantly being added. And this is when you will see the board remain fairly constant. And if it is not then something is wrong. However, if the first described method is how your teams operate, you should see the boards go down. Though I would suggest working towards the second method if Kanban is what they want to use. Doesn't need to be exactly what I said but there should always be work coming in. Whether that be creating more complex board filters or using components or some combo.

Hope this makes sense, let me know if you have questions.

Hey Ray - Sorry, but that is definitely not what a CFD should look like.

I suspect that you are allowing issues to regress to the same status it was previously in. In the world of Kanban tools, that will kill any reliable CFD. As the name suggests, it is Cumulative. The word Cumulative by nature/definition can never go down. So any color (i.e. status) in a CFD that ever dips down is wrong.

There's a lot more that could be said. but suffice it to say that if you allow issues to "go backwards" to previously visited statuses, then your CFD and Time in Status reports will never be correct.