How to close a ticket when resolved by the reporter? Multiple scenarios. I have rules that are triggered based on time, but I would need to create a rule that closes a ticket when a reporter transitions an issue to "resolved" without causing any conflicts.

Any guidance is appreciated. From what I am understanding, There shouldn't be any issues here.

in addition to Amanda's input, you also have the ability to set a condition in your automation based on who transitions the issue, i.e. if a customer do "x" if not do "y".

Thanks @Amanda Kirk and @Jack

To confirm, is my current setup correct? The time trigger rule will be ignored if the customer manually resolves an issue?

The customer "resolves" the issue. 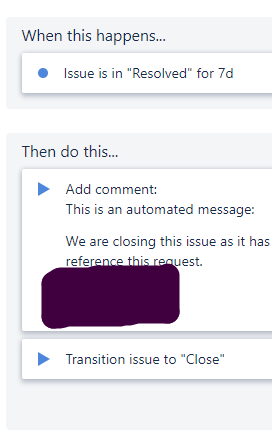 So by manual close you mean the user is transitioning the issue to close themselves (not automation doing it) correct?