Is Automation for Jira available in CLOUD ?

We are on Sever now and Planning to move to Cloud.

Observed that "Automation for Jira" is not available for Cloud, Will it comes as Inbuilt with Cloud ?

Yes, its now a built-in feature for cloud. Usage limits depend on your license.

Hi @Linda Milne_Know Business_  Thanks for the information.

What does 500 executions per user means?

I am the admin of my site and All the automation rules will run with my Name.

Suppose if we have scheduled rule executes for every 2 hours in a day which means the single rule will executes 360 times in a month with my name.

If we have 2 scheduled rules, that is it ? All other rules will not work for Standard Plan !!

This is how the Jira cloud Automation works ? Please clarify!

Customers on Free and Standard plans have access to a limited monthly trial allotment of global and multi project rule executions (100 and 500 per month, respectively).

Rule execution (from the docs) is:

Your usage is measured by the number of rules that have been executed during your billing period.

A bonus is that:

What doesn’t count towards my usage?

So, can you reduce the number of times you execute the global / multi-project rules and / or move to running some rules from within the projects?

Thanks for the Clarification.

Ok, Limitation is only for Global / Multi-Project rules.

Please correct me if I was wrong!

Only burden is to write the same rules for every project, That is not a big deal...Some thing is better than nothing.

Once again thanks a lot for taking your time and writing all this.

Madhu, if your daily automation is cross-project (includes more than 1 project) you can try to workaround it by splitting your rule among the projects. In case it's a global automation rule (available again for multiple projects) you can simply copy your rule in every single project.

Thanks for taking your time and clarifying..

We will try to split the rules among the projects. Anyway we will have 500 global rule executions to work with if we have cross project requirements.

Looks like this 500 executions for the whole year ? Or it is a monthly executions limit for cloud standard ?

When you switch to Jira Cloud you'll have a good overview over the usage of the automations addon, including the number of executions you have used, how many days you have left until the counter is reset and on which date it will be reset exactly.

And yeah, it's reset on monthly basis, not on yearly.

@Linda Milne_Know Business_  speaks sooth. Moreover, with a bit of twiddling, you can export automations out of server and import them to Cloud. HOWEVER, you need to make a stop in the middle.

Export from Server. Look at all the object IDs in the exported JSON file and then replace them with what the object ID is on your target cloud instance. Import them. They work.

You can import them without error withOUT making that stop but a) they won't work and b) it's not as easy as just selecting the missing bit because the object ID changed; the whole chunk of the rule is missing and needs to be redone.

Automation for Jira certainly is part of cloud. If you can get to the "project settings" of a project, you can access the "Automation" section for that project.

It's worth noting, if you are on Jira standard, multi -project and global automation rules have monthly execution limits. See @Linda Milne_Know Business_ link for details. 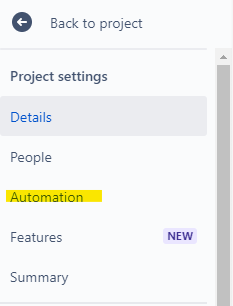