really hope for a productive discussion.

First of all, I wanna give you some background to understand what's currently haunting me:

We're using Confluence Server as Knowledge Base - a wiki for all employees. We have a 250 people license with 100 registered users. That's because when we started this project 1,5 years ago we looked for experts to work on topics and create content here in our german headquarter. Even that we have 15 different locations all around the world it was decided to use Geman as the only language. As you can imagine wiki grew pretty fast and new people came to the project.

As everyone was super excited and had new ideas - we opened Wiki to all employees (especially in production) which brings us back to the language problem.

Most of the starting users and people working in office speak pretty good german - but now coming to our colleagues in production it's getting hard. We definitly need 6 more languages for the spaces that are important for the production people (English, Portuguese, Russian, Polish, Chinese, Italian) - but they only have anonymous access to the Wiki as they won't create any content and don't have their own computers.

Now I want to know how you handle language in your confluence.

I'm testing addons like Scroll Translations, Language Manager and Language Switch, but I'm not sure what is going to work and what could work for us. Especially as we're using a programmed theme for the wiki that get's in conflict with some addons.

What would be awesome:

Do you have an ideas on how to manage that?

What are your experiences on language addons?

What problems are you working on according language?

Pretty excited about your experiences - thanks in advance

All three add-ons can help you to archive your needs.

Additionally I can recommend the Language Add-on (disclaimer: bitvoodoo is vendor of this add-on, this is not intended as advertisement, just as recommendation). It enables you to have content in different languages on a Confluence page. Only the Content of the users Language is shown.

Language Switch for Confluence is the easiest way to let everyone (including anonymous users) change their language easily. So that even the navigation is in the wanted language, and not only in default or browsers language.

Take note that combining these add-ons does not go well. Except maybe for the Language Switch, this add-on could possibly work as addition to the other three add-ons.

I was just about to mention the Language Add-on but you beat me to the recommendation. :)

thanks for your input - gonna try this out.

Language switch sounds very good - have to figure out how it works with our costumized theme.

All four add-ons have a different approach. I suggest maybe do an evaluation of these add-ons and try them in a test space or a test Confluence instance.

I really liked Language Addon - can you make it working together with Language Switch.
Any experiences about that, cause you mentioned it in your reply?
I'm a little bit unsure because we have really long articles in 7 languages but gonna give it a try. Hope it's not going to end in macro in macro in macro confusing look when editing.

Do you know if the notification function from confluence is working with Language Add-on? I'm seeing a problem here because you will only see the content in your chosen language. Will you get the notification that something has changed and will you see it?

I misinterpreted Languages Switch's function. I think it won't work the way I thought with Language Add-on.
Here is explained how Language Switch is intended to use: https://confluence-apps.beecom.ch/display/LSC/Example
I assumed it changes the users language setting. But you will have to work with multiple pages and labels.

bitvoodoo's Enterprise Theme comes with a small language switch built in doing what I expected to happen. But honestly, just getting the Theme for this would be overkill! 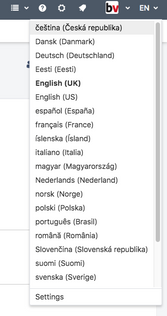 Regarding notifications: Since Language Add-on works with macros, changes in each language Macro will trigger a notification (if not deselected of course). And depending on your notification settings the changes of whatever language will be shown.

Ah ok - I will have a look on the link you sent.

bitvoodoo's Enterprise Theme comes with a small language switch built in doing what I expected to happen.

Believe me - I'm open for every solution at the moment...

Regarding notifications: Since Language Add-on works with macros, changes in each language Macro will trigger a notification (if not deselected of course). And depending on your notification settings the changes of whatever language will be shown.

But there won't be an option to get only notifications for the language you work on, right? Sounds good anyway. What makes me feel a bit uncomfortable is the opportunity for all users who have permissions to work on the page, can also delete or change the work from the other users. (Ok thats also when you have seperated pages, but on the same page it can happen by accident so easily)

Here is a screenshot of a page in edit mode using different language macros, maybe it gives you the idea. :) 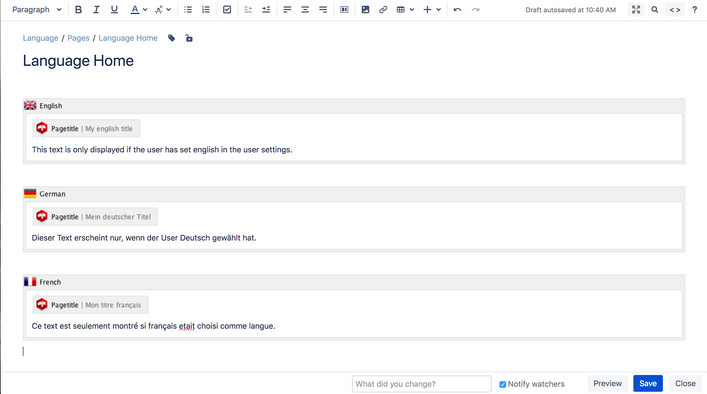 I will give it a try!

Do you know if there is an option to also change space names? (according to language)

Will the navigation to the spaces and articles be shown in the chosen language?

Hi @Fabienne Gerhard, sorry we can't influence the Space names with our add-on.

Only page contents and page titles.

@Sloan N_ B_no problem according to spaces - still in try out mode and it's really hard to find a solution working.

Does Language Add-on only work with costumer settings or does it also work for anonymous users? We need that for the people in production who don't have an account for Confluence.

Have you also considered Google Translate? You can embed their translator on your site in Confluence Admin -> Custom HTML.

It bears mentioning that Chrome will auto translate pages if the language of the page does not match your language. While it's not perfect I have found browsing some German sites that the translation was decent enough that I understood the page ... my native tongue is English.

thanks for your idea too - that was also my first idea.

Scroll Translations — that you are already trying out — can achieve most (if not all) the points you mentioned in your original post.

I am working for K15t, developer of Scroll Translations. If you would like a demo of the app, drop me a line at support@k15t.com.

thanks for your help. Scroll Translation sounds good - didn't have the time for a real try. It's like every time we are in Tryout mode we stumble across a new problem.... sorry challenge ;)

Does Scroll Translation work with anonymous users? Can they choose their language or how does it work?

If a page is not available in a certain language, it won't be displayed in the page tree.

Is there a possibility to show the page in a language where it does exist? (would be german in our case - for our collegues in Brasil it would be english, but that's the next step)

Another question is space names - can you also change them with Scroll Translation? Would be important for Navigation.

Thanks for your support

Yes, anonymous users can select the language in the Translations toolbar:

More information about getting started with Translations can be found here: https://help.k15t.com/scroll-translations/latest/get-started-125702642.html.

Currently there's no way to translate the space name itself. You can of course translate page titles of individual pages.

If you would like to have language specific space names, I'd recommend using Scroll Translations in combination with Scroll Versions. You can author and translate your content in a versioned space managed with Scroll Versions and Scroll Translations and publish each language to a separate space. Each space will then have a dedicated language specific space name.

You can find further information about Scroll Versions in our documentation (https://help.k15t.com/scroll-versions), or feel free to have a look at our YouTube channel: https://www.youtube.com/watch?v=ptaP1m1MGvY.

Hope this helps. If you have questions, please let me know.

Thank you so muchRoman (still not able to mention you - always getting an html error :( )

Pretty sure - I'm gonna come back for more information.

No worries, I can still receive notifications as I am watching the thread.

Yes, both apps integrate with each other. The only thing to keep in mind is that anonymous users can't select which version of the documentation they would like to see. This can only be achieved with Scroll Viewport. You can see a live example of Scroll Versions + Scroll Viewport on our own Help Center and Atlassian's Documentation.

I will have a look. That would mean I need Translations, Versions and Viewport to meet my requirements? Puh that's a lot....

Is your idea to make versions for each language and make them chooseable via Viewport? Maybe I would not need Translations for that.... cause each version would just be another language?!

Don't take me too serious at the moment, long day, too much coffee....

You only need Scroll Versions if you would like to have space name in different languages (by the means of publishing). Scroll Viewport is for the ability to anonymous users to select a specific version of your documentation. To achieve your main use-case of having different languages in the same space, Scroll Translations is enough.

If you renew a license on the marketplace (for example, 2nd year), you only pay 50% of the full price since it's a perpetual model: https://www.atlassian.com/licensing/purchase-licensing.

thanks for showing me the light at the end of the tunnel.

Let me get things together:

Am I right here?

Versions — multiple versions of your documentation in a single space.

Viewport — custom view for the Confluence space for reader to consume the content.

Translations — content in different languages in the same space.

One article in different languages in a space (language is defined by user settings?)

When an anonymous users access the space for the first time, the language is determined by a browser language. A user can then choose any language they like. The last selected language will be remembered in a browser cookie.