Welcome Wednesday: What's on the BBQ?

We are now entering that time of year where I start cooking exclusively on the BBQ.  I love being able to be outside while cooking dinner, the fewer number of pots & pans that need to be cleaned up after the meal and the flavor that only a BBQ can add to food.  No, that doesn't mean I only eat meat, I also cook quite a variety of vegetables.  From cobs or corn to baked potatoes and even skewers of peppers and mushrooms.

My question for you all this week, is "What's cooking on the BBQ?"  I'm talking about your ideal meal!

For me, I would be slow roasting pork back ribs and baked potatoes at a low temperature.  Closer to it being finished I would add some cobs of corn left in the husk and dunked in water.

Now that I have said all of that, I think I have my weekend cooking plans laid out!

Let me know what you will be planning in the comments.

Have a great week everybody!

For me it is steaming oysters over the grill on a Saturday afternoon while we are hanging poolside. That is definitely my summer favorite.

Weeknights, I like to use skin-on chicken breasts, lift the skin and slather the breast with olive oil crushed garlic and salt and pepper then pin the the skin back on and give it the same treatment. I then grill on low for fifteen mins face up, another 15 mins face down and a last 15 mins face up.

Oysters?  I may have to try that in the future!  Also, I 100% agree with the coleslaw, not sure how I forgot about that!

@Jimmy Seddon You can find directions online for "Campfire Oysters" but the way I like to do it is put them in a disposable aluminum pan and put in a tiny bit of water to create steam. Let that sit on the grill for long enough that several of the oysters pop open and then they are ready to serve. Great with a drop of Datil pepper sauce and a touch of horseradish.

We live in a town home so we only have a small backyard with high fences and a concrete slab. But we have some "grass" rug (that we used in our RV when we had it) and I surprised my wife with a picknick table and flowers the other day. It is starting to look nice.

We also have a BBQ out there. I did some really nice pork "rolls" the other day. Pre-seasoned from Costco. Chopped up sweet potatoes and cooked them in the oven. Bit of BBQ sause. Turned out really good. But my BBQ skills are pretty slim and so is my BBQ equipment...

You know how to grab my attention @Jimmy Seddon!

I'm not very good at BBQing, but I do enjoy preparing things and helping the better cooks! I have my secret chicken breast recipe that works out perfectly each time.

I can admit that BBQ-cooked veggies are my favorite!

I don't have a picture to share yet - but my next BBQing will be ribs!

Mostly I do hamburgers and hot dogs or steaks.

Hate the work that goes into it, but my favorite is brisket, when it is ready to eat, we don't even sit down to eat, we just stand at the counter and slice and eat. Just realized I don't even have a picture of any of my brisket cooks, lol. Close second is 3-2-1 St Louis ribs. Baked potatoes or corn on the cob, are our usual sides for either of those. 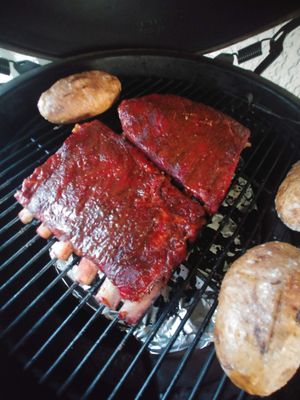 For some of the folks that go back some time this isn't new, but back in 2004 I accidentally got involved in the BBQ World Championship in Germany. I was a participant at a cooking course and we decided to participate in the competition with a couple of volunteers from our group.

The World Championship was not a big success, but an awesome experience. And so a couple of months later we participated with the same folks in the Belgian Championship as well. And guess what - I was part of the team that won the BC fish BBQ that year.

Our dish was a combination of 3 catfish rolls, one with an eggplant caviar, another one with zucchini and red pesto and another one with a black olive tapenade. It was a ridiculous amount of work, but I still remember it as if it was yesterday.

As of then, apart from doing very regular stuff for the kids, I've always loved grilling big pieces of meat or fish and cooking them slowly. Carving them live for the guests after letting them rest for a while ... ahh. Let the summer begin!