It feels like only a short time ago, I saw a promotion on the Online Community for the Atlassian Team Playbook.  I have had a lot of success in the past bringing new Atlassian products or ideas to the teams I work with.   Looking at the Playbook myself, I saw potential to help make the work day easier for team members.  A number of teams were struggling with Agile philosophies and practices, So I shared the link to the Atlassian Playbook with the team leads. Many of the teams found the Playbook very useful.  Looking not only at team health but what plays were available to solve various weaknesses they identified as a part of the Health Monitor. This was a huge success, but my work wasn’t finished. 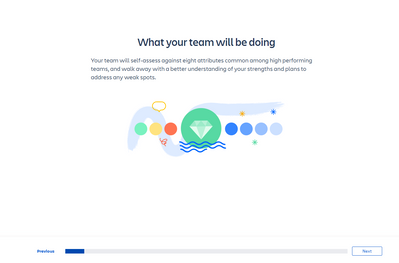 We were having a number of issues with people from various teams outside of the R&D organization not being on the same page.   There was constant confusion about what was included in our releases, when our releases were happening and who the right person or group was to find out the information they were looking for.

I saw the “Stakeholder Communications” play as a potential solution to this issue.  I brought this up to the senior management of R&D and I was asked to lead a session where we would run through the play with all of the R&D leaders.  Following the instructions of the play, I asked all of the leaders to come to the session with a brain-stormed list of who they believed our audiences/stakeholders were. 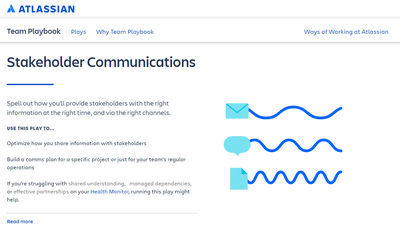 When we started the session, I used a whiteboard to layout the columns and rows as defined in the play.  I had the leaders start listing the Audiences and one thing that became very apparent was that while there were a couple of responses that overlapped, as a group there was a lack of alignment regarding who the list of audiences was.

This was the moment I knew this play had been successful!  Now everyone had a much more accurate picture of who needed to be informed about various activities in R&D.  We continued by listing out the communication methods and the frequency that each audience needed to be informed and we made sure that this was documented in a public place and communicated appropriately.

My manager was tasked with owning the document and making sure that it was reviewed on a regular cadence with the other leaders to ensure it remained accurate.  After this exercise was complete, we saw a significant change in the number of times mis-information that was floating around.  When, someone was unsure about something, they simply consulted the documentation to determine who the proper point(s) of contact were to get the correct information.  This led to better communication and collaboration between teams, and fewer meetings to re-iterate and communicate information that had already been shared. 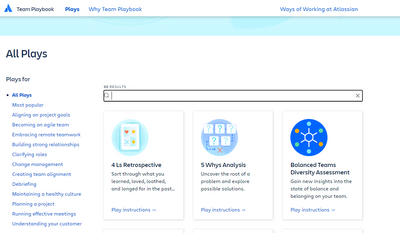 For anyone new to the Atlassian Playbook, it can feel a little overwhelming at first.  There are tons of plays, some of which may or may not be relevant to you.  I simply started by browsing all of the plays and looking for keywords that I felt we were struggling with (In my case “Communication”).  This resulted in filtering the list of plays to a subset of the entire list which was much more manageable to consume.  If you haven’t browsed through the Playbook, I’d recommend you check it out!

@Jimmy Seddon , thanks for sharing your experience, really interesting!

Do you try to make room for more of the work you love?

Most of us are probably pretty familiar with traditional Retrospectives. But we’ve got another variation for you to try – and we think you’ll really like it! It’ll not only help you make room for doi...