Yesterday, I had an issue where I could not open SourceTree - when I would click the shortcut, the blue window with SourceTree logo would pop up, but the app itself would not open. I had the same issue today, so I tried uninstalling it and re-installing the latest version 3.4.3. I got the setup .exe file downloaded, but even that failed to run. It was the same issue with the setup exe - blue window with logo popped up but failed to run. Any guidance on this issue?

Edit: I am getting the below crash message when I try to re-install the latest version. 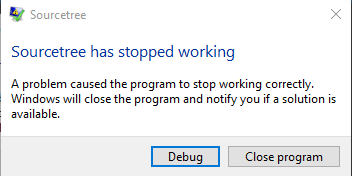 It's been a couple weeks now.... Anyone have any ideas? Is there anything that I should make sure is installed on my machine for SourceTree to run (ex. Java, C++ redistributables, .NET framework)? SourceTree was working fine before so not sure why it would randomly stop working.

After a couple months, the issue is finally resolved. A new version came out, 3.4.4, so I tried installing this one and it actually worked. I can now push 2 months worth of code into source control, thank you Atlassian, you have saved me!