Friday Fun: What's the most memorable gift from Santa in your life? 🎅

Since December has just started, share the gifts you still remember today. They don't have to be the best - they have to be remembered!

Of all the gifts in my life, I remember the animal nightgown the most 😂 I was about 5-6 years old. I always looked for the wardrobe in which my parents hid the gifts before St. Nicholas' Day. Usually, it was on the shelves with towels, which I couldn't reach because I was too short. That year, my mother called me into the living room to ask if I had been a good kid because there was a gentleman with a present 😉 Of course, I was good! I don't know how it happened, but I went back to my room and there was a present under my pillow. How did my mom do it? I was there all the time! I don't know. But mom was always a sorceress ❤️ Then I got the aforementioned animal pajamas. It was my first nightgown. And my mother always slept in a nightgown. Thanks to this gift, I felt like I was almost an adult because I no longer had to sleep in children's pajamas. That's how I explained it back then to my childish mind 😂

I always asked for sweets and a Barbie doll in my letters to Santa. Never for new pajamas 🙈 And it was her that I remember the most.

How do you remember your gifts from your parents?

"A thorium bomb?  Of my very own?  Y'know a kiss on the hand might be quite continental, man.  But tactical thermonuclear weaponry is a guy's best friend" - D.R.

But no, I'm not a "Sheldon Cooper", I never tried to build a nuclear reactor as a kid (tempting as it sounds)

I asked for all sorts of stuff, but oddly, never Lego.  Lego always arrived, because my parents understood me better than I did, but I never asked for it.

There are two that stood out though.

First: I asked for a micro-computer once, and my parents delivered.  In the UK, we suffered the curse of Sinclair, which inflicted the ZX80 and ZX81, and later the "Spectrum" upon us (Not sure if that's a bad thing - it certainly inspired some coding and games that worked brilliantly on utterly dreadful hardware), rather than the massively superior Commodore options that the USA picked up on at the time.

But, my father, a man who is still utterly computer-illiterate (he retired early to avoid having to learn to use email), did a huge amount of research and got me a VIC-20.  Over the next few years, Christmas got me upgrades - a C64, a Miggy, and an Amstrad thingy, but the other gift was a modem, so I could use the internet... many years before "the web" was a thing.

Second: was when "Santa" thought I was old enough, I got a Meccano set.  Santa was my grandfather that Christmas - the box he gave me was one of his first toys, and it was, and still is, superb.

I can't leave it at that.  That's the old stuff.  I could easily rattle off a (boring for everyone else) list of the Lego sets, experiences, life improvements, and just... good... stuff, that my wife has found for me at Christmas.  We've been together for a long time, but she's still not had to go to "well, there is room for a third cat" or "you know you always wanted a puppy"...

Wow! It's an amazing feeling to listen to (or rather read) such fantastic memories!

🙈 I had to check what is a Meccano set because it isn't popular in Poland. Probably I've never seen it in our shops.

As for Lego, your parents knew what was worth attention 😊 Lego also appeared in my letter to Santa a few times, but unfortunately, my parents couldn't afford the original bricks. Fortunately, today I can buy my own sets (the Hogwart castle is my biggest) and I'm very grateful that I can now fulfill my dreams.

@Katarzyna Pawlak _Appsvio_ - I'm jealous of the Hogwarts castle! I so want that, but it is so expensive. I have recently built Hedwig and Fawkes and I have the Hungarian Horntail and the knight bus to build! I'm saving up for Hogwarts castle for sure. If you don't mind me asking, how long did it take you to build it?

For me it was in 1985 when I was 10 years old! All I wanted was the Cabbage Patch Kids twins! I wanted them so badly! At the time they were in this big long rectangle box. When I came out of my bedroom on Christmas morning I was immediately disappointed to not see that large box under the tree with the rest of my gifts. Then I scanned the room and there was the box on the back of the couch and I got so excited! I loved those twins! I changed their names because the ones they came with were awful! I sent the forms via snail mail to the Cabbage Patch Kids company and got new birth certificates. I used my allowance to by a crib for them and I cared for them so much. The funny thing is, when I was young I wanted babies so bad but once I grew up I no longer wanted to have kids and I don't have any. Here's a pic of the exact ones I had. 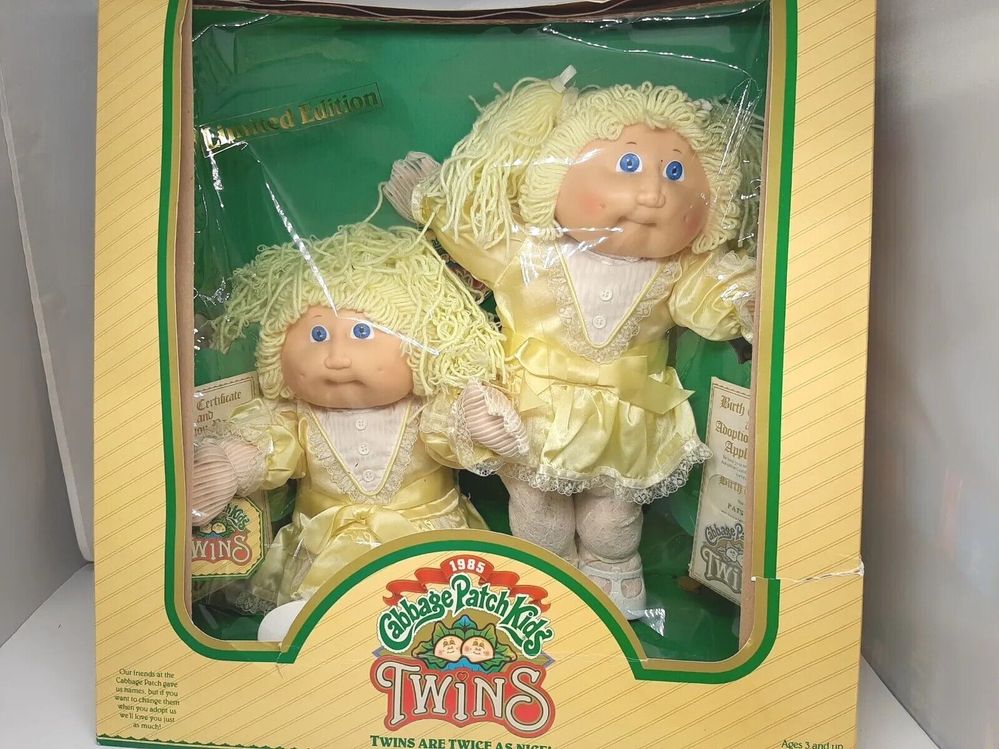 You burned all the child-rearing energy off taking care of the twins! XD

OMG, they look so serious 😱 Definitely it's not Barbie-style!

I've never heard about certifications for dolls. This brand is not known in Poland but I had a very similar doll (only one, not twins, so maybe taking care was easier 😂). I see that this company has a very long tradition and they still sell them, fantastic.

@tsmith - that's funny and may be true!

@Katarzyna Pawlak _Appsvio_ yeah it's a pretty well known thing in the USA.

Are they still selling them ? haha

As a child I watched Mister Roger's Neighborhood every chance I got. I loved the Land of Make Believe and the thing I loved about it the most was the Purple Panda Bear from the planet Purple. I wanted one so very much I put it in every letter to Santa.

One Christmas morning I found a stuffed purple Poodle Dog under the tree with a note from Santa that he searched everywhere but could not find a purple panda bear.

Well into adulthood I relayed that story to my now partner. The very next Christmas I found a purple panda bear under the tree. He had bought a stuffed panda bear toy and spent time dying it purple to fulfill my childhood Christmas wish.

How amazing is that?

Your partner is gorgeous ❤️ The amazing gift and a beautiful story. Thank you for sharing it :)

That is such a sweet story!

Oh boy, I got so many gifts from Santa as a child, I was so spoiled.

I used to collect everything automotive: Matchbox, Majorette, Bburago 1/24 and 1/18 diecast cars, Britains, ...

I'm picking the 255 Computer Command as my granddad owned a Corvette Stingray at the time: 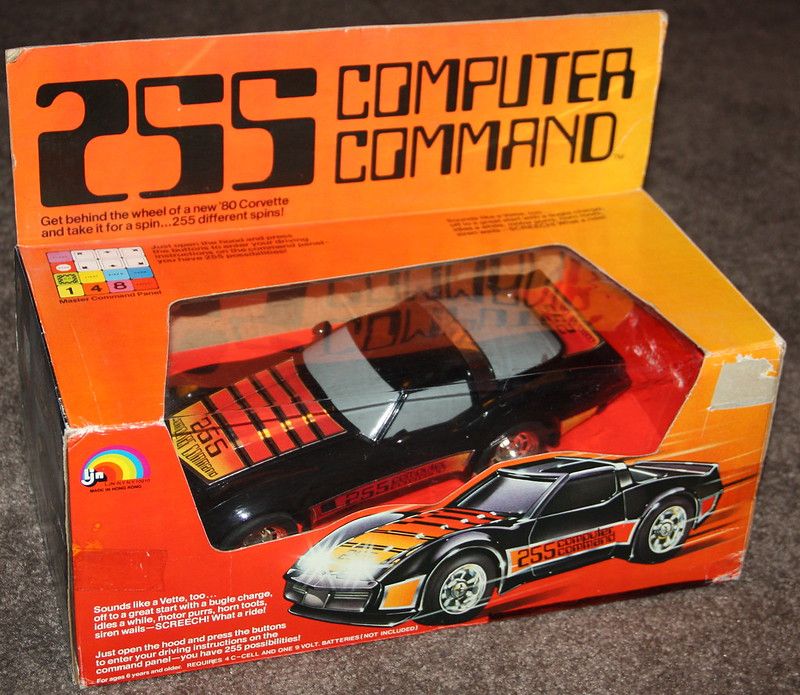