Friday Fun: A Phoenix from the Ashes

In winter, before we bought, we were camping in the area and knew it would be a bad summer – the normally wet and green south east corner of Australia was brown and dry as a chip. Having suffered from 5 years of drought, summer was going to be hot and dry, with no rain in sight. We decided we wouldn’t move into the house proper until summer was over.

It was difficult to leave, but also difficult to get back to the city after new year - fleeing tourists, closed roads and fuel was reserved for the Firies (Firemen). But make it back we did and we walked on hot coals for the next 6 weeks. The 4th Jan 2020 is literally burned in my memory – a scorching hot day, dry, with hot northerly winds. The entire east coast was a declared state of emergency. Thankfully, by late that night, the property was still untouched. But it wasn’t over.

There had been some rain, then on the 1st Feb the fires really did go through our valley. We were pretty sure we had lost our new home. We walked around in a daze not knowing what to do or say.

The Black Summer fires of 2020, as horrific as they were, were not the worst Australia has seen since white settlement. Yes, there was devastating loss, including 33 deaths. But, within months, the burned trees had their fuzzy jumpers of regrowth. Within 6 months it was getting hard to spot exactly where the fires had been. Two years later, as is usual, its a phoenix risen from the ashes.

Our area had low intensity fires for the most part, and didn’t suffer as much as some areas, so we were lucky. But bushfires are an integral part of the Australian landscape. Invasive weeds have been set back and the natives have come back strongly. The tree ferns have been going nuts. We have more animals, frogs and birds than ever, and there are a few less rabbits (a major pest).

Our property has gone from brown and dry when we bought, to the bright green haven we knew it could be. We’ve had nearly 2,000mm of rain in 2021, as compared with around 400mm in 2019. We can breathe easy for a little while. But the fires will happen again, and again, the forest will come back.

What is your phoenix from the ashes story? 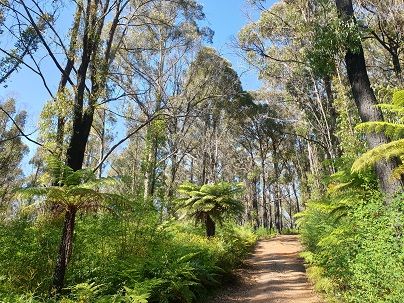 @Linda Milne_Togetha Group_ TBH, I don't think any story I have could complement your story. Thank you for sharing such a private and raw accounting of your personal story, from across oceans I am literally weeping tears of joy for you.

As an avid cyclist and follower of professional cycling I saw the scorched earth pictures from that season's Tour Down Under and Herald Sun Tour, and just seeing the landscape burned and mangled didn't give me the appreciation for how it affected lives of those not just 'passing through' at the time.

Thank you for sharing!

Thanks for your thoughts @Andy Gladstone  it was a tough time for many on the east coast. But, having grown up with bushfires its just a fact of life - I don't look forward to summer the way many people do, and ironically, moved east to try and get away from such things. ¯\_(ツ)_/¯

What was more important is how amazing the forests are and how exciting it is to see them come back, and from such apparently irredeemable devastation. It is incredible how quickly the recovery begins. There was a huge amount of damage done, but it wasn't it the entire east coast, even though it might have seemed that way. Besides I didn't do anything, mother nature did all the work!!

I'm sure others have stories of recovery. And they don't have to have hit the global headlines the way our fires did. 😁👍

Thank you @Linda Milne_Togetha Group_. I recently had a surgical procedure that has me a bit down due to the length of time that i have not been able to be physically active, and the resulting time it will now take to return to my fitness level pre-surgery. But reading your words>

What was more important is how amazing the forests are and how exciting it is to see them come back, and from such apparently irredeemable devastation. It is incredible how quickly the recovery begins. There was a huge amount of damage done...

>gives me renewed hope of getting things turned around and better than ever soon!

Time and caring. Your body knows what to do, even if its not quite as fast as you might like. I am similarly amazed by just how much abuse the human body can take and still bounce back... or even just keep going!

Take it easy and before you know it, two years will have passed!!!

@Linda Milne_Togetha Group_ , this is an awesome reflection on such an incredible experience. Truly one that you will never forget. Thank you for sharing.

Thank you very much for sharing your hard and personal experience, I think that by not having experiences of this type, we are not aware of the terrible consequences that are had of it, we only think of the burned forest or meadows, but we never stop to think in the people who may be behind these tragedies

I think that like everyone else, we have recovered from a global pandemic that has affected us all in some way or another, leaving some mark on our lives

The rest of the world is ahead of us on that one - we've only just started coming out of lockdowns. But, yes, that is a global recovery that most can relate to.

After having struggled with infertility for a few years - on Jan 2020 I welcomed my first son :)

Glad it all worked out well in end!! and Hope keeps us always alive. Thanks for sharing!!

Yes, and the hope came from knowing that the forest will come back. A house doesn't come back, but the forest does.

Thank you sharing this sad but also inspiring story. Nature amazes me every so often.

(Gladly) I haven't experienced something like that in my life. I hope you and your family are well and that you never have to experience this again. 🕊

Thanks for sharing your story and great pics!

@Linda Milne_Togetha Group_ is all I can say is wow, inspiring.   Thanks for sharing.

Its also inspiring being in the forest, seeing the blackened tree trunks, but with new growth coming out of them. Seeing all the green coming out of the black is heart warming - and not just a little bit weird. Knowing that the devastation is not quite as permanent as it first seems makes it a little easier.

What doesn't kill you makes you stronger!

Life has a way of finding a way back, in the most harrowing conditions! It asserts its triumph from the bleakest of situations!

One of my very close friends had recently been diagnosed with very advanced cancer, then she lost both, her only son and husband, to a car accident. We thought she would not recover from the shock. But then a miracle took place!

A little kitten adopted her, yeah the kitten adopted her and not the other way round! They started having "conversations during meal times"! Then my friend had a new visitor an injured owl! And slowly we found her moving back to life as all sorts of big and small creatures found their way to her heart and hearth! Now, she's started visiting us old friends socially, something she completely avoided even a few months ago! Now, we visit her on celebrations of "the adoption days" of her furry, feathered and scaly friends! Our children love it at her huge menagerie of a home!

The icing on the cake is she's on her way to remission from her disease! We couldn't be happier at the news!

@Linda Milne_Togetha Group_ your inspiring piece made me want to share the story! Thanks for sharing!

@ABR  that totally trumps my experience, in every way. Thank you so much for sharing, its so very exciting to hear stories like this. It never ceases to amaze me the resilience that people can find deep inside when everything seems lost. Sometimes nature comes to our rescue, rather than the other way around. You can never tell what might turn the tide. Give your friend my very best. ✨

@Linda Milne_Togetha Group_ Thank you! Will definitely pass-on your wishes to her!