Day ... I don't know exactly which day is today - every day's the same - I think I'm somewhere in week 2

Gosh, this night was weird. Yesterday, I got a call from Ebenezer Scrooge. It's debatable whether he's a fairytale character or not, but he lived in the fairytale land for more than hundred years now. Ebenezer had a green card, the same as I, and he also had to leave, of course because of the royal decree. He went back to London, where he came from originally, and is totally lost and frantic there. Imagine, he didn't see London for nearly 170 years. Nothing's the same and the city is suffering from the plague as well.

We sometimes met at the Prancing Pony Inn for a beer or two, so I know him quite well. I like him, we both are a little bit grumpy, but that's fine. At least for us.

He was looking for his old house in London, but it's gone. There's a big glass palace and a little sign on it "Here lived Ebenezer Scrooge, a generous patron of our city" - that's it. Police officers asked him severely to go home. But where's home in these days for people like us? I invited him to our hut at the North Pole, there's no police around and Santa will not even take notice of him. They are still watching Christmas movies... I can't believe it.

The only thing I asked Ebenezer is to bring some British beer and food. I can't stand these cookies anymore, even British food is better.

But back to last night - I had bad dreams... I usually do not sleep very well here, but this was the worst night in my life. 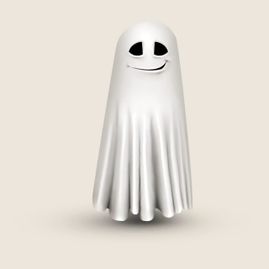 I woke up at one o'clock and realized that I was not alone. And I do not speak of all the other elves I have to share my room with. Another person was there - a small one, ageless, somehow spooky. "Come with me" he said (I'm speaking of him as a 'he', but I'm not really sure), took me by the hand and suddenly we were in the fairyland. I saw myself there, happy, friendly, talking and meeting others, laughing, having fun, going to restaurants, helping the fairytale people with all their problems. I saw my old life, everything I'm missing here on the North Pole.

Everything seems to be so long ago. I implored the ghost to leave me at the fairy land - without success. I yelled and then I woke up in my bed.

A short time later, I just felt asleep again, another ghost appeared and woke me up. Grumpy as I am, I told him to leave me alone but he didn't. He showed me myself, sitting on the computer, working from home, alone and lonely. I saw myself, ranting with almost every fairytale figure.

Then the ghost guided me to the fairytale land again. This time, I saw a lot of people complaining about me: "He's so unkind since he started working from home." or "Next time, I will ask the Atlassian Community. I don't want this elf to vent his anger on me." - these were the friendlier ones...

Suddenly I realized that people do not call me as often as they did during the first days of me working from home and then I woke up.

Slowly but surely, I figured out that these were Ebenezer's ghosts, of course. Who else is showing you the past and the present in such a dreamy way. They had to leave the fairyland with Mr. Scrooge and I'm sure, Ebenezer sent them ahead to the pole and here they are. If I had known that...

I felt asleep and it was not a surprise for me that the third ghost woke me up soon after.

"I know, you're the future one - show me what you have to show me and then let me sleep". And he did.

I saw myself as an old elf. Sitting in the hut at the North Pole at the end of the world watching Christmas movies and eating cookies the whole day long. Nothing else. Not even "working from home". My notebook was full of dust, obviously not used for years.

Then the ghost accompanied me to the fairy land as well, but my house has been replaced by a glass palace and a little sign:

"Here lived the Admin - he was a great supporter and friend until he had to leave forever."

They didn't allow me to come back after the plague. Because I have been so grumpy.
I heard the future people speaking about me, about the moment when I insulted the queen of hearts from my home office so harsh that I was never allowed to come back. Not even after the plague left the globe, which wasn't that long in the end.

Then I woke up, again in my bed. These Ebenezer ghosts are frightening, but they always tell the truth.

Maybe I was a little bit too impolite during the last days. I'll try to be friendly or at least not grumpy, do some workout and anything else which will brighten my mood. Maybe I can convince some of my brothers and sisters to play "Tapestry" - my latest board game - instead of watching Christmas movies.

Finding of the day: If you want to return to your real office someday, don't let the bad mood overwhelm you. Everything in life is only for now and sooner or later every crisis will be over.

Song of the day: Here comes the Sun

Back to the last day