What is the reason do not have the possibility to have a few custom sub-tasks associated with custom tasks in one project?

At this moment I get how to set only:

All tasks could have any type of sub-tasks

That's correct, Jira does not have a function to limit sub-task types by the parent type.

[Edited with working example. Also, the UX is not that bad.]

So, it turns out you can do this in Cloud with any of the add-ons that support Validators that allow for custom Jira Expressions. (Which is I think all of them.)

Basically I added a Custom/Scripted/Build-it-yourself Validator on the Create transition with the following Jira Expression:

With an error message:

Only Tasks can have Sub-tasks. Bugs must have Bug Sub-tasks.

Here's what it looks like if you don't match it up right: 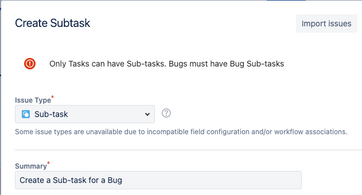 It's easy enough to flip the Issue Type and get it right.

But it is an additional plugin

So if chose plugin, I prefer for this case https://marketplace.atlassian.com/apps/1211968/issue-type-filters-and-security?hosting=server&tab=overview

Ooof, for some reason I was thinking of Jira Cloud. My bad.

Yeah, that add-on looks like it would do exactly what you need.

In my example, it can't be done with two separate Validators, I forgot that unlike Conditions, you can't have "Any". I still think it can be done with a single Jira Expression.

Anyways, apparently it can be done on Server/Data Center with:

But yeah, this can't be done out of the box:

Thank you for your help.
These links are the next level of working with JIRA