I started working at Parker Hannifin as a contractor late in 2017. I was coming into a department that had little to no project governance standards, used this new software called “Jira,” and wanted me to learn the tools and recommend best practices. I noticed a few wrinkles right away: I’m a PMP with extensive Waterfall experience, so the lack of any governance was daunting. That was OK though, because I’m also a Scrum Master and the department was Agile-ish. (More “ish” than Agile, I later learned.) To top it off, I was an MS Project guy through and through.

Finally, after a bit of practice, I was made a site-admin of our Jira instance and made the primary contact for questions on all things Atlassian.

Question: How does one reset, learn a new tool, manage projects, and take over admin duties without jeopardizing one’s contract with a world renown Fortune 500 company?

Answer: Relay on what one knows in the highest detail, right down to one’s very core.

If there is something I know, down to my deepest core, in the highest level of detail it is this: The Princess Bride is the greatest swashbuckling, adventuring, laugh-out-loud funny love story ever made into a movie. And I know the movie by heart.

What does the Princess Bride have to do with Jira you ask? 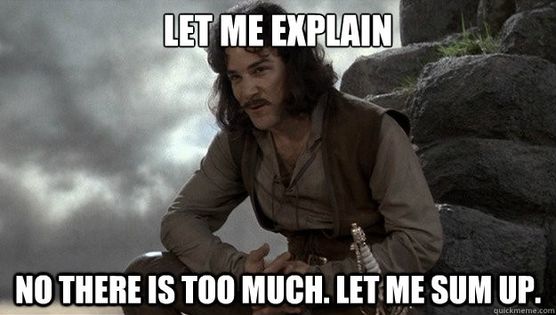 First, I think we can all agree that the secret to a successful Agile project lays in writing good user stories, and a good movie is a good story, right?

Second, new technology can be frightening, even to a seasoned professional. So, whenever I teach someone something new I take the technology out of the equation. Confused about managing sprints in a release? Build Want to learn a new project management tool? Break down a movie into Epics, Stories, Tasks, etc. 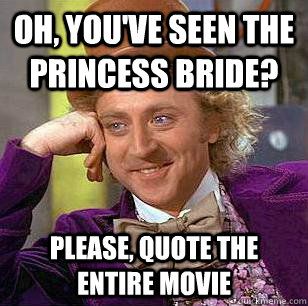 As I watched YouTube tutorials and read through Community posts I also set up a Jira project that followed the adventures of Princess Buttercup, Inigo Montoya, Fezik, and of course, Wesley: The Dred Pirate Roberts.

I jumped right in, setting up the project’s epics, stories and tasks as I worked though the movie script. 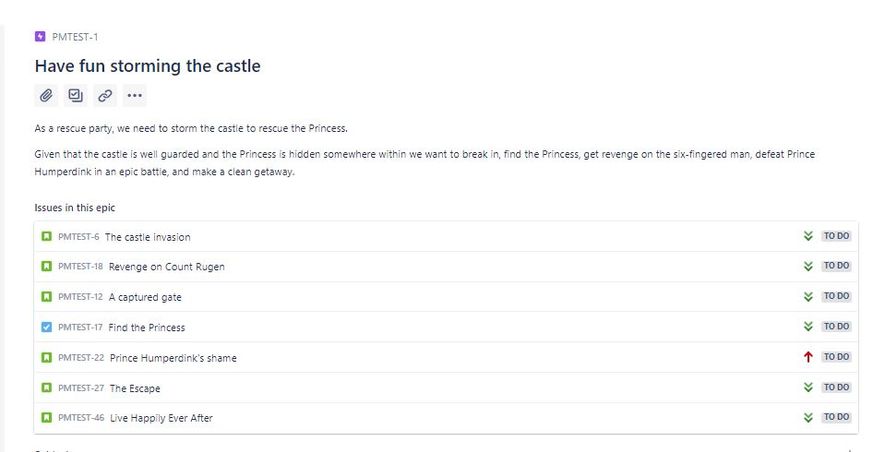 As I set these issues up I found that I needed to add some custom fields, new screens, some workflows, and other stuff. Since I was playing in a sandbox (i.e. a made-up project) I was able to use trial and error.

As I was working on this I was tasked with finding an add-on that would help manage risks and manage at a portfolio level. How you say?

Well, surely there would be risks in an adventure as fraught with danger as rescuing a Princes:

I set up a new Issue Type called “Risk,” added it to the Issue Type Scheme, and started entering risks. 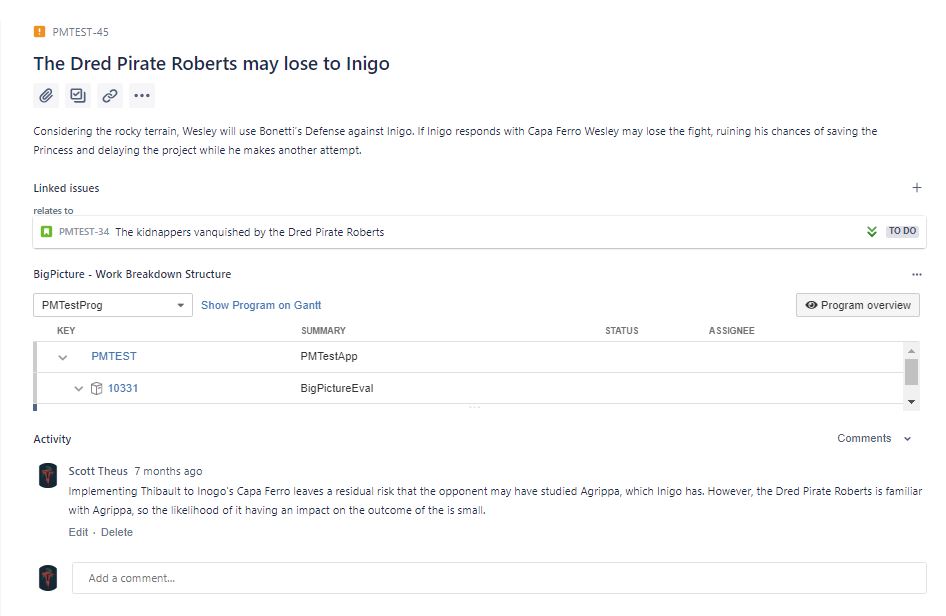 And of course, The Rescue wasn’t the only thing going on…there was a whole other project being run by Prince Humperdinck to consider… 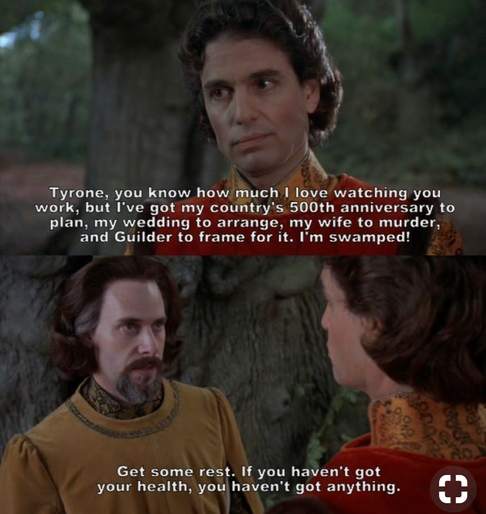 So, I set up another project from his point of view and started creating dependencies between projects, assigning team members, and putting the stories from both viewpoints together in a couple of add-ons.

In short, know that mistakes will be made, and that is okay. By taking the technology out of the equation I was able to think in ways that tasked the creative side of my brain and squeezed in the logic of managing a project without worrying about what I was doing in the tool.

Most of all, not only did I have WAY too much fun doing this, but I learned just how powerful Jira can be when it is set up to optimize a project team’s processes, gained invaluable experience with creating stuff in Jira from scratch (and troubleshooting it when I broke things) and I am now, after just 6 months on the job, an integral part of the team, one of the few Jira experts in the entire company, and a resource for other teams.

Oh…and if I never have to go back to MS Project I will be a happy PM.

@Scott Theus - you did such a great job on this, and from an approach that I never would have considered. Similarly, I was thrown into the flames in my current line of work and had to become the Atlassian product expert and develop the structure as well as the process.

Sometimes I feel like the 'full immersion' experience really is the best way to learn!

This is my favorite part of your article:

In short, know that mistakes will be made, and that is okay. By taking the technology out of the equation I was able to think in ways that tasked the creative side of my brain and squeezed in the logic of managing a project without worrying about what I was doing in the tool.

Good article. Unfortunately just as you get to grips with the layout of the current iteration of JIRA Cloud, you have that inevitable event of going home.

That's when the spanner monkeys come out of the darkness. Screen, links, icons that were all familiar just hours prior, in both location and where they led to have now vanished - or moved to some incomprehensible area behind several more clicks.

I don't think I've used "See the old view" so much before, but I'm so very glad that it exists in the first place. When you have daily tasks at hand using an online system that shifts like the dunes of the Sahara, it does add some frustration to the process of using the software. You go home on Friday night.... what are you going to return to on the Monday morning??!

@Scott Theus such an inconceivably great approach to learning a new tool! Tool ... tool ... if you didn't learn it you'd be a ... *fool*. Oh, and also you killed my father, prepare to ... oh wait, that wasn't you, sorry.

Great job @Scott Theus loved reading this and now I need to go back and re-watch The Princess Bride again!! 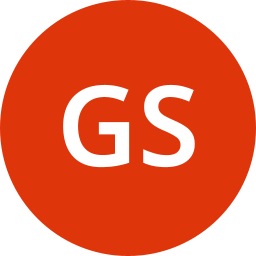 @Scott Theushahaha this is way too cool. Great job @Scott Theus. I am pretty much in same situation and need to learn the tools - Jira at lightning speed. Can you share with me how to add custom fields to an issue/ticket? Basically I want to add a field "Priority" to the a story. I know there is a priority field provided by Jira, however they have Minor, Major, etc. I am looking to add priority as number so my team is clear on which story is priority # 1, 2 and so on

Aisha - What version of JIRA are you running? Keep in mind that it's possible to implement custom Priority Schemes from 7.6 (https://www.atlassian.com/blog/jira-software/jira-software-server-7-6) so you might not require a custom field to implement this.

Awesome writeup of a new admin experience @Scott Theus - chuckled all the way through reading this and have shared with others that are new to Jira admin experience. As another PM, how refreshing to see others also delight in the move away from MSProject. Once people understand the difference between a project reporting system (MSP) vs a project delivery system that delivers continuous project flow reporting (JIRA), it's transformative.

To get to the Custom Fields section, try the following steps. I'm using the Cloud version of Jira:-

I would definitely recommend having a play about with the custom fields. We have created several in the past, retired some, edited others and create new ones on occasion. One field we rely on a lot is used within the grooming sessions that dictate whether the ticket raised requires any further information - or can go ahead to be estimated upon as normal.

@Darren Smith thanks for the steps. I am using server version (thats what I think as I see in page footer of my Jira/Atlassian). I see System Dashboard, however that screen does not have Jira settings. All I see on that page is the list of projects.

@Aisha  - maybe have a try looking at the link below. It appears that the server and Cloud versions are probably quite different in terms of administration....

As relatively new to the Atlassian world I very much enjoyed your rendition of The Princess Bride, Jira style.  I especially like the part about:

This has definitely helped in providing a roadmap on how to approach my new tax practice workflow right as we come to the end of another tax season.  The off season will be full of education and learning how to continuously improve my accounting workflows not only for my own practice but for those of my clients.

Does Atlassian have a partnering model? lol! :Unicorn: