Why are diagrams so important?

Here at //SEIBERT/MEDIA, we believe that visual communication is the best way to present information. We use draw.io to not only create diagrams but also interactive process flows, infographics and custom Confluence headers. In the next couple of articles, we will show you how to create process flows, venn diagrams, infographics and interactive diagrams. First we have to understand what makes diagrams and visual information so important.

Why are diagrams so important?

The majority of people are visual learners. Graphics allow for a  more impactful experience when compared with text heavy content. With the ever increasing amount of information we are exposed to today, we need a better way to absorb and understand it. This is where visuals come in.

For example, what is easier to understand?

the system of government as defined in the Constitution which is based on the separation of powers among three branches: the executive, the legislative and the judicial. This system provides a series of checks and balances because each branch is able to limit the power of the others. The executive branch consists of the President and Vice-President, based in the White House in Washington, DC, and government departments and agencies. The President can approve or stop laws proposed by Congress, appoints senior officials, such as heads of government departments and federal judges, and is also Commander-in-Chief of the military forces. There are 15 government departments, the heads of which make up the Cabinet which meets regularly to discuss current affairs and advise the President. The legislative branch is the Congress which is made up of the two houses, the Senate and the House of Representatives which both meet in the Capitol Building in Washington, DC. The main job of Congress is to make laws, but its other responsibilities include establishing federal courts, setting taxes and, if necessary, declaring war. The President and members of Congress are chosen in separate elections. The Senate has 100 members, two from each state, both of whom represent the whole state and are elected for six years. The House of Representatives has 435 members, who are elected every two years. The number of members from each state depends on the population of the state, with larger states divided into districts, each with one representative. The judicial branch of government has three levels: the Supreme Court, 13 courts of appeal and many federal district courts. The Supreme Court has nine members, called justices who are chosen by the President and headed by the Chief Justice. The Supreme Court has the power to influence the law through a process called judicial review. 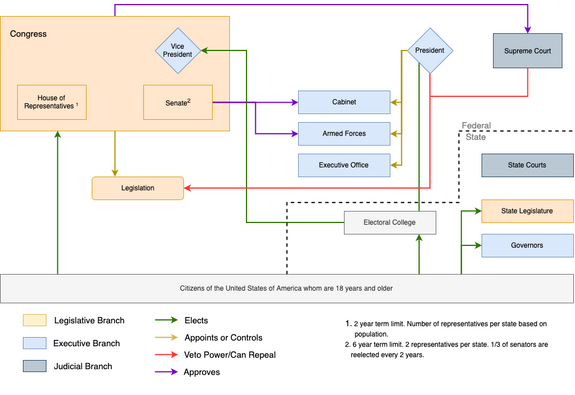 Diagramming is for everyone

Companies need all of their internal communication to be developed and maintained in their intranet and not stored on local computers. This includes diagrams, which can be developed and edited at any time, which are audit-proof and traceable with the full range of tools and functionality.

Tools like draw.io for Confluence offer a powerful and easy-to-use solution.  Everyone in an organization can take advantage of diagramming, both for development of ideas and the presentation of information in a concise, memorable and clear way.

How do you use visuals in Confluence?