📊 The origin of Dashboard Hub: Atlasboard 📊 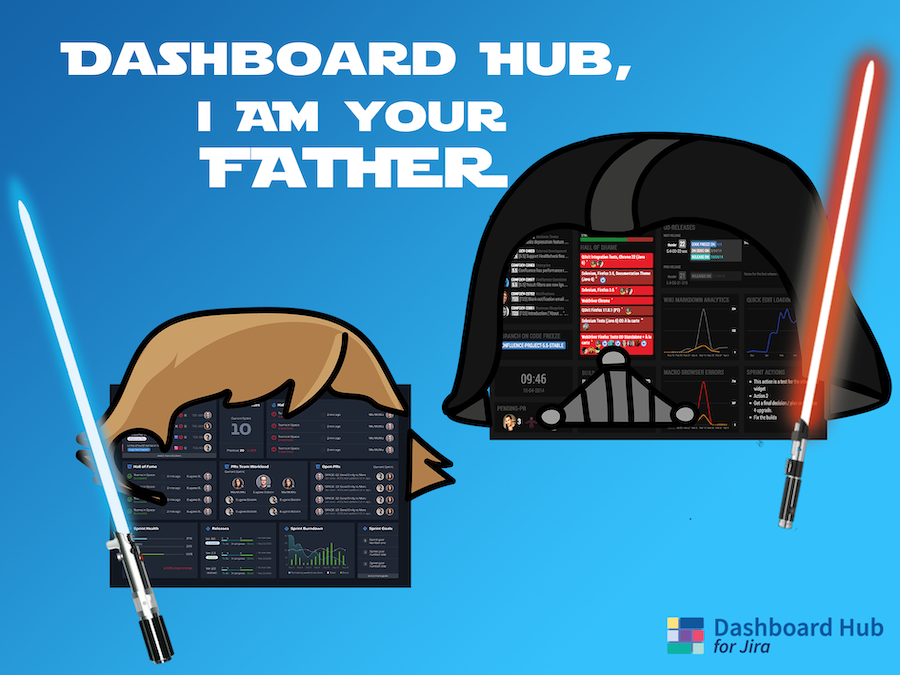 First of all, I'm going to introduce myself. My name is Gorka, I work as product manager in Appfire. Although this is my first public article in the community, I've been around since 2013. I started with a small startup called Keinoby, then with Comalatech and last year we created RoninPixels. If you want to know why I'm in Appfire now... Read this!

This article is based on the interview that took place the 7th of September of this year Iván Loire. Iván worked for Atlassian more than 6,5 years as software developer in Confluence and Trello mainly. One of the first Spaniards who started to work in Atlassian in 2012 in the Sydney office.

Every research, idea or product has a foundation, an inspiration or as the famous metaphor reveals "Standing on the shoulders of giants" to advance based on previous works. Dashboard Hub is no different, let us show you what inspired us to work on the amazing World of charts, metrics, reports and dashboards.

Atlasboard: Simple and beautiful wallboards for everyone

William Archinal and Chris Kiehl took part in a Ship It day (an internal hackathon in Atlassian where employees have 24 hours to work on projects) in 2013, and delivered the first version of Atlasboard (you can see the first commit here !). In less than 24 hours Atlasboard was born! Barely a week after, Iván heard about this project during an internal presentation "A dashboard framework written in NodeJS". He found this project particularly interesting, he could improve the way his team worked and at the same time learn more about NodeJS, it was a no-brainer. Iván became the internal ambassador of the project. 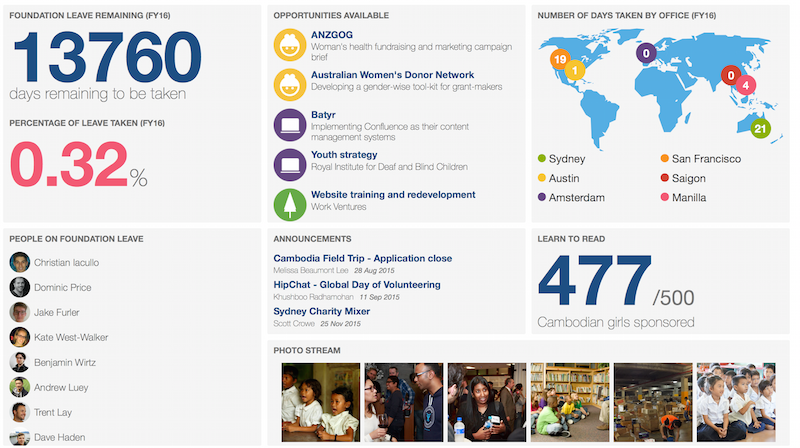 Technically, the project was in an early stage, so Iván started to contribute non-stop during more than two years. The surprise came when internal teams started to use it in offices around the World: Sydney, Vietnam, Austin, San Francisco... You could see wallboards in screens when you walked in those offices, and employees could access information really quick. Relevant information at a glance in big screens in offices! It got traction not only within Atlassian, but also externally (see the #atlasboard in Twitter). Anyone with technical knowledge could implement their own "widgets" and specific dashboards for their teams. Thus, teams created information radiators and employees, users or even customers could immediately know the status of a project, product or builds.

If you feel like creating your own Atlasboard, Iván still has some tutorials on Youtube, like Atlasboard - creating the first widget and job. Remember that you'll need a technical background, what was not an issue at Atlassian offices. Atlasboard, wallboards for everyone :)

What problems did it solve?

Even companies outside Atlassian started to use it in their own offices, but why? what problems was it solving? "At that time, in the Confluence team we had between 50 and 100 builds, and when one of those builds failed, it was a problem for the whole team, so we needed a quick way to put that in front of everyone" mentions Iván. "I reckon that being physically in an office is not the same as being working completely remote, but I guess that Slack and having the dashboard opened (in a tablet or external screen) could help to replicate that context."

Then, they started to use widgets to easily see the workload of their colleagues by number of assigned pull requests, or the (in)famous Hall of Shame (and its benign counterpart Hall of Fame). 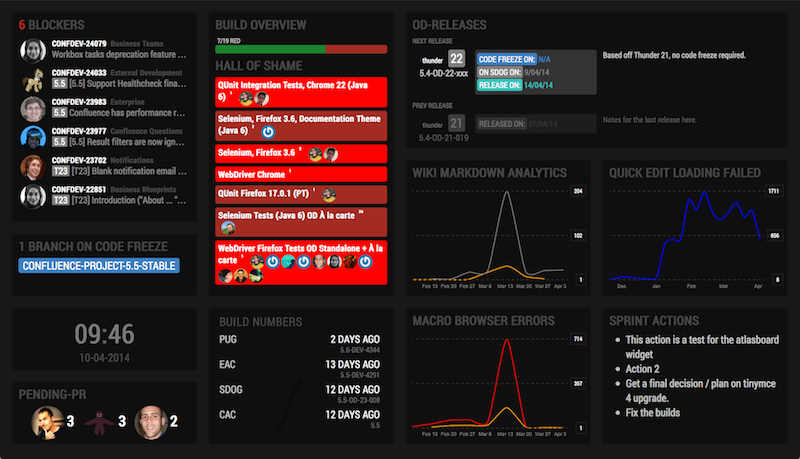 On the other hand, teams like support rapidly got hooked on it, because it was a way to have the queues at a quick glance, together with the regional segmentation of the requests. Although some teams started to use their own dashboard solutions, which was good, because this "competition" helped improve both solutions, more people contributing and getting ideas from the others.

What happened with it?

A question that many people may be thinking is... what happened with Atlasboard? Why it didn’t continue? Well, in Atlassian there is a culture of collaboration and contribution foster by the very same company, and that's why there are still people providing some updates (security patches and maintenance commits mainly). But the initial momentum was lost, in part, when Iván stop being the de facto ambassador. For professional and personal reasons, he moved back to Europe and nobody took over the project. 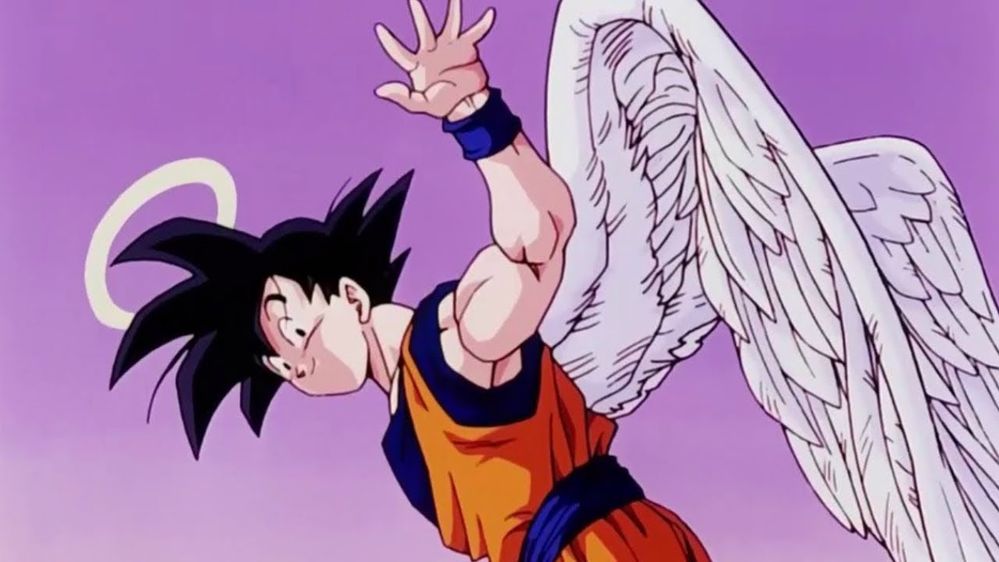 Iván Loire’s opinion on Dashboard Hub, the next era 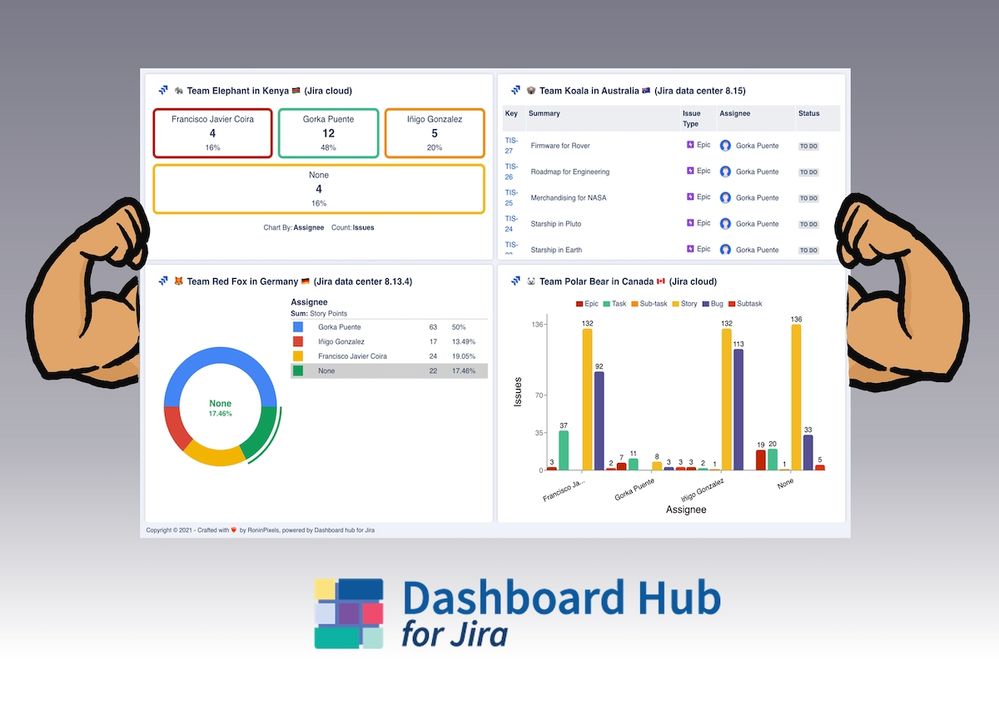 After working on Atlasboard for years, Iván cultivated an attraction for visualizations and ways to communicate valuable information, and dashboards as the way to express and transmit it. He thinks that one of the keys to really provide value to the audience is the usability of the gadgets. Each piece of information requires a visual metaphor, a specific layout, a palette of colors to be really meaningful and appealing. And he saw in some gadgets of Dashboard Hub that set of characteristics, although he also admits not being a hard user of the app (yet).

The potential and the promise that Dashboard Hub does to its users is growing every day, and we'll not stop until Iván become our top fan. We'll keep on provoking him with our new gadgets

If you want discuss with us about Dashboard Hub, challenge our metrics and visualizations, don't be shy and contact us 😉  Your experience is our learning, add to the awesome!

P.S.: Dashboard Hub has “Hall of Shame” as one of its dozens of gadgets. You better get ready 😼

If you want to leave a review we would be thrilled to read it! You can leave it on the Marketplace or G2.

this is such a inspiring, evolutionary road with the product and your team too. many thanks for sharing !

Hey @Tuncay Senturk ! It's been fun doing this interview with Iván, really happy for being able to share this story