Interview With an Expert: How BlueCat Networks Uses Structure for Jira to Tame Fast-Scaling Work 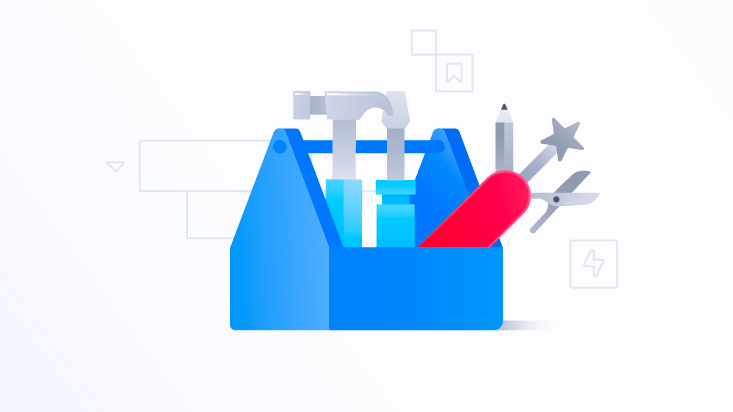 One company's simple rule: Always look for solutions that are flexible enough to suit how you already work.

A few years ago, BlueCat Networks' project management process was fraying at the seams. Their tooling was a combination of spreadsheets and out-of-the-box Jira, and that had worked well back when the Toronto-based software company had only two or three teams in the mix — but now, BlueCat was growing. As its work increased in complexity, users couldn't see their work clearly in the blizzard of epics on their screens, and their spreadsheet data was out of date nearly as soon as it was exported.

BlueCat needed to create a single system that kept everyone in sync and made work easier to parse. Clearly, the next step was to find useful apps on the marketplace that could build off their Jira setup and help create a scalable system.

But when you launch a search like that, it's important to keep one thing in mind, says @Kelly Arrey, BlueCat's Engineering Operations Manager. Don't just look for a great app; look for one that maps to your existing workflow and culture. Otherwise, you're just adding friction to your organization.

"If your tool maps to your process in a straightforward way, your users don't need to stick Post-it notes all over their monitors to remind them how to navigate it — at each point, the next step is clear. When it's easy to use, people will use it."  Kelly Arrey, BlueCat

BlueCat landed on Structure for Jira as its primary way to efficiently track and understand their efforts clearly as they scaled up. Here's how the company, which now has a 130-person dev team, organizes its work in Jira with the help of Structure.

Organize the work to match your team's preferences

If your work isn't organized in manageable pieces, and in a way that is somewhat intuitive for your team, you'll constantly miss important data and your teams will struggle to coordinate.

BlueCat wanted to organize hierarchies that went above the standard Jira epic. Structure allows for largely open-ended construction of hierarchies, so Bluecat could organize their hierarchies to suit their preferences. Here's what they went with:

BlueCat could zoom in and out of its hierarchies — drilling down to see stories, and then back up for high-level feature views. Everyone can see their work in its proper context, in as much or as little detail as they need. 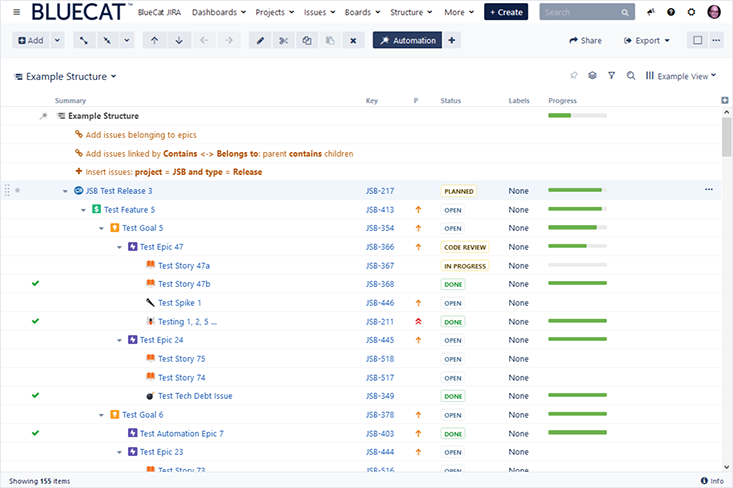 BlueCat is able to visualize its preferred issue hierarchy with a few simple business rules.

With Structure, Arrey's team builds hierarchies of issues, called "structures," and populates them using the app's automation feature. That feature allows the users to define special rules — called generators — that become the basis for these hierarchies

BlueCat uses an Insert generator to pull in the root-level issue and they add Extend generators — which follow issue links, epic links, and sub-task links — to build out the tree from the roots.

For example, BlueCat uses a custom Jira issue link called "contains < > belongs to" to create the desired hierarchy. If someone updates the issue links, the structure updates in response. Furthermore, as new “releases,” “features,” “goals,” etc., that fit the JQL criteria are created elsewhere in Jira, they are automatically pulled into the structure.

"That's very powerful — our program managers live and die by this," Arrey says.

De-clutter hierarchies to keep users focused on the right tasks

Individual BlueCat users can take advantage of a feature called Transformations to re-organize their hierarchies — without changing the views of other users sharing the structure — to see individual tasks in a variety of contexts that can help them ensure everything is accounted for.

These allow users to easily see the issues that matter to them without affecting anyone else's view. 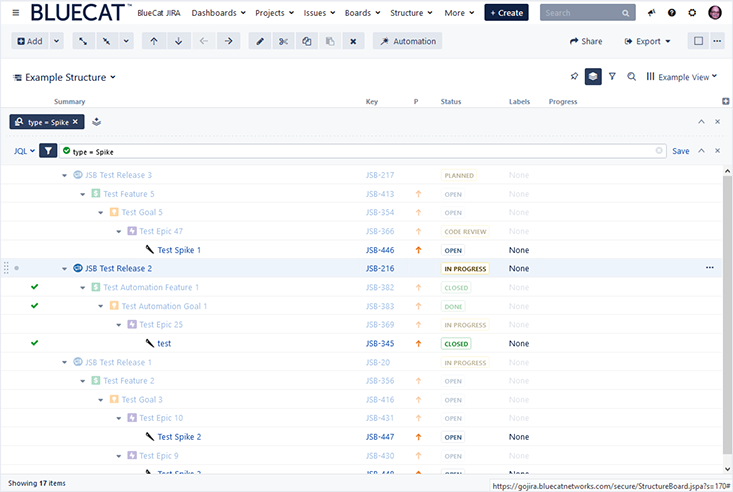 BlueCat uses Transformations to narrow the focus of their structures for a particular topic or team.

BlueCat uses a few types of Transformations. Select an epic together with the pin Transformation, and you zoom in on specific parts of the structure. For example, selected epics — and their parents and children — will be highlighted while everything above and below will be grayed out or disappear.

Other Transformations create different views that allow users to see their work in whatever context they need.

Adapting as your workflow evolves

Arrey wanted to construct a suite of tools that mapped to BlueCat's workflows and processes — and in part, that meant creating a system that could change as necessary.

"Our development process continues to evolve. At any given time, we may update it to suit our needs," Arrey says. "Depending on where we see problems, we might add a step here or there — a code review step, or a code deployment phase after we started doing software as a service." They need tools that are flexible enough to allow for adaptations in the process.

Getting to the next level

The process and tools BlueCat had used as a younger, smaller company had to change. It was awkward to sync up spreadsheets and Jira, and made the work difficult to track.

But instead of looking for a revolution that forced bigger workflow upheaval on the company, Arrey looked for ways to support BlueCat's process — as it existed in that moment, as well as the ways in which it was likely to evolve. Using Structure for Jira, they laid out the views that they wanted, automated actions to track tasks, and gave themselves space to change their process as needed.

To get more information on BlueCat's experience, check out Kelly’s recent presentation on the topic or find your local Atlassian Solution Partner with expertise in this area. You can also head over to the Atlassian Marketplace to learn more about Structure for Jira.

BlueCat began their Jira (and Structure) journey with the server edition of those products. Like many Atlassian on-prem customers, they recently embarked on a new journey — to Atlassian Cloud.

Thank you for sharing

Strongly agree with @Kelly Arrey's statement. I am convinced of this every day and continue to use Structure to meet the needs of teams.

I add your presentation to my playlist.

@Dave Rosenlund _Tempo_ - Can't believe I never commented on this! Yes, it's a necropost, but it's for something I love (Structure, and simplicity).

Q: How many times have I watched someone use Structure (or plain vanilla Jira) and see them never employing any quick filters or Transformations?

A: Enough times that I shared this article on LinkedIn. 🙃