How to simplify creating release notes from Jira!

Today, release notes in development are a must: you need to track what changed and in which version, the features that were introduced and the bugs that were fixed. Additionally, they help you figure out how fast you can release, so that you stay true to your development plan and the needs of your customers.

In this article, we will introduce a few practical ways of documenting your release notes and how to make it as simple and effortless as possible.

What are release notes and how can they help me? 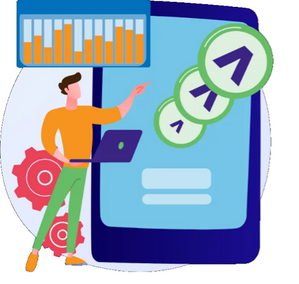 It’s clear that without release notes, nobody would know what to expect. This becomes a problem once more and more releases get shipped.

First, where will you record the information (email or Confluence)? If your Jira is connected to Confluence, the decision is easy: use a space dedicated to release management. To get the most out of the tool, create a release template as a page tree first.

The uppermost page would be a summary, containing the start and end date of the version, the responsible teams and stakeholders. Underneath it, you would create pages covering different parts of release management – not only release notes, but also the list of issues included, results of tests, a roadmap, and so forth. 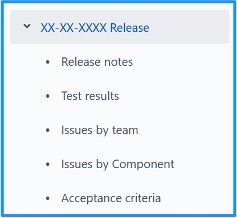 Once this structure is created, you could then use Confluence’s native Copy page tree capabilities (on Cloud) or one of the many apps with the same functionality (on Server/DC) to create a tree for the version you are currently working with. Then, you’d add the name of your release. 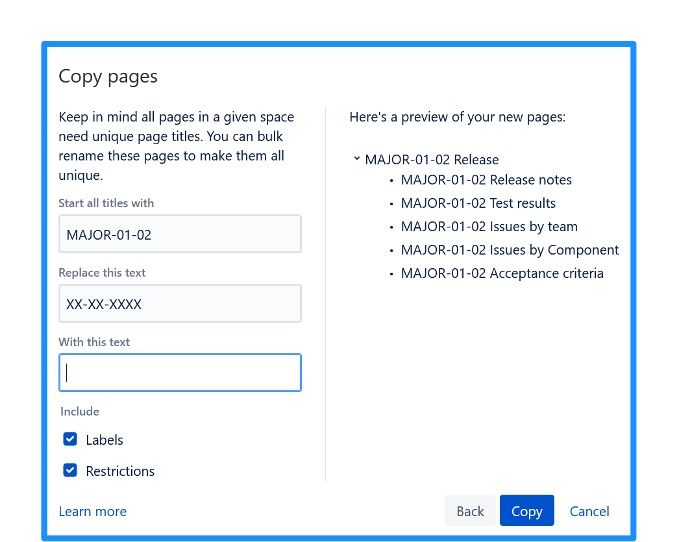 By this point, the page tree would be ready and you could start filling it out.

Thing is, many release notes are omitted because creating them properly takes the necessary time and effort many release managers can’t (or don’t want to) afford. Fortunately, there’s a way to make the creation automatic with minimum effort needed – with the Automated Release Notes for Jira app.

This app was created for two reasons: to minimize the amount of time it takes to create release notes and provide custom information tailored for different stakeholders. Let’s see how the add-on takes care of this.

The first word in the app’s name is “Automated”: it only needs a one-time configuration from the user, saving many hours of work later. In the add-on, you can make rules that specify when to generate the release notes.

You can set up a custom interval (often, “Version release” is used), set the rule to be triggered manually, or use a webhook. The last option comes in handy especially when using external CI/CD tools like Jenkins or Bamboo.

Generate release notes in any format

You can also customize the format of the release notes – put them on a confluence page, send them in a regular e-mail, create an HTML or a JSON file, or print a PDF. Several templates are included by default, and you can modify them as you see fit. 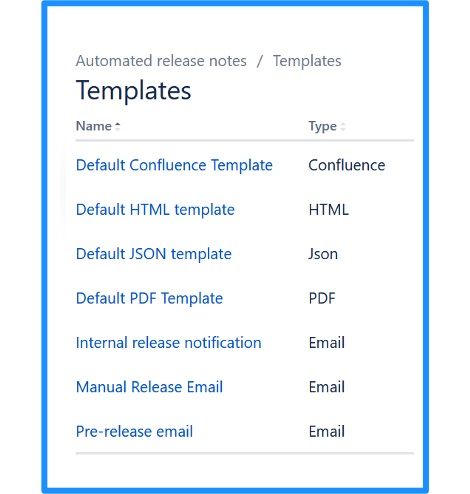 Once you’ve set up a rule specifying when the release notes should be created and chosen the right format, the last step is to specify where do you want to publish them. We already mentioned Confluence, but ARN also supports cloud storage systems like Dropbox or Box or text messaging services like Teams or Slack. Or you can simply send the release notes via e-mail to custom recipients.

This is especially useful if you want different groups of users to receive a different set of release notes – as mentioned, managers, customers, and developers may have distinct expectations of what they want to see. 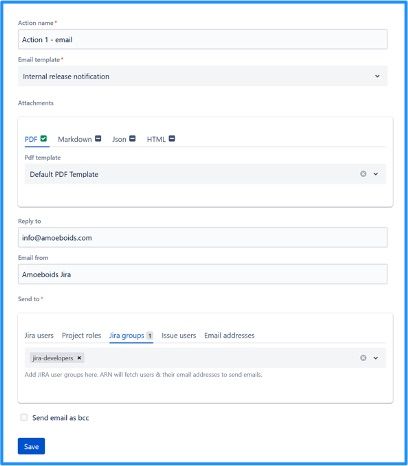 What this means is that you can, for example:

Release notes play a pivotal role in software development, as they keep everyone in the know. However, they are often skipped, as they take time and effort to get them right. Using Confluence (and connecting it to relevant Jira projects) helps, as you can create a template and re-use it with each release.

However, the Automated Release Notes for Jira app takes this to a whole new level: using Jira’s native JQL filtering, you can automatically generate and send release notes tailored for any stakeholder, published only into relevant channels. This makes building a proper documentation, creating a better customer experience and keeping all stakeholders in the loop about changes a breeze, shortening the update cycles in the process.