Simple scenarios on how an application should behave from the standpoint of the end user is the goal here. Free and open source BDD testing frameworks like RSPEC, Cucumber, and Specflow aim to fulfil the automation requirements that many agile development organisations have. It enables teams to deliver regular, dependable releases of functional software that matches the organization’s needs while necessitating some maintenance effort and consistency.

Watch Video here to know how to implement BDD in test management.

The strategy is to keep each alteration small and iterate quickly, moving back up a level whenever more information is required. You added something valuable to your system every time you automate and implement a new example, and you’re ready to respond to feedback.

Some Popular BDD tools to create BDD tests are-

Collaboration: Involvement of all stakeholders from the start and throughout the process fosters good communication and participation.

User-centric Approach: BDD prioritises the customer’s vision. The user’s perspective on how the product should behave is BDD’s emphasis. This user centricity eliminates all “what-ifs”, resulting in a shorter development life cycle and timely delivery of products. 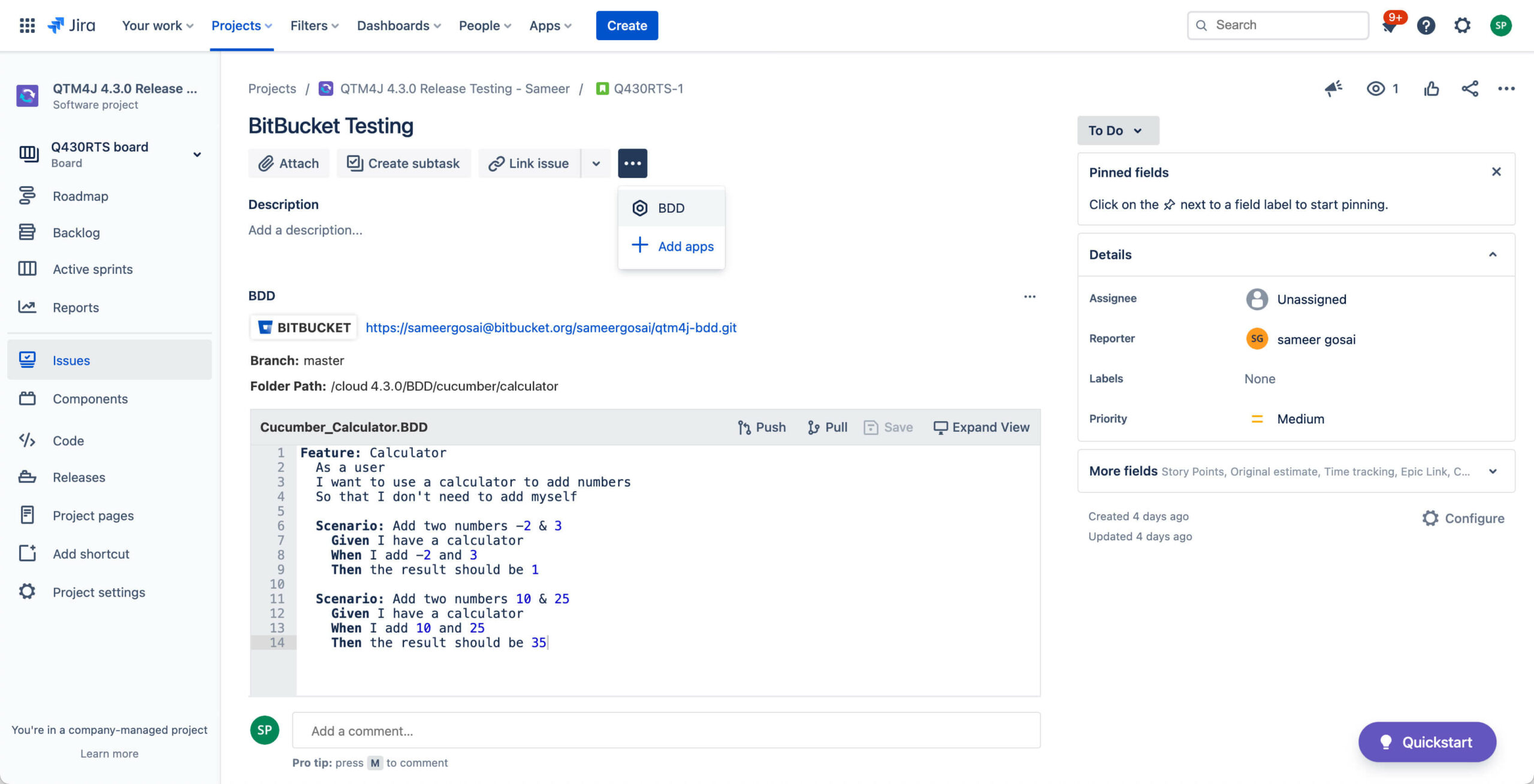 Features of BDD in QTM4J

After enabling QTM4J in a Jira user story, there will 2 sections in the BDD panel: BDD and Test/Acceptance Criteria.

QMetry supports Bitbucket, GitLab, and GitHub as version control systems too in QTM4J.

BDD enables your complete team (including non-technical members) to participate in the development and testing of your software. Overall, BDD is an excellent framework for creating the right product in the right way. Organizations use BDD (Behavior-driven Development) approaches to ensure that product quality is consistently maintained. BDD scenarios bring together the development and testing teams to work toward a single goal. Using the built-in Gherkin editor in QMetry requirements, teams adopting BDD may publish, save, and sync features files directly to/from Version Control Systems (VCS) including SVN, Git, and BitBucket.

The test run results are automatically captured in QMetry once the automation team has translated the specified usage cases into tests. These findings can then be analysed in QMetry, allowing developers to create and provide the functionality as planned. In the Requirements module, QMetry additionally includes a Gherkin editor, which assists the automation team in writing BDD code from the Requirement Test Scenarios.

Want to try QTM4J for your enterprise as well?