7 gadgets for a powerful Scrum dashboard in Jira

Scrum is one of the most popular agile frameworks for software development. Tracking a Scrum project in an effective way is an important task of every Scrum Master or Product Owner. Identifying and then making visible the right metrics needed not only by the team but also by management or other project shareholders can be difficult. In this post we present a list of gadgets that can be used to build a powerful dashboard in Jira for showing the essential metrics, numbers and charts for an ongoing Scrum project. 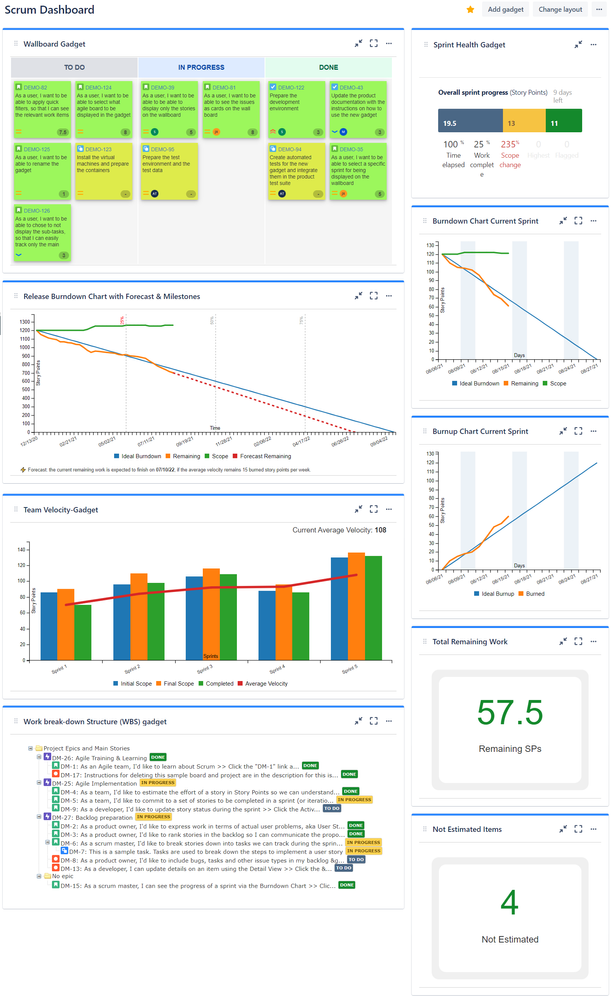 But why putting all these on a dashboard and not using Jira reports, for instance? Well, dashboards in Jira are very powerful. They are fully configurable and you have a lot of gadgets to choose from (some of them are Jira native gadgets while some others can be added by installing Jira apps/plug-ins). So you can build the dashboard based on your needs and you will have all the metrics & charts centralized in on place. Then, you could share it with your team members or to use it as an “information radiator” by displaying it on big monitors or TV screens in the open space.

Let’s see what these awesome gadgets are.

Team Wallboard Gadget – Displays the team task board. On this gadget you can see the items from the current sprint along with their status and assignee. It gives you the overall picture of the sprint contents. It’s useful to look at this gadget during your daily Scrum and to point to the specific items during the meeting.

It is a gadget offered by Great Gadgets app for Jira. It uses colored cards to display the issue based on their hierarchy: green for stories and tasks, yellow for sub-tasks and purple for epics.

Alternatively, you could use the Agile Wallboard Gadget of Jira but it might no longer be available on Jira Cloud.

Sprint Health Gadget – Shows the overall status of the sprint. How much work was done, time elapsed and sprint scope change. 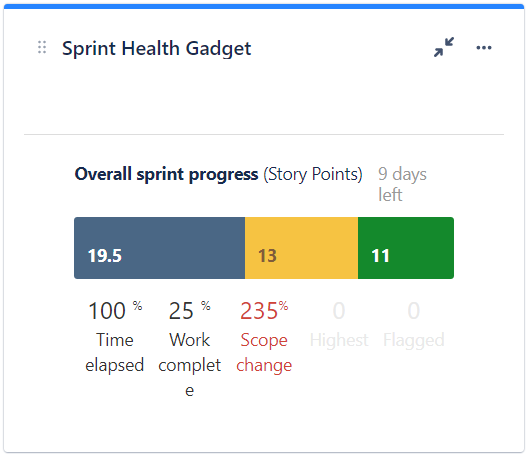 It can be also configured to display the members of the Scrum team. This is a Jira native gadget.

Sprint Burndown / Burnup Chart Gadget – displays the burndown or burnup chart for your current sprint, which helps you see if the sprint is on track or not. 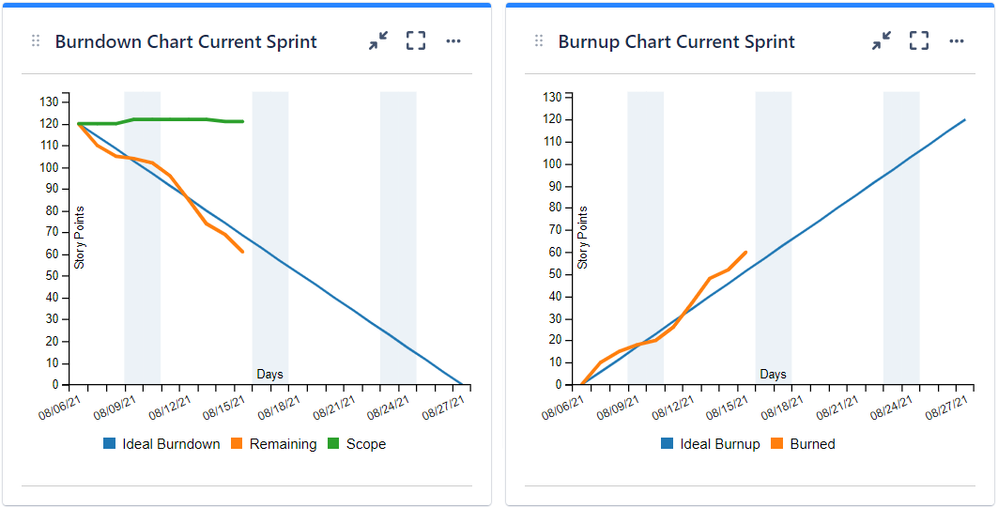 This gadget is offered by Great Gadgets app for Jira. You can configure it as burndown and/or burnup and you can also choose to display the Scope line. In addition, the chart can be generated by Story Points, Original Time Estimate, Time Remaining & Time Spent, Issue Count or by any other numerical custom field and, optionally, you can choose to include the sub-tasks in the calculation.

Release Burndown / Burnup Chart Gadget with Forecast & Milestones – displays the burndown or burnup chart for the entire release, which helps you to see if the project is on track or not. In addition, it can do a prediction (forecast) about the release ETA based on the current or expected team velocity. Optionally, you can choose to display the milestones of the release, like for example at 25%, 50%, 75% of the release timeframe. A past milestone will be displayed in red color, if the Remaining work at that time was higher than Ideal Burndown, or in green color if it was lower, thus indicating if the milestone was reached or not. 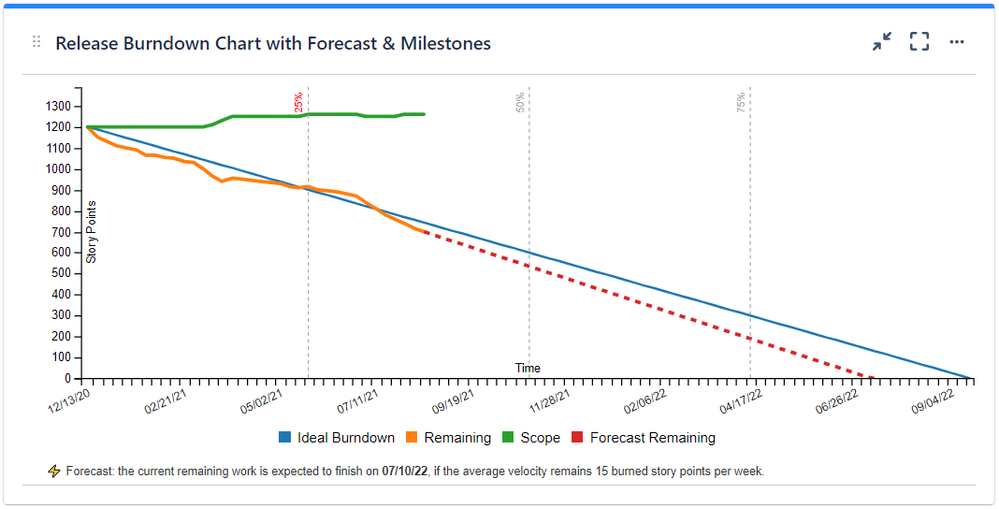 This gadget is offered by Great Gadgets app for Jira. You can configure it as burndown and/or burnup and you can also choose to display the Scope line. In addition, the chart can be generated by Story Points, Original Time Estimate, Time Remaining & Time Spent, Issue Count or by any other numerical custom field and, optionally, you can choose to include the sub-tasks in the calculation. The forecast can be determined either by the automatically calculated current team velocity or by a fixed manually-entered expected velocity.

This gadget is based on a Jira issue filter, which means that you can fully control what issues to be tracked in the chart. You can use this gadget to display cross-team or cross-projects burndown/burnup charts.

Team Velocity Gadget – Shows how the team performs along the time, from a sprint to another. How much work was committed, how much was completed and the average velocity. The team needs to know its current velocity when doing to planning and the commitment for the next sprints. Also, the gadget helps you determine if the team tends to over-commit. 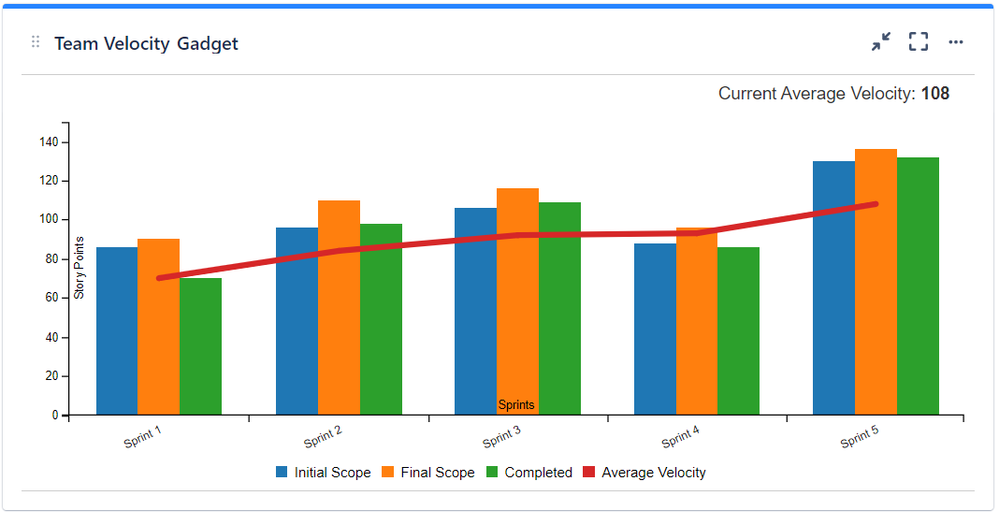 This gadget is offered by Great Gadgets app for Jira. It can be configured to calculate the velocity by Story Points, Original Time Estimate, Issue Count or by any other numerical custom field. It allows including sub-tasks in the calculation.

Issue Formula Gadget – shows the result of a math formula (like COUNT, SUM, AVERAGE, MAX, etc) applied against the field of the issues from specified filter. For example, you can display the number of not estimated backlog items, or the sum remaining story points.

Work Break-down Structure (WBS) – this gadget displays the issues from a filter in a hierarchical form of Epics > Stories > Sub-Tasks along with their current status. You can use this gadget to have an overview over specific epics or over the entire project and to quickly determine what items are still open. It can also displays the initiatives defined in Advanced Roadmaps for Jira (formerly Portfolio) on top of epics. 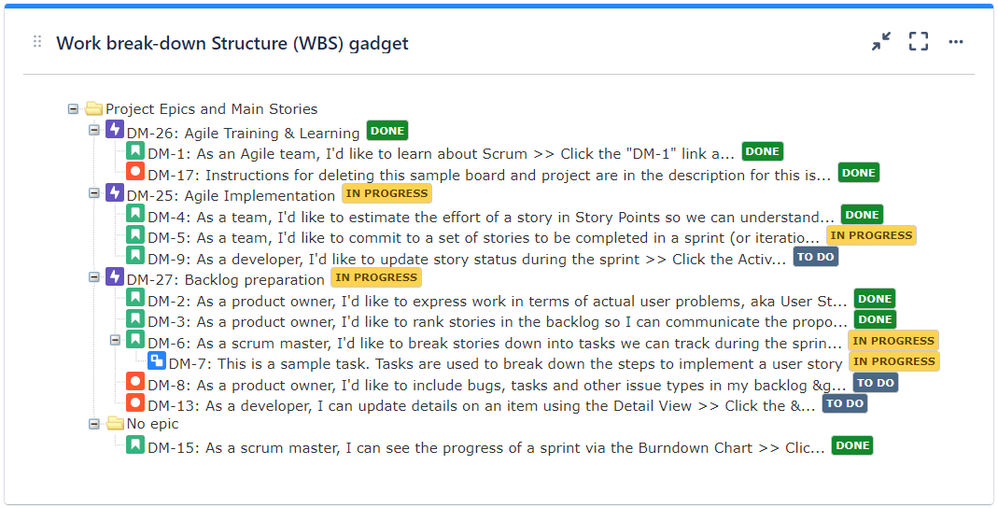 In conclusion,  by using a combination of the Jira native gadgets and the gadgets offered by Great Gadgets app you can build an effective and powerful dashboard for tracking your Scrum project in an effective way. Great Gadgets app by StonikByte - an Atlassian Gold Marketplace Partner - is available for both Jira Server and Jira Cloud.