I'm trying to use BigPicture for to plan at a high-level if the project is deliverable.

I have a bunch of Jira tickets raised, organised by Epics.

I was thinking to use Artificial Tasks, as well as Fix Versions that I prefer, because they get synchronized on the Jira ticket itself.

I have the following Synchronisers on:

The Automatic Task Structure is configured in the order of Project, Epic, Version, component, subtask.

The problem is that when I update the Version and add/remove items, 'Re-synch' option doesn't pick up the changes. Moreover, when i added more features into the Fix Version, the dates of the release got randomly reset.

When i created Jira tasks, they had no estimate. I think start and end date were populated automatically. I've created dependencies between tasks, e.g. Task A depends on Task B etc. To be that means, that task A can't be started before Task B is complete. However i can't see how i can reasonably see that reflected on the gantt Chart. I would expect red arrows to be used, but instead the dependent becomes a child... that's not right.

More to that, if i amend the duration of the task in Gantt Chart by drag-and-dropping, it doesn't reflect in the Resources section of the screen which is still using the arbitrary start/end date of the original task. And the task start-end date don't get affected either.

I have about 15 team members, all of them with some special powers, and i've used Teams to specify it. Some people have more than one power, so i can assign them 50/50 or similar.

I would like to allocate teams, and occasionally individuals, to calculate my real capacity. What is the easiest and simplest way to do this, with the combination of the above?

First of all please take under consideration that the general rule of structuring tasks is that the order of the structure builders is important and determines the resulting structure. When conflicting structure builders are enabled, your tasks will be nested under only one of the builders.
Components are subsections of a project used to group data while versions control the scope of the release. Components and versions used together will create separate branches in the task structure. Depending on the order of the structure builders, an issue once nested under one of them will not move.

We need more information to properly diagnose your problem and propose an effective solution. Please feel free to contact us through our support portal and share more details of your use case and we will do our best to help you configure your plugin to work properly.

In the meantime, I would like to ask you to explain what activities do you mean by “When I update the Version” and which version (Claud or Server) do you use.
If its Server version please update it to the latest version (BP 7.11 will be on Marketplace around 20/03/2020) and check if your Program is in “auto bottom-up” mode. Please notice that versions are added to Gantt Chart as tasks in auto top-down, which prevents recalculation of their period based on children's dates.

By default, the Start / End date custom fields are mapped. The situation you described may happen when Link configuration (end to start link) is not mapped and at the same time structure builder based on this link is enabled. I enclose an image that will help you to set up proper values. Please make sure that ‘end to start link’ is mapped to ‘Gantt End to start’. 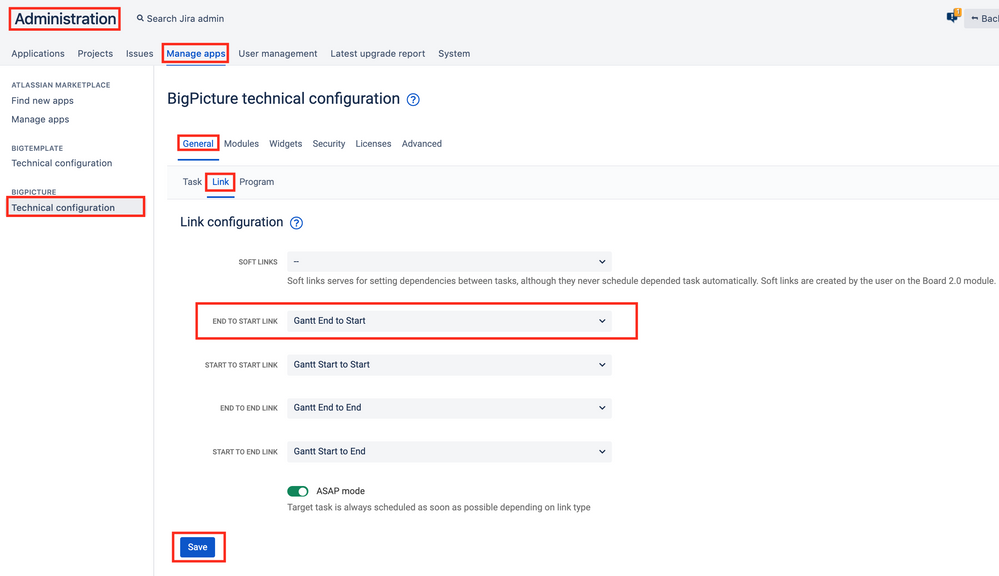 Moreover please notice that if the link is unmapped in Link configuration, you can use it as a link-based builder to build WBS structure on a Gantt chart.

In case of tasks duration changes that are not reflected in the Resource module, it needs to be further investigated so please contact our support portal.

First of all, you can assign skills to tasks and individuals then team skills are the sum of team members skills. Please follow How to manage skills article to find useful tips. Please, feel free to contact us if you have any further questions. If possible please share your specific use case so we can propose the most corresponding answer.

I do have a similar issue.

We built a small demo project in Jira using hardware, firmware and mechanical components and added a version 2.0.
We created a program in BigPicture from that Jira project - we couldn't get BigPicture to display the Gantt as expected:

While another gantt plugin (which has way less options than BigPicture has) displays the project as we exprected: 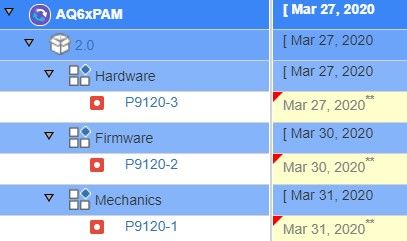 Can you help us here?

Thanks and Best regards,

Components are subsections of a project used to group data while versions control the scope of the release. Components and versions used together will create separate branches in the task structure. Depending on the order of the structure builders, an issue once nested under one of them will not move.

Let me know if you have additional questions.