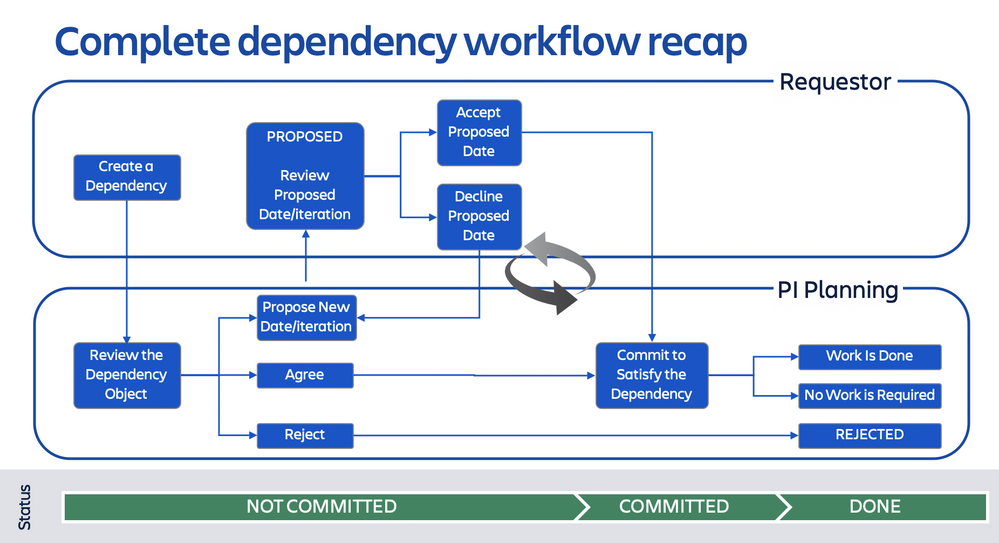 You now create a dependency, requesting Team is Baltimore and requested (depends on) team is Cowboys and the dependency is needed by Sprint 25 of the PI 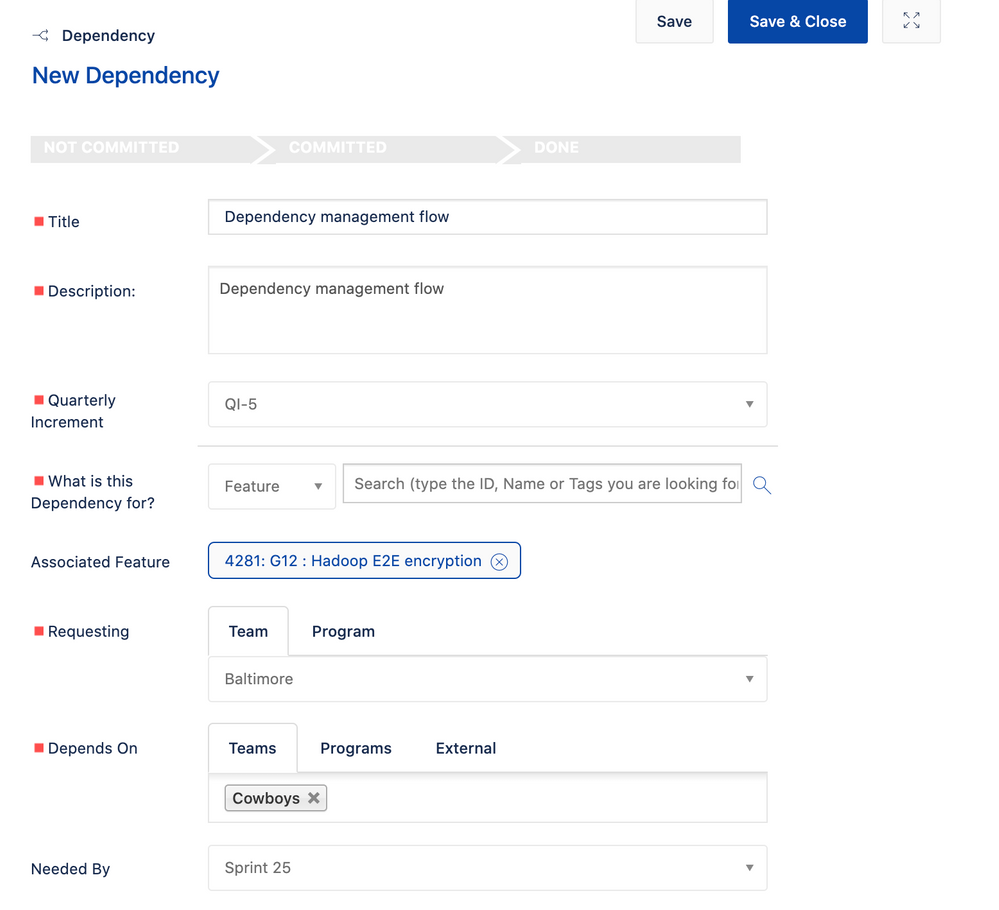 Now, the dependency has been created. It will now start showing up in the “ToDo” list of the dependency grid view of the stakeholders of the Cowboys team.

As you can see in the below image, once we access the Dependency grid view (under Program on the left blue navigation bar) then in the “To Do” section we can see the dependency. This is working like this because I have added myself as a member of the Cowboys team, hence this view will be visible to the members of the “Depends on” team which is Cowboys in this case. 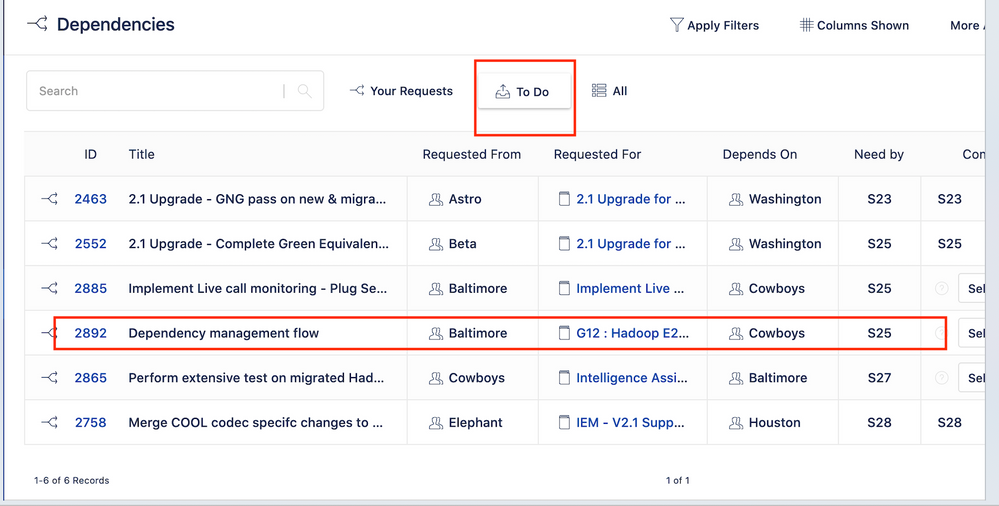 Now, lets look at the two most probable options for Cowboy stakeholders - Either you Agree to “Needed by” sprint and commit to the dependency or your propose a new delivery sprint 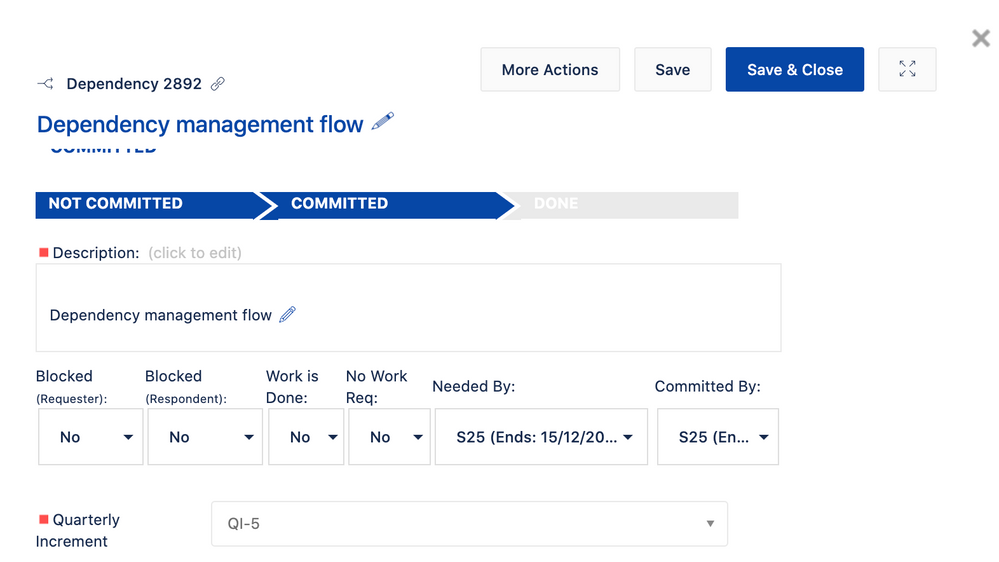 As you can see in the above image the dependency is now committed and the “committed by” sprint is S25, this could have been any sprint upto S25 i.e. also S23, S24 etc as all these sprints are before the “needed by” sprint which is S25 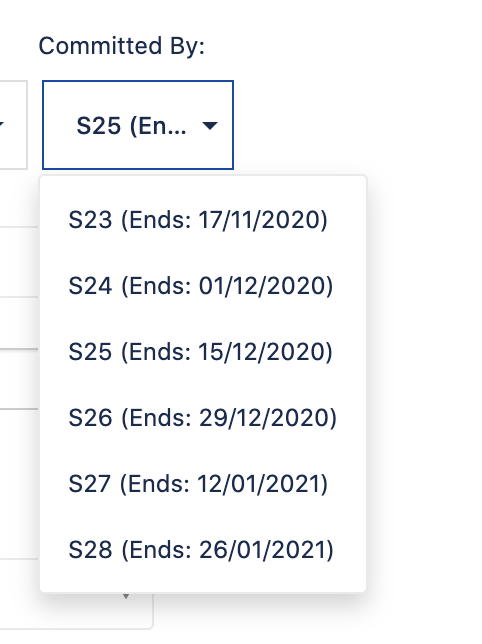 Till now, we know that if we pick a sprint upto the “Needed by” sprint then we are in the “happy flow” of things but what if your team doesn’t have the capacity to work on the dependency by S25 and instead you want Commit to the dependency at a later sprint.

In this image, you have “Committed” to the dependency at a later sprint i.e. S26 which is after the “Needed By” sprint and thus you get the option of Proposing the new Sprint to the original requesting team (Baltimore) and seek their agreement on the fact that now the dependency can be delivered at a later sprint then what was initially expected (needed by) by the Baltimore team 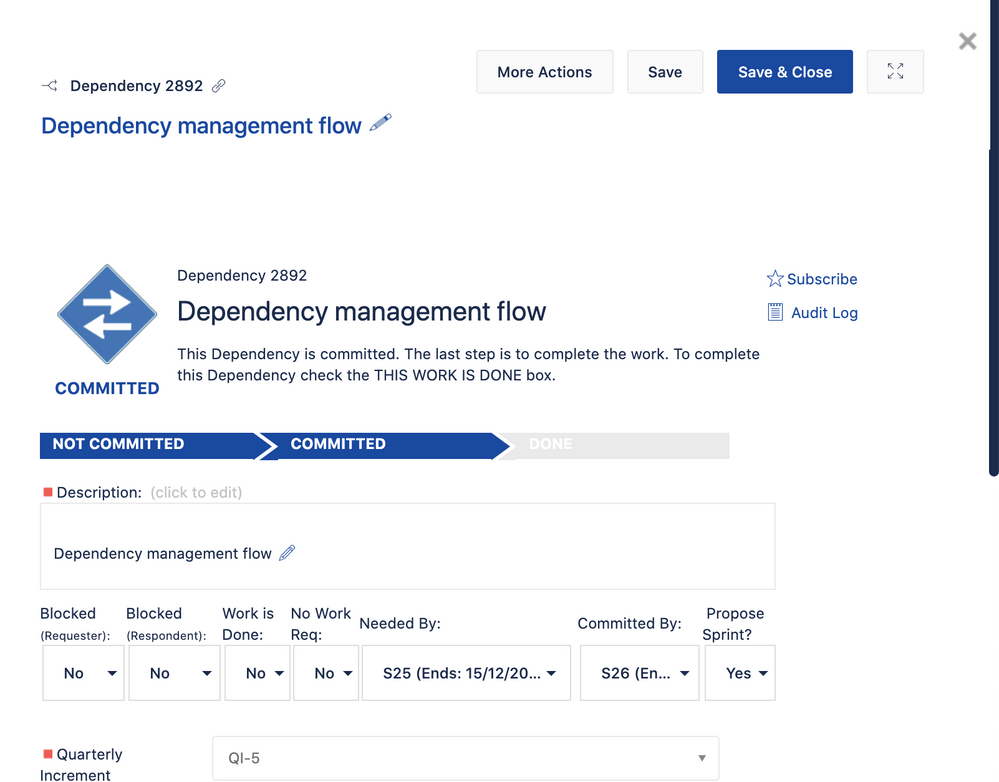 Once you save this change and since you have proposed a new sprint hence the dependency will move back to “Not committed” phase.

Now, the members of the original requesting team (Baltimore) will get the following view in the Dependency grid view (under Program on the left blue navigation bar)

Since the Cowboys team have committed to a later sprint S26 hence now the Baltimore more can either “Accept” or “Decline” this offer.

And this is how the dependency object looks 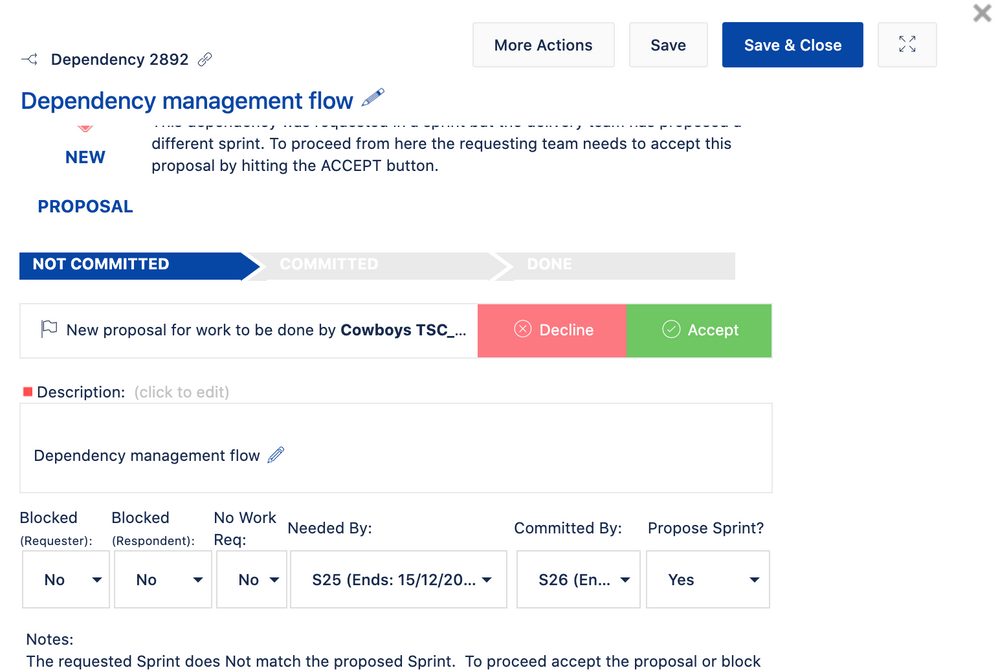 Now, the moment Baltimore team “Accept” the Sprint proposed by the Cowboys team then automatically the “Needed by” sprint is changed to S26 and dependency goes in the state “committed” 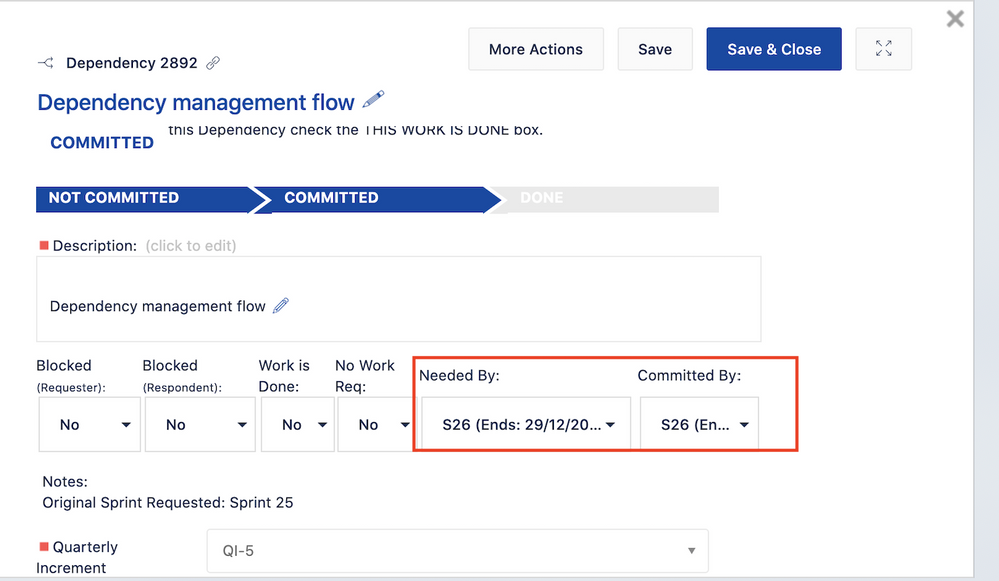 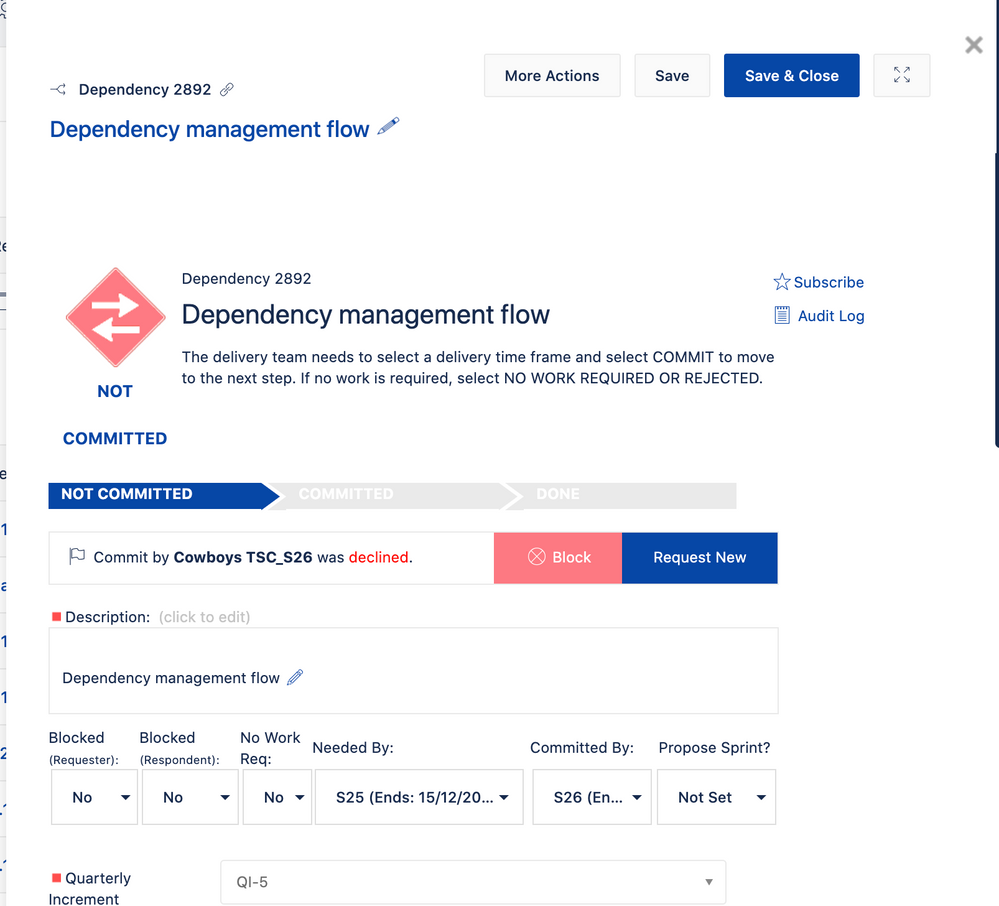 Once the click on “Request new” the whole flow of proposing a sprint by one team and accepting by the other will start again just like what we saw till now, but they can also block the dependency (as visible in the image below). 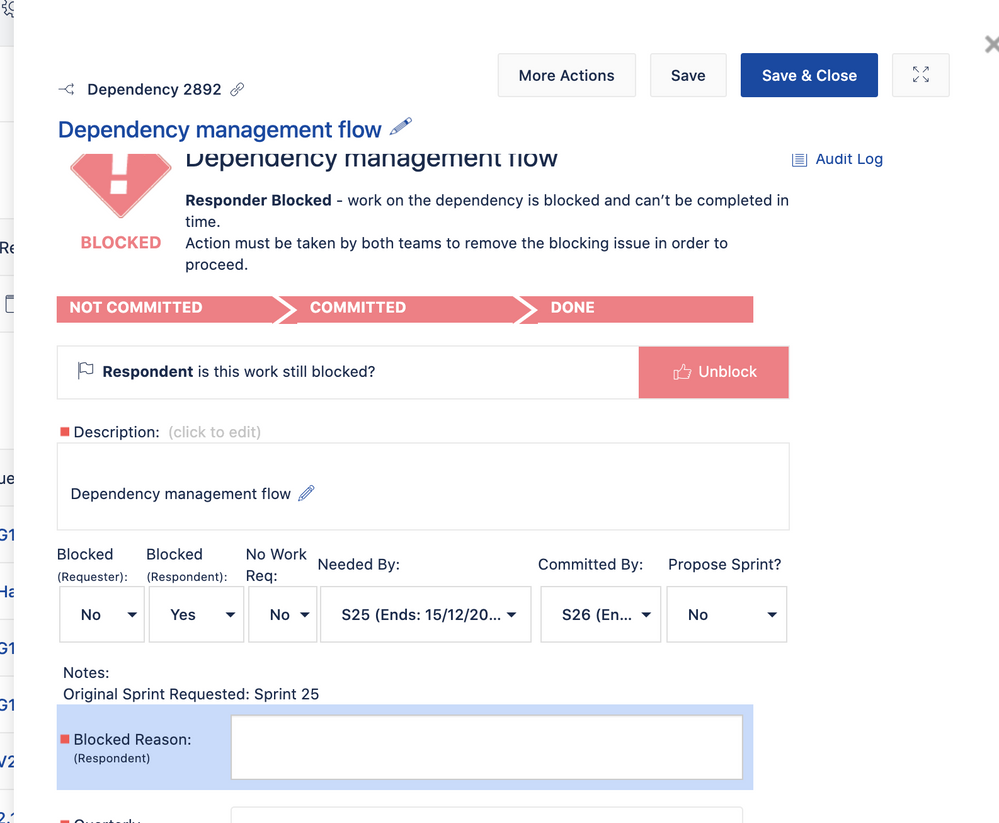 In this writeup we looked in detail at what to expect at every step of the dependency workflow in Align and how the complete flow works end-to-end.

Thanks for the detailed explanation, Tarun.

How do we maintain dependencies between 2 Jira Align Programs?

Hello @Thomas A Mathews  - For the dependencies between 2 programs, you need to first make sure its enabled in the "Manage dependencies" section under platform settings.

Different dependency views like grid / wheel view can be used for keeping track of dependencies b/w 2 Align program, but ofcourse most important here is the actual collaboration/communication between the program team for the resolution of the dependency.

Also you can use "email notifications" to schedule alters to relevant stakeholders when dependency is created -https://help.jiraalign.com/hc/en-us/articles/360018773733-10X-Set-Up-Alerts-and-Notifications

very good explanation. Thanks for that.

With regards to the dependency flow and the needed handshake between requesting and requested party, the chat functionality within a dependency comes quite handy in order to quickly discuss and negotiate things.

I have seen that within a dependency chat, one can tag other users with @<username> in order to notify them, just like in discussions within Epics, Capabilities, Initiatives, etc., where they will get a corresponding email notification. However, for dependencies no mails seem to be generated when tagging other users. Can you confirm this?

As per the docs, below is the list of work items that support notifications via the discussion link - 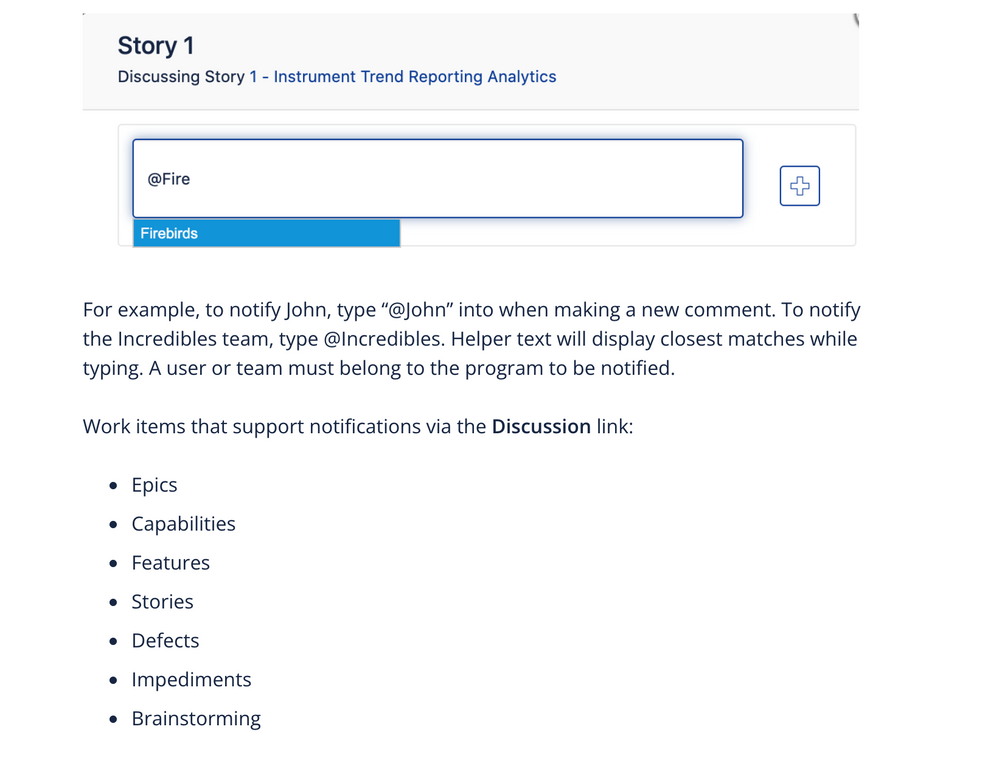 I hope this answers your question.

For example  Team B have a dependency on Team A to deliver feature A, so that Team B can deliver their feature B.   Feature B is the one referenced in the dependency in Jira Align.  Is this correct?

The use-case which you have defined, in this you can have feature B connected to the dependency object. And this use-case is more of a "work sequencing" issue instead of regular dependency management.

The intent behind dependency management in Align is that teams collaborate together to deliver solutions i.e. basically a contract b/w the two teams. The idea is to trigger the right conversations by making things visible across teams and across programs.

So yes, "work sequencing" is also something which you can leverage dependency management for, but you can also use for example, roadmap view with the right start and end dates to get a view as to when a feature ends and the the other one starts.

Are these dependencies between teams from different programs? Seems if teams were in the same program, the use of predecessor/successor would be better? Please advise.

Thats a good question, yes we can use the "predecessor/successor" links when the number of teams are less, but as an RTE if you have 10 teams in your train and even if the dependencies are within the same ART/Program then Align supports some excellent views (grid, wheel view) apart from the information on the program board.

Thus using the dependencies map and program board with dependencies will give you a much more holistic view of all intra and inter program dependencies and thus ability to make more informed decisions.

Also, if the number of dependencies are high with in the same Program then that might be the signal towards too many hands-off taking place for the work to be delivered or teams formed as components teams instead of the possibility of exploring the formation of feature teams.

Thank you @Tarun Sapra that is valuable details. Appreciate the follow up.

@Tarun Sapra How can a story be linked to the DEPENDENCIES created by other team. Suppose, there is a dependency created and is assigned to Respondent team.

1. Should Respondent team create stories in JA-Dependency under the "Assigned Stories" section like shown in the attachment?

3. Create stories in jira2 and link the Requested Team EPIC? 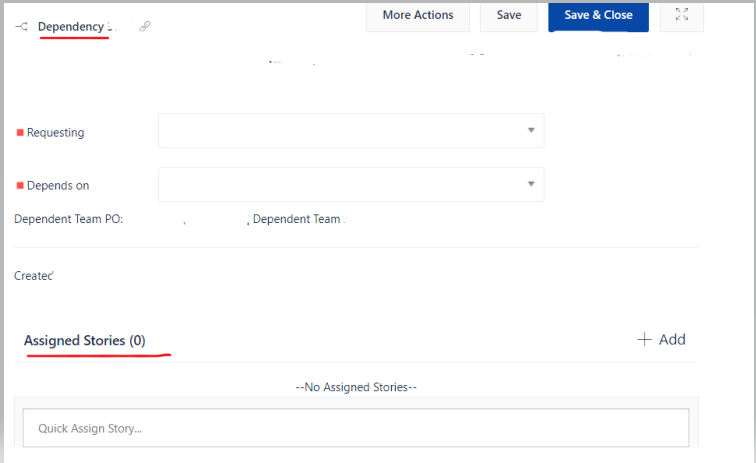