How to unwind a failed Confluence Server 7.x install on Linux: what's my path forward? Edited

I'd rather not poke around randomly: Don't restore w/ conversion until you're the whole way up?; How to get "install" to launch into web app again anyway?; Java weirdness?; Blow away n recreate empty target DB?; other...

What's the best path forward is from here? Perhaps there's some factoid that'll tell me one thing to unwind? How the restore failed or stalled install at that point? How to try the built-in demo site, to confirm function?

This is a sandbox so system, dependency, side-effect and cruft are contained. I'd still rather not wipe the install to clean this up.

Additional info: Any suggestions? Anybody? Bueller?

Confluence had problems starting up. Could not load from environment. NullPointerException. (See attached pic.) Logs not available via app link. 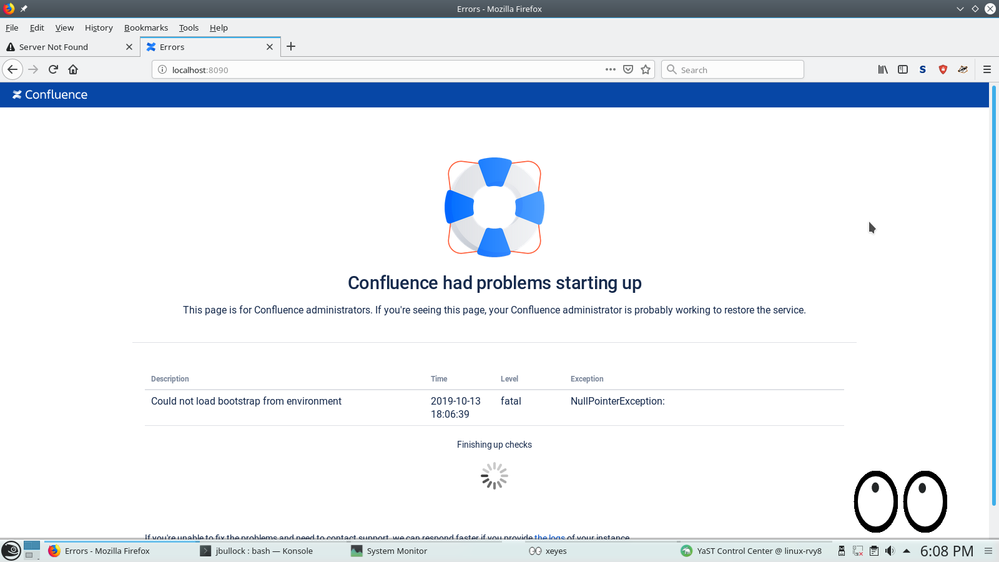 So, working hypothesis is that despire the "<version>.bin" running without reported errors, the captive account running the application ("confluence") reads in some wrong Java weirdness.

Just what I was hoping to avoid dealing with by running the installer. (What good is dropping in your own JRE if the wrapping setup program doesn't make the captive user it creates point to that?)

Not an anser yet. This is incomplete, hacky, doubtless part wrong, and makes no sense.

FWIW, legacy install of Confluence 6.x on OpenSuSE 15 years ago *did* install and configure, but *would not run*, traced to residual runtime environment reference to system OpenJDK, overcome by hand-asserting JAVA_HOME in Confluence run-time startup scripts.

👋 Hi there, a few of us at Atlassian would love to learn about how you use "space settings" functionality in Confluence. A facelift to the space settings is long overdue and we want to start with im...