Confluence and Jira won't connect after migration to a new Server

We then had help from our Atlassian Partner and tried to figure this out. We couldn't. We wanted then to connect all the Instances new. So from Jira to 1 and from Jira to 2.

The Problem now is that we get an Servererror (Picture1), which says (translated from German):
This Application has the same ID as me. I can't connect to myself.

This errormessage comes after in Jira I put the Confluence-URL in the Box (Picture2) and press "Neue Verknüpfung erstellen".

These three Instances (2xConfluence and Jira) are on separate Servers. It seems that an ID from Jira is still the same as one of the Confluence instances. They were on the same server before we separated them. From Jira to "2" it connects without a Problem. This Instance was never on the same Server as Jira. 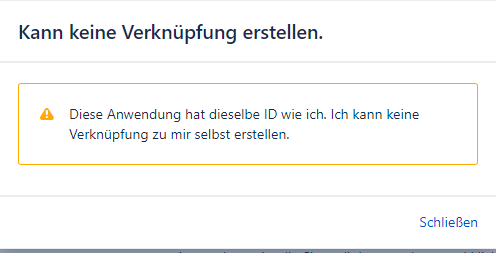 @Bastian Ouwehand did you do a fresh install on both 1 and 2?  Are you using a separate license for each server?