I've been using repository variables on pipe.sh to hide some credentials upon using the pipe. See the screenshot below:

I'm getting this error, although the variables are already declared under Repository Variables. 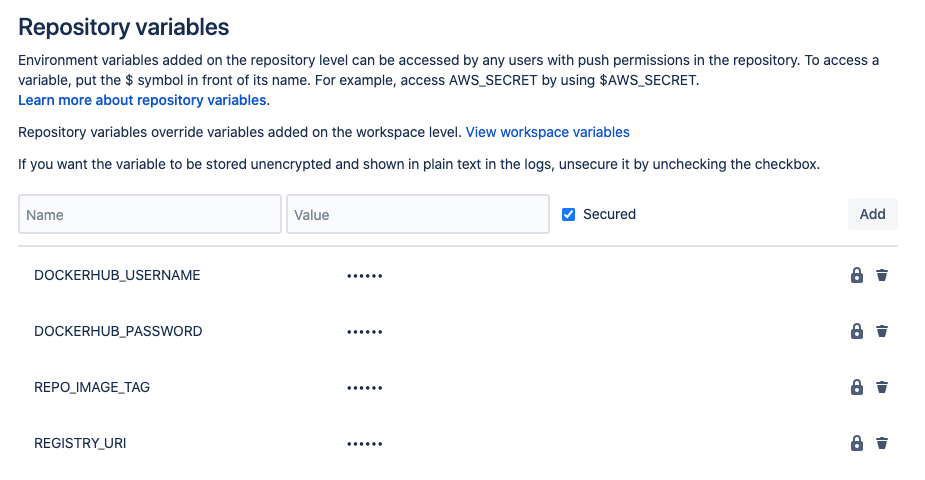 I've already tried some possible steps to solve it, through declaring it on Workspace variables and inside the Environment Variables. But I'm still having the same error.

I wonder what would be the reason of this error?

I hope this question make sense. Thanks for answering.

Hi Bencel and welcome to the community!

At first glance, I don't see any obvious reason for this behavior, nor am I able to reproduce it.

Would it be possible for you to add the following commands in your bitbucket-pipelines.yml file, before the bats test/test.bats command, and let me know what is their output in the Pipelines log?

I would just like to check if these commands give the expected output when executed from the bitbucket-pipelines.yml file or if we also see an error there. If it's the first case, it would indicate that this issue may have something to do with the script. However, if we see an error in both cases, we'll need to check if something is wrong with the variable itself.

Hi Theodora! Thanks for responding to my question! But I've fixed this already by putting this codes on test.bats:

It was my first time making a pipe. I wasn't very familiar with the codes I need to put in or not.

But anyways, thanks for your time.